Disaster in the Making: Mexico City Short of Water 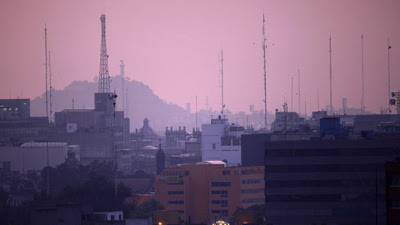 In that time, the swine flu fears that gripped his country have peaked and subsided, though the government has urged residents to continue their vigilance with extra cleaning and hand washing.

“We need to clean more often than before because, like they say, you needed to maintain your house clean and wash with Clorox and everything,” Sandana told CBC’s The Current. “You can’t do that ’cause you don’t have enough water to do it.”

Sandana, his wife, Elizabeth, and his 8-year-old son, Samuel, are lucky enough to have a storage tank under their house, unlike others in their poor neighbourhood in Iztapalapa, a federal district in the city’s east end. But that too is running dry and he must sometimes purchase water.

Even when water flows from his faucet, Sandana says it’s brown and “terrible” quality, despite pipes being replaced several months ago.

Jorge Villalón Efrén Figaredo, a general director with Mexico’s National Water Commission, known by the Spanish acronym CONAGUA, says the neighbourhood where Sandana lives is at the end of the water pipeline, about 100 kilometres from the source. As a result, the water pressure and volume is insufficient to reach the highest parts of the neighbourhood.

But the problem is larger than one neighbourhood. The sprawling metropolis of 20 million people is struggling with a crumbling water infrastructure and serious shortage of the precious resource.

Three times this spring, water has been cut off for hundreds of thousands of people due to dangerously low reservoir levels.

The city relies on the Cutzamala system, which pipes in surface water from the Cutzamala River basin, for about 20 per cent of its water, while 70 per cent is pumped up from underground wells.

“That’s a problem because the city is sinking 10 centimetres per year due to the amount of water we are extracting from the wells, which is equivalent to 60,000 litres per second,” says Villalón.

Mexico City was founded by the Aztecs on what was once a great lake, but Spanish conquerors later drained most of the water to allow for expansion.

As the city sinks into the old lake bed, pressure is building on water pipes, causing them to leak about 40 per cent of the liquid before it even reaches its destination.

Though the city holds out hope that the coming rainy season will replenish its reservoirs, Villalón says the government is investing “a lot of money” in water projects, including finding new sources and raising awareness about water conservation.

Mexico City residents use about 300 litres of water per person each day, twice what Europeans in some cities are using.

“We are using 50 per cent more than in other parts of the world and we need to change that,” said Villalon.

But Villalón notes the government is facing a tough task. Even if the city can find additional sources of water and reduce consumption, demand for water is expected to rise by 20 per cent over the next three to four years as the population grows by about four per cent each year.

David Stahle, a geoscience professor at the University of Arkansas, says since 1994 Mexico has been in the midst of one of the country’s worst droughts.

For Piet Klop, a senior fellow with the environmental think tank World Resources Institute, it all combines to suggest Mexico City, like many other metropolises around the world, has reached a tipping point.

“I think in many cases — and Mexico City may be a case in point — we’ve actually gotten to the point where politicians may not have any other choice than to fix the system,” said Klop. “We got used to the idea that water would be free … That’s one philosophy that can no longer be maintained.”

As dozens of mega cities such as Mexico City, Jakarta and Bangkok face water shortages and growing populations, Klop expects many will begin to start pricing water according to its actual cost and scarcity value.

“We’ve got to price water as though it was oil,” he adds.

By providing low-priced, subsidized water, he says, the city robs itself of having enough revenue in its coffers to maintain the system, plus eliminates an incentive for people to use water more efficiently.

To ensure the poor do not suffer due to a drastic rise in prices, Klop suggests subsidizing the price they pay.

“In many places around the world … the poor indeed suffer from service and scarcity problems like the one of Mexico City. Per litre they pay 10, 20, 50 times as much as others fortunate enough to be connected to the network,” he said.

As a result, water conservation for the poor, like Sandana, is already part of daily life.

His family scrimps on water use, foregoing showers in order to have enough water to cook with.

“You can’t just really throw it around. So we’d rather save it because you don’t know if you spend that bucket of water, when are you gonna get water again.”