Dr. Stephen R. Keister : ‘Citizens, There Is No Time to Lose’ 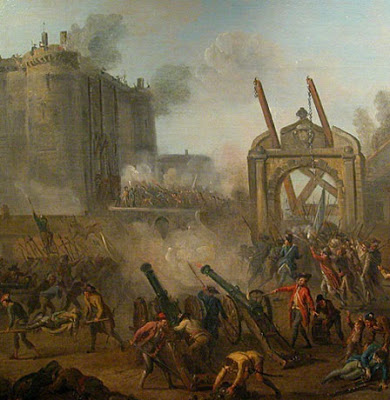 Leaping on a table, a pistol in each hand, Camille Desmoulins cried, ‘To the Bastille.’

‘Something in my subconscious clicked last night, and part of the time I lay awake considering the report in The Washington Post about the drastic cuts in Medicaid due to the economic collapse in the United States.’

It is said that young men see visions and old men dream dreams. Last night I dreamt of a scene in a motion picture that I saw at about the age of 14, in 1935. The picture was “A Tale of Two Cities” and in an opening scene an aristocrat’s carriage overran a small Parisian waif without slowing down or stopping. The result, not noted in the motion picture, was one Camille Desmoulins, leaping on a table, a pistol in each hand, and crying “citizens, there is no time to lose, to the Bastille.”

Something in my subconscious clicked last night, and part of the time I lay awake considering the report in The Washington Post about the drastic cuts in Medicaid due to the economic collapse in the United States. In addition I had watched the PBS news report of the California deficit, the response in the state legislature by the Democrats to alleviate it by raising taxes, and the Republican answer, i.e. further reduce taxes for the wealthy and drastically curtail social programs, including Medicaid. People in shelters, eating in food lines, and “cut their social services!” It called to mind Anatole France’s comment, “It is only the poor who are forbidden to beg.”

Further, yesterday afternoon I had read a Commonwealth Fund report about how poorly the chronically ill fare in the United States in relation to seven other nations, i.e. Australia, Canada, France, Germany, The Netherlands, New Zealand and The United Kingdom. More than half (54%) of chronically ill patients in the U.S. did not get recommended care, did not fill prescriptions, or did not see a doctor when they were sick because of the cost, compared with 7% to 36% in the other countries. (France and the Netherlands scored the best.) About one-third of U.S. patients — again, the highest proportion among the eight countries — experienced medical, medication, or lab/diagnostic test errors, with a similar share encountering poorly coordinated care, including duplication of tests or medical records that were unavailable at the time of an appointment.

The Commonwealth Fund has been doing excellent objective work in tracking health care in the United States; however, I am perplexed that they do not at length liaison with Physicians For A National Health Program (PNHP), or overtly support Rep.Charles Rangel’s bill in the House of Representatives, HR 676, which in essence is based on the PNH recommendations. HR 676 has something like 90 co-sponsors, but the House leadership has allowed it to languish in committee without debate. Of course, it causes one to wonder what obscene, financial incentive has caused the inaction in a Democratic controlled Congress.

A few words regarding Medicaid which is federally mandated and federally funded per formula, but under which each state is required to outline its own allocation of the funds. In many or most states, with the current depression, the funding is inadequate. This is extremely sad, for at best, Medicaid pays for a degree of medical care normally seen in third world nations. Prior to my retirement, 18 years ago, we were struggling in our office about how to accommodate Medicaid patients, in view of the fact that our income was consumed by over 55% overhead, and that the Medicaid payments were approximately 50% of our then not excessive fees for specialists in Internal Medicine. Thus, we were required to assign one morning a week for care of these folks. The next problem encountered, and we saw this again after my retirement when I volunteered at St. Paul’s Neighborhood Free Clinic, there was great difficulty in obtaining more sophisticated procedures such as CT Scans or MRIs, or consultations with surgeons, orthopedists, neurosurgeons, etc. Care was definitely restricted because these were poor people. Now many states are having to cut back care even further, thanks to the depression caused by the neo-liberal economics instituted during the Reagan years in the White House that has finally decimated our nation.

Yet, this is only the tip of the iceberg. Last month alone, employers slashed 533,000 jobs — the most in 34 years — with the jobless rate rising to 8.4%. With the loss of employment, of course, goes employer paid health insurance, as about 60% of American workers are covered by work related health care plans. Of course, through the COBRA provision the worker may take over his own insurance at an average of $4704 per year for an individual or $12,680 for a family, according to a survey by the Kaiser Family Foundation & Health Research and Educational Trust.. Other private insurance is offered but may include a deductible per year of $1000-$5000. Totally unaffordable.

We undoubtedly face a spiraling crises in health care. There are two viable plans on the table. And let me repeat: “viable.” There are several Senate versions being discussed but these are basically selling out to the insurance industry. Hence, the two: (1)the Obamaplan which still maintains private health insurance, but institutes a “Medicare for all” option for those without health insurance, or those who would elect to switch to it. This would be administered by a public “insurance company” with government supervision and provide coverage similar to that provided to”members of Congress,” and (2)the plan incorporated in HR676, single payer, universal health care, which is discussed in detail at the PNHP website. I personally, as a member of PNHP and The American College of Physicians, which has endorsed the plan, would prefer the second; however, either would be preferable to the travesty that exists for health care in the United States and its domination by the insurance industry.

If I may be permitted a few thoughts about the insurance industry. When I think about the pitch of the insurance companies to the naive American public I think of Edith Sitwell’s comment, “The public will believe anything, as long it is not founded on truth.” Right on! In some way the American public looks at the insurance industry as a benevolent ally. Not so. An insurance company, like any corporation, is out to make money for its owners, managers and shareholders. The practice of medicine was coopted by the collusion of the insurance companies some 30 years ago in the guise of the HMO or IPA, advertised to the medical profession and public as having the advantage of cost containment and efficiency. Indeed there was containment, containment of adequate care to the patient (now known as “customer”) and income and ability to make his/her own decisions to the physician (now known as “the provider”). There have been record profits for the insurance industry, record salaries and bonuses for the CEOs, and a record amount of money spent lobbying our elected representatives. The Bush administration, like the Reagan administration earlier, has encouraged the insurance takeover. The Bush administration passed the Medicare prescription plan, which is a limited value to the patient but provides an ongoing excessive profit to the insurance and pharmaceutical industries, Further, masked as a great bargain to the patient, the Bush administration has flummoxed the public with “Medicare Advantage,” a subtle method of depleting the Medicare Fund and turning the management over to the private insurance industry.

I started my practice in 1950 and shortly thereafter came face to face with the insurance industry. In those days folks were sold “health insurance” by door to door salesmen who would stop by to pick up their premium, of, let us say, $5 per week. Thus, if ill or incapacitated, the insurance would pay a fixed amount a month for defraying hospital costs, doctors bills, etc. I remember well, one elderly lady who developed cancer of the stomach, and was told that the disease predated her purchase of the policy some ten years earlier. Of course, this was absurd. I turned the matter over to The Pennsylvania Insurance Commission and the lady was paid forthwith. Thus, I learned, early in my career that one should always “read the fine print” and if fraud was evident that the Insurance Commissioner would indeed be a great friend of the public.

Be sure that the insurance companies will spend billions of dollars on frightening the public via TV Commercials, and will spend like mad with our elected representatives to oppose either the Obama or PNHP plans. We will hear of the imperfections of health care in Canada or the UK. We will see unhappy folks (either actors or malcontents) demeaning the care in other countries. We will hear that we are going to have “socialized medicine” thrust upon us. (We already have it in the V.A. System and Medicare). We will hear that it takes forever to get a doctor’s appointment in Canada, which may well be true, as it is in the USA, if one wants a specific doctor at a famous institution. The American public is in for an indoctrination that would make Joseph Goebbels proud. Remember, in every nation there may be some hitches in medical care; no system is perfect. However, most European systems, Canada, and Australia have a near 90% approval by the citizens. In all these other nations one has free choice of family doctor, specialist, or hospital, and in most instances the GPs still make house calls and communicate directly by telephone with their patients rather than relegating that duty to nurse or PA.

Unhappily, most physicians away from medical centers, are not politically educated. As a matter of fact, the hierarchy of our local county medical society felt privileged tosit behind President Bush on the podium when he campaigned locally in 2004. Hardly intellectual sophistication! Yet most doctors, if you as patients discuss the matter with them and provide the PNHP website, may well get aboard. Many are tired of the hassle and malpractice exposure provided by being subordinates of the insurance industry. I have approached my personal internist, an excellent physician, who has a rightful concern. “If 49 million people without insurance are enabled to choose their own doctor, there are not enough of us to go around.” True. Thus, in view of the fact that the average medical student graduates with $120,000 tuition debt and hence opts for a well paying specialty, thus not providing enough family doctors, I would suggest that one of two things be included in either plan. My suggestions, with each having the qualification that the graduate would do general practice in an under-served area for a specified number of years: (1) Government subsidy of tuition for qualified students at existing medical schools, or (2) a “medical academy,” similar to West Point or Annapolis, to train healers. If we can train to kill, we can train to heal.

We have a difficult task ahead. There are a great number of folks nationally trying to get decent health care in this country, so please sign on. Contact your representatives, first ascertaining his/her connections to the insurance industry at Open Secrets, and demand that either the Obama or PNHP plan be enacted. If your representative or senator is a Republican, ask him to show some Christian Charity to the poor, the dispossessed, the halt and the blind. Ask him to set aside his belief in the flawed economic theories of Milton Friedman, as they did not work in Chile or Argentina. Request that HR676 be debated by the full House. Perhaps then we will not be required to storm the Bastille.

1 Response to Dr. Stephen R. Keister : ‘Citizens, There Is No Time to Lose’