Dubya : Texas Tried to Warn Us 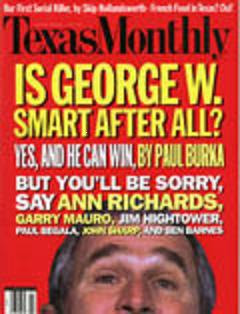 I think the best state magazine in America is Texas Monthly. As a native Texan living away from South Texas for decades, my annual subscription to TM has been a lifeline to my deep Texas roots. The July, 2000 issue should have been required reading for all registered voters in America. The cover, seen at left, asked the question about the then Texas Governor, “Is George W. Smart After All?”

Senior Executive Editor, Paul Burka’s article was titled, “Yes, And He Can Win'” A follow-on article, “But You’ll Be Sorry!” contained personal observations about Bush from six noted Texas politicians and political analysts. Former Texas Governor, Ann “Ma” Richards, who was beaten by the young George W. in 1994, wrote,

“To his credit, George Bush is a disciplined campaigner. He stays on message . . . He seemingly does not tire of saying the same thing over and over and over again. If you ask me what time it is, I’m likely to tell you about the history of timekeeping and clock making . . . . If you ask George Bush what time it is, he’ll say, ‘I think Americans have the right to bear arms.’”

“One, the smirk. This is not a facial tic. This is from within. It reflects a spoiled brat’s sense of entitlement and a mean streak that we’ve seen flare up. I think that Bush’s sense of privilege is going to grow real tiresome real fast. The more you get to know him, the less you get to like him.”

“Two, deep down, this guy is shallow. His one hundred experts and fundraisers and media handlers and powderers and puffers have done a good job so far of keeping his shallowness under cover.”

“Three, he is a corporate wet dream, a loyal performer for the fat cats who’ve put money in him. If the voters and the media focus on the favors he has done for rich people, they’ll see Bush for what he really is: a hired hand for corporate interests. That’s not what the general public wants its president to be.”

Hightower had Bush nailed, but his prediction was wrong. Americans, elected W. anyway by the thinnest of voter margins, finally decided by the Supreme Court.

Prophetic stuff. Problem is that it has taken eight years for too many Americans to finally discover all this for themselves. John McCain is frantically trying to replace George Bush in a last minute game of political Whack-a-Mole. McCain keeps popping up, learning new lines, yelling, “My friends!” throwing out last-minute non-Bush economic promises. But what about the hapless hockey mom, who would be next in line as president? Even NASCAR GOP abductees must be thinking that over.

2 Responses to Dubya : Texas Tried to Warn Us