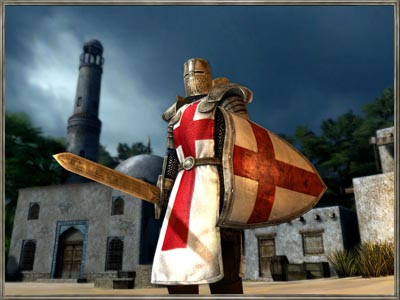 Warrior for Christ. Image from The Crazy Crusades.

A warrior for Christ:

The consecration of Rick Perry

You call us to repent, Lord, and this is our response. We give it all to You. For Thine is the kingdom and the power and the glory, forever. Amen and amen.

Why do we need to repent? What is our sin? Earlier, he had said,

As a nation we have forgotten Who made us. Who protects us. Who blesses us, and for that we cry out for Your forgiveness.

Perry has accepted our sin of forgetfulness, and he has assumed our repentance, and he has offered it up to God. It is the sin of the Israelites who lived wantonly and forgot God when they were chastised by the prophets. He has cleansed us in the blood of the sacrificial lamb. He is the minister, the priest, the substitute sacrifice.

How do we know we have offended God? “We see discord at home. We see fear in the marketplace. We see anger in the halls of government.” According to Perry, these signs are proof that we have sinned against God, that our government has angered God and incurred his wrath.

By offering to quiet this discord, calm this fear, and soothe this anger, Perry’s offer to intercede for us seems a lot like Hitler’s offer to restore order after his Storm Troopers burned the Reichstag.

Father, our heart breaks for America.

He remembers the 30 U.S. soldiers killed the day before in a helicopter crash in Afghanistan:

We pray for our military and the families who love them. Father, especially for those special operators who lost their life yesterday in defending our freedoms.

One of the women whose husband had been killed told CNN that her husband “was a man with a deep Christian faith. A wonderful husband, and fabulous father to two wonderful children. He was a warrior for Christ.” A warrior in the Christian crusade against Islam? Is that why no Muslims were invited to the prayer rally?

Perry quotes extensively in the earlier part of his short speech from Chapter 2 of the Book of Joel from the Old Testament. He ends with verse 17:

Spare thy people, O LORD, and give not thine heritage to reproach, that the heathen should rule over them: wherefore should they say among the people, Where is their God?

Are we at war with the heathen? Is this a crusade?

Blow the trumpet in Zion, sanctify a fast, call a solemn assembly: Gather the people, sanctify the congregation, assemble the elders, gather the children, and those that suck the breasts [he actually cut this last part — clearly he didn’t want to offend his audience by mentioning a woman’s breast]: let the bridegroom go forth of his chamber, and the bride out of her closet.

Perry is calling for the congregation to gather and ordain him as their minister, a warrior for Christ on a crusade to smite the heathen.

Perry read only the part from Joel that speaks of the consecration of the warrior. In all fairness, he should have also read Joel’s description of the upcoming battle. Joel begins:

1 Blow ye the trumpet in Zion, and sound an alarm in my holy mountain: let all the inhabitants of the land tremble: for the day of the LORD cometh, for it is nigh at hand;

2 A day of darkness and of gloominess, a day of clouds and of thick darkness, as the morning spread upon the mountains: a great people and a strong; there hath not been ever the like, neither shall be any more after it, even to the years of many generations.

Joel is speaking of a holocaust, a scorched earth and total annihilation of the enemies of Israel.

Is this the God that Perry offers us — the Old Testament Jehovah who cheerfully murders women and children?

Is the lesson of Jesus Christ and the New Testament too radical for Rick Perry? The story of Jesus is very simple, very plain. He preached in the countryside and after three years he marched into Jerusalem and with his followers drove the moneychangers out of the Temple. For this he was arrested and crucified as an enemy of Rome.

The four gospels differ on many details of the life of Christ, but they agree unequivocally that Jesus marched into Jerusalem, drove the moneychangers out of the Temple, and was executed by Rome.

Rick Perry and Michele Bachmann wear their Christianity on their shirtsleeves. They are quite public in professing their Christian faith. Do they believe in driving the moneychangers out of the Temple? They are both protectors of the rich, and they both advocate policies that would crush the poor. The rich are bankrolling their campaigns. They would bring down the Temple before they would tax the rich.

Bachmann thinks the best way to create jobs would be to eliminate the minimum wage. Perry has created jobs in Texas by driving down wages. The Texas Independent has said, “the median hourly earnings for all Texas workers was $11.20 per hour in 2010 compared to the national median of $12.50 per hour.” Texas tied with Mississippi for the greatest percentage of minimum wage workers.

Do they believe that Jesus drove the moneychangers from the Temple as a chauffeur in their limo, because that’s clearly what they’re doing?

37Then shall the righteous answer him, saying, Lord, when saw we thee an hungred, and fed thee? or thirsty, and gave thee drink?

38When saw we thee a stranger, and took thee in? or naked, and clothed thee?

39Or when saw we thee sick, or in prison, and came unto thee?

41Then shall he say also unto them on the left hand, Depart from me, ye cursed, into everlasting fire, prepared for the devil and his angels:

Why are Perry and Bachmann not the cursed, damned into everlasting fire? Why are they not the antichrist, the whitened sepulcher that hides corruption?

If they are going to trumpet themselves as Christians, then don’t we have the right and the responsibility to hold them accountable?