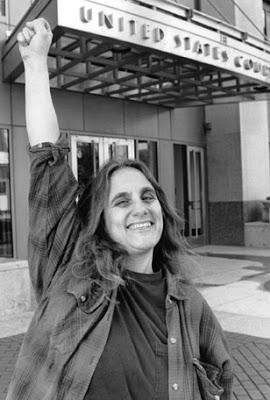 Judi Bari celebrates March 3, 1995, outside the Oakland Federal Courthouse after winning a round in her civil rights lawsuit against the FBI and Oakland Police. Photo by Xiang Xing Zhou / San Francisco Daily Journal.
Earth First! and the FBI:
The bombing of Judi Bari

Twenty years ago — on the 24th of May, 1990 — sensationalist headlines across the country announced the arrest of two leading environmentalists, Judi Bari and Darryl Cherney. Their car had been bombed — but it was they who were arrested, charged with their own bombing! The environmental activist movement and Earth First! in particular were branded as terrorist organizations.

This incident fell just after the very successful Earth First! campaign to save the old growth Redwoods, labeled “Redwood Summer,” that brought in young people from all over the country. They sang, they sat down in the roads, and they filled the jails like the old time Wobbly organizers, like Civil Rights activists, like the Peace Movement. It looked like the timber industry was in for big trouble.

But then the car bombing. What followed was an interesting and frightening revelation of political intrigue, collusion among the police, the FBI, and the timber companies.

This remarkable history is being observed with a series of “Revolutionary Ecology” activities and an historical exhibit in Berkeley on May 23, 2010, and with an anniversary observance in Oakland on May 24.

Judi Bari and Darryl Cherney filed a civil rights lawsuit against four FBI agents and three Oakland police officers, and in a landmark decision on June 11, 2002, a federal jury found unanimously against six of the seven defendants, saying they had attempted to frame the defendants in an effort to stop their political activities. The jury awarded $4.4 million in damages.

In an editorial on June 13, 2002, the San Francisco Chronicle said that the verdict “reminds law enforcement advocates that Americans are not panicked by the threat of terrorism into abandoning their civil rights… The overzealous pursuit of [Bari and Cherney] was unacceptable — and unconstitutional — regardless of what one thinks of the activists’ politics.”

Attorney Dennis Cunningham of the People’s Law Office in Chicago was interviewed by Michael James on “Live from the Heartland,” at Chicago’s Heartland Cafe, June 6, 2004.

James asks Cunningham about the outcome of the Judi Bari case, and for “background on who she was and what the case was about?”

Judi Bari was an environmentalist organizer with Earth First!. She and Darryl Cherney, another EF! Organizer, were bombed in their car in Oakland. A pipe bomb was put under the driver’s seat and rigged with a motion device that would ignite on the motion of the car. When the bomb went off the cops came — the FBI came right away — and they told the cops ‘we know these people, they are terrorist suspects, we’ve been investigating them, and we believe this was their own bomb and they were on their way to plant it someplace — you should bust them.’ Oakland cops say ‘okay boss’ and did.

They arrested them and charged them with possession and transportation of an illegal explosive device — it made headlines all over the country — the front page of The New York Times, and everywhere else — it was the top of the news around the country. They were vilified as terrorists by virtue of those headlines and by connecting them to the bomb, which in fact had been used to try to kill them or kill her. Judi Bari was a leading voice and an amazingly skilled, experienced, and persuasive organizer and public speaker — those who planted the bomb were out to shut her up. 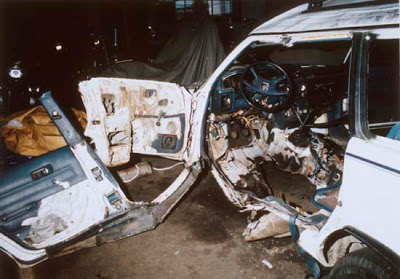 Michael James asked Cunningham why he thought Earth First! was the main environmental organization getting headlines at that time, and added that he heard they “had been chaining themselves to trees to trying to stop the cutting of the redwoods.”

True, true. They were organizing for a summer project. They called it Redwood Summer. They modeled it after the 1960s Civil Rights Project, Mississippi Summer — they were trying to bring people, students, and activists from all over the country to the redwood region to do direct action in the summer of 1990. They wanted to try to slow down the timber harvest and protect the old-growth redwoods.

A big local timber company in Humboldt County had been bought up by corporate raiders with junk bonds, to pay off the junk bonds, they tripled the timber harvest. There was an initiative put on the ballot for November that would have limited the clear cutting and the kind of destructive logging that they do now, which fills up the streams with silt and kills the fish, and kills the fishing industry, and leaves the hillsides unstable and prone to mud slides — a disaster. After the bombing, the timber companies hired a Washington public relations firm, Hill and Knowlton, to fight the ballot initiative.

And then as soon as the bombing had taken place Timber Companies labeled the bill ‘the bomber initiative… terrorists want to pass this thing, it’s too radical. Earth First! shouldn’t be allowed to dictate public policy.’ The Initiative ultimately lost by a point and a half.

A researcher concluded that there was more than three billion dollars in timber revenues that the companies had been able to realize in the 12 years since the bombing, that they wouldn’t have got if the initiative had passed. So there was a big motivation to shut Judi up, besides that she and EF! were reaching out to the timber workers.

Judi was trying to make common cause between the environmentalists and the workers, saying, ‘where you gonna work when the trees are gone?’ The timber industry is clear cutting as fast as they can. In Mendocino County at that time 95% of big trees were already gone, and they closed mills.

Judi led an Earth First! contingent and with a group of workers went to a county board meeting right after the big timber company in Mendocino announced it was closing the mills. They got up at the county board meeting and said that the board should take over the mill, preserve the jobs, keep the economy stable. For the timber companies that was pretty much the last straw. But they didn’t want to make a martyr out of her.

They hoped to shut her up for good. They thought they did, but she didn’t die in the bombing. It was a miracle she didn’t die. But then they had her accused of the bombing. Within three hours and five minutes of the explosion, they were under arrest.

James asked Cunningham when he got involved with the case. He replied that “Bill Simpich, a lawyer in San Francisco and Oakland, had started a suit against the FBI and the Oakland Police for false arrest, but that after he joined the group of defense attorneys they were able to reverse the charges so, in fact, they were able to accuse the Oakland police and the FBI of arresting Bari and Cherney on purpose in order to discredit them in a COINTELPRO type operation.

Cunningham explained that “COINTELPRO stands for Counter Intelligence Program — a J. Edgar Hoover undercover dirty operation that the cops used and that the FBI used against the Black Panthers, against the anti-war movement, against the Communist Party, against who knows…”

James commented that it was often used against anyone who challenged them.

Yes, everyone who seemed to present a popular threat against the status quo, they did what they could to mess up their work; and they didn’t have any boundaries of legality on what they allowed themselves to do. So there were frame-ups… the murder of Fred Hampton arose out of COINTELPRO operations…

We had a lawsuit that lasted 10 years and went to trial in 2002, in trial for about six weeks, and we were waiting for the jury for another three weeks. The jury came back with a 4.4 million total award for the two of them. It was half punitive damages and half what they call compensatory damages.

About 80% of the total of the money was assigned to the First Amendment cause — meaning that the claim that it had been done on purpose to mess up their political work was the thing that most appealed to that jury, and they gave the most damages for that. It was going to be appealed, and then we started talking about settling and getting it over with since by then it was 12 years of litigation.

James pointed out that Judi had since died of cancer, and never got to see this victory.

Cunningham added that she had endured incredible suffering,

Judi died in 1997 from breast cancer. She had been horribly injured in the bombing. She was crippled, and she had a lot of pain. She kept right on doing her political work and got deeply involved in the case because she felt it was really important to fight back against the FBI attack on the environmental movement.

Michael James’ interview with James Cunningham will be excerpted in a book now under development by Charles H. Kerr Publishing Company.

Today it seems everybody is an “environmentalist” — but it doesn’t seem to mean anything except that they want a car with better mileage, and may have a recycle bin. That’s it, they fill up the world with more and more junk and the oceans with plastic bottles. Even capitalism has adopted “green” as the new thing since the financial and real estate crash, trying to exploit what minimal interest people have in preserving the planet.

The great tragedy of the Gulf Oil Spill has not yet been felt. The spill is still going on! Why aren’t BP officials being arrested and charged with reckless homicide? The ocean is being killed, so why aren’t the army, the navy, young unemployed kids, being mobilized to do some good for a change and try to clean this thing up. Oil, like water and air, should belong to the people, it should be used wisely, not wasted.

Such actions would honor the legacy of Judi Bari.

Here is more about the upcoming activities in the Bay Area:

[Penelope Rosemont is a writer, editor, publisher, radical activist, and surrealist artist. She is the author of Dreams and Everyday Life: André Breton, Surrealism, Rebel Worker, SDS and the Seven Cities of Cibola, and the editor of Surrealist Women : An International Anthology.] 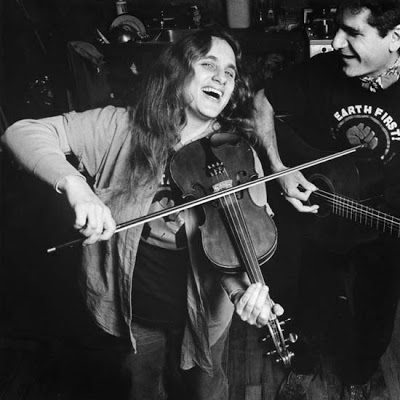