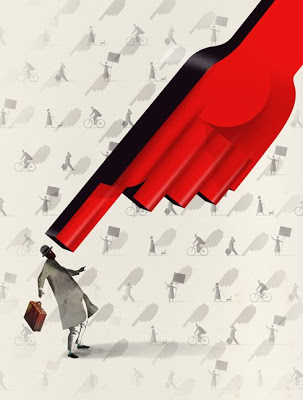 ARE YOU ON THE LIST? The federal government has been developing a highly classified plan that will override the Constitution in the event of a major terrorist attack. Illustration by Brett Ryder.
The Last Roundup: Is the government compiling a secret list of citizens to detain under martial law?
By Christopher Ketcham

In the spring of 2007, a retired senior official in the U.S. Justice Department sat before Congress and told a story so odd and ominous, it could have sprung from the pages of a pulp political thriller. It was about a principled bureaucrat struggling to protect his country from a highly classified program with sinister implications. Rife with high drama, it included a car chase through the streets of Washington, D.C., and a tense meeting at the White House, where the president’s henchmen made the bureaucrat so nervous that he demanded a neutral witness be present.

The bureaucrat was James Comey, John Ashcroft’s second-in-command at the Department of Justice during Bush’s first term. Comey had been a loyal political foot soldier of the Republican Party for many years. Yet in his testimony before the Senate Judiciary Committee, he described how he had grown increasingly uneasy reviewing the Bush administration’s various domestic surveillance and spying programs. Much of his testimony centered on an operation so clandestine he wasn’t allowed to name it or even describe what it did. He did say, however, that he and Ashcroft had discussed the program in March 2004, trying to decide whether it was legal under federal statutes. Shortly before the certification deadline, Ashcroft fell ill with pancreatitis, making Comey acting attorney general, and Comey opted not to certify the program. When he communicated his decision to the White House, Bush’s men told him, in so many words, to take his concerns and stuff them in an undisclosed location.

The Continuity of Governance program encompasses national emergency plans that would trigger the takeover of the country by extra-constitutional forces. In short, it’s a road map for martial lawComey refused to knuckle under, and the dispute came to a head on the cold night of March 10, 2004, hours before the program’s authorization was to expire. At the time, Ashcroft was in intensive care at George Washington Hospital following emergency surgery. Apparently, at the behest of President Bush himself, the White House tried, in Comey’s words, “to take advantage of a very sick man,” sending Chief of Staff Andrew Card and then–White House counsel Alberto Gonzales on a mission to Ashcroft’s sickroom to persuade the heavily doped attorney general to override his deputy. Apprised of their mission, Comey, accompanied by a full security detail, jumped in his car, raced through the streets of the capital, lights blazing, and “literally ran” up the hospital stairs to beat them there. 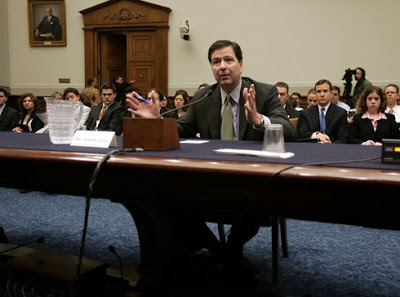 James Comey, credible witness
Minutes later, Gonzales and Card arrived with an envelope filled with the requisite forms. Ashcroft, even in his stupor, did not fall for their heavy-handed ploy. “I’m not the attorney general,” Ashcroft told Bush’s men. “There”—he pointed weakly to Comey—”is the attorney general.” Gonzales and Card were furious, departing without even acknowledging Comey’s presence in the room. The following day, the classified domestic spying program that Comey found so disturbing went forward at the demand of the White House — “without a signature from the Department of Justice attesting as to its legality,” he testified.

What was the mysterious program that had so alarmed Comey? Political blogs buzzed for weeks with speculation. Though Comey testified that the program was subsequently readjusted to satisfy his concerns, one can’t help wondering whether the unspecified alteration would satisfy constitutional experts, or even average citizens. Faced with push-back from his bosses at the White House, did he simply relent and accept a token concession? Two months after Comey’s testimony to Congress, the New York Times reported a tantalizing detail: The program that prompted him “to threaten resignation involved computer searches through massive electronic databases.” The larger mystery remained intact, however. “It is not known precisely why searching the databases, or data mining, raised such a furious legal debate,” the article conceded.

Another clue came from a rather unexpected source: President Bush himself. Addressing the nation from the Oval Office in 2005 after the first disclosures of the NSA’s warrantless electronic surveillance became public, Bush insisted that the spying program in question was reviewed “every 45 days” as part of planning to assess threats to “the continuity of our government.”

Few Americans—professional journalists included—know anything about so-called Continuity of Government (COG) programs, so it’s no surprise that the president’s passing reference received almost no attention. COG resides in a nebulous legal realm, encompassing national emergency plans that would trigger the takeover of the country by extra-constitutional forces—and effectively suspend the republic. In short, it’s a road map for martial law.

While Comey, who left the Department of Justice in 2005, has steadfastly refused to comment further on the matter, a number of former government employees and intelligence sources with independent knowledge of domestic surveillance operations claim the program that caused the flap between Comey and the White House was related to a database of Americans who might be considered potential threats in the event of a national emergency. Sources familiar with the program say that the government’s data gathering has been overzealous and probably conducted in violation of federal law and the protection from unreasonable search and seizure guaranteed by the Fourth Amendment.

According to a senior government official who served with high-level security clearances in five administrations, “There exists a database of Americans, who, often for the slightest and most trivial reason, are considered unfriendly, and who, in a time of panic, might be incarcerated. The database can identify and locate perceived ‘enemies of the state’ almost instantaneously.” He and other sources tell Radar that the database is sometimes referred to by the code name Main Core. One knowledgeable source claims that 8 million Americans are now listed in Main Core as potentially suspect. In the event of a national emergency, these people could be subject to everything from heightened surveillance and tracking to direct questioning and possibly even detention.

Read all of it here. / Radar Online

Thanks to Charlie Loving / The Rag Blog

This entry was posted in RagBlog and tagged Civil Liberties, Homeland Security. Bookmark the permalink.