Explanations That Do Not Mollify Anti-War Activists 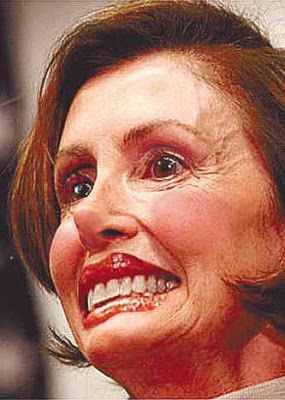 WASHINGTON — When House Speaker Nancy Pelosi set out to promote her new motivational book this month, she simultaneously touched off her national why-haven’t-you-impeached-the-president tour.

As she made the coast-to-coast rounds of lectures, television interviews and radio chats the past two weeks, Ms. Pelosi found herself under siege by people unhappy that she has not been motivated to try to throw President Bush out of office – even if only a few months remain before he leaves voluntarily.

In Manhattan and Los Angeles, at stops in between, on network television and on her home turf of Northern California, Ms. Pelosi has been forced to defend her pronouncement before the 2006 mid-term elections that impeachment over the administration’s push for war in Iraq was off the table.

Pressed on ABC’s “The View” about whether she had unilaterally disarmed, the author of “Know Your Power: A Message to America’s Daughters” said she believed the proceedings would be too divisive and be a distraction from advancing the policy agenda of the new Democratic majority.

Then she added this qualifier: “If somebody had a crime that the president had committed, that would be a different story.”

That assertion only threw fuel on the impeachment fire as advocates of removing Mr. Bush cited the 35 articles of impeachment compiled by Representative Dennis Kucinich, Democrat of Ohio, as well as accusations in a new book by author Ron Suskind of White House orders to falsify intelligence, an accusation that has been denied.

“There’s an opportunity now for us to come forward and to lay all the facts out so that she can reconsider her decision not to permit the Judiciary Committee to proceed with a full impeachment hearing,” Mr. Kucinich said in an interview with the Web site Democracy Now!

Mr. Kucinich, long a proponent of starting hearings to impeach both Mr. Bush and Vice President Dick Cheney, earlier this week applauded signals that the Judiciary Committee would look into the claims made by Mr. Suskind in his book.

While the Judiciary Committee might do exactly that, the chances that such an inquiry would culminate in an impeachment proceeding are, according to top Democratic officials, virtually nil.

At the moment, the House is officially scheduled to meet for less than three weeks in September before adjourning for the elections and perhaps the year – hardly enough time to mount an impeachment spectacle even if top Democratic lawmakers wanted one.

And they do not.

Despite whatever resonance pursuing the president might have in progressive Democratic circles, it is not the message Democrats want to carry into an election where they need to appeal to swing voters to increase their Congressional majorities and win the White House. They would rather devote their final weeks to pushing economic relief and health care, even if they thought Mr. Bush and the conduct of the war merited impeachment hearings.

And leading Democrats argue anyway that Mr. Bush has already been tried and convicted in the court of public opinion.

“He has been impeached by current history,” said Representative Rahm Emanuel of Illinois, chairman of the House Democratic Caucus. “He is going down as the worst president ever. The facts are in.”

Republicans have previously shown some appetite for luring Democrats into what they see as an impeachment trap, a set of hearings they could use to portray Democrats as bitter partisans. But Republican strategists also recognize the political danger in getting too deep in defending Mr. Bush right before the election or in justifying the buildup to the Iraq war. They might not be as eager as they once were for an impeachment fight.

Both parties know full well that the Republican push to impeach President Bill Clinton in 1998 did not work out for Republicans in the way they had hoped, giving many lawmakers pause when it comes to gaming out the political ups and downs of such an action.

The impeachment unrest among progressives dovetails with their profound disappointment that Democrats failed to cut off spending for the war in Iraq or impose a timetable for withdrawal after winning control of Congress in 2006. It is a disappointment that Ms. Pelosi has acknowledged she shares and one she attributes to the thin Democratic majority in the Senate and Republican determination to support Mr. Bush on the war, explanations that do not mollify staunch anti-war activists.

The disillusionment has crystallized in a challenger for Ms. Pelosi in the person of Cindy Sheehan, the anti-war activist whose son was killed in Iraq. Ms. Sheehan and her allies collected more than 17,000 signatures to qualify her as an independent for the November ballot in San Francisco.

While Ms. Pelosi has been navigating the impeachment issue on her book tour, House Republicans have been assailing her on the floor for refusing to allow a vote on lifting a ban on oil drilling along much of the nation’s coast. Democrats are back-tracking a bit on that stance, opening the door to a September vote on relaxing the restrictions on drilling as part of a broader energy bill that would also include Democratic initiatives to reduce subsidies for oil companies and encourage more use of natural gas.

These have not been easy weeks for Ms. Pelosi as she juggled promoting her book with defending her impeachment stance and fending off the Republicans. But party strategists say she’s in a strong enough political position to weather the attacks, while taking some of the political heat off more vulnerable Democrats. She might be under fire from the left and the right, but there is no talk of impeaching her.

This entry was posted in RagBlog and tagged Bush Impeachment, Nancy Pelosi. Bookmark the permalink.

1 Response to Explanations That Do Not Mollify Anti-War Activists