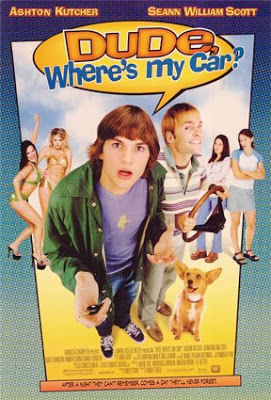 How Vietnam Gave us Dude, Where’s My Car
By Michael Bronski

One of the most amazing cultural responses to the war against Iraq has been the plethora of documentary and feature films produced by independent companies and even Hollywood studios. From In the Valley of Elah, Grace is Gone, and Stop-Loss to Redacted, Taxi to the Dark Side, and Standard Operating Procedure, this ongoing nightmare of a war is being discussed, analyzed, and attacked by filmmakers within a wide array of disciplines and political backgrounds

In the 1960 and 1970s the response to the Vietnam War was totally different. Sure there were some films that addressed it—Brian de Palma’s early independent Greetings (1968) and Emile de Antonio’s documentary In the Year of the Pig (1968), as well as a few other movies. Vietnam was obviously the inspiration for Robert Altman’s M*A*S*H (1970), and metaphorically for a few other films, but it was much later—a full decade—that we began getting mainstream films that dealt with the war in various ways: Deer Hunter (1978), Coming Home (1978), Apocalypse Now (1979). Years after that more films were made and released: Platoon (1986), Full Metal Jacket (1987), Hamburger Hill (1987), Good Morning, Vietnam (1987), and Born on the 4th of July (1989).

The more I thought about the quirks of popular culture and film culture, it seemed to me that Hollywood did have a very visceral response to the senseless slaughter of young Americans in Vietnam (though it didn’t really care to think about the millions of Vietnamese deaths or casualties). Beginning in 1978 with the release of Halloween and a slew of other slasher films, Hollywood was responding to the senseless slaughter of young American lives in its own peculiar way. Friday the 13th came out in 1980, A Nightmare on Elm Street in 1984. These quickly evolved into ongoing series that betrayed a national preoccupation with the deaths of young people. Along with these, a host of other films—Prom Night (1980), Terror Train (1980), My Bloody Valentine (1981), Happy Birthday to Me (1981), Slumber Party Massacre (1982)—drew huge audiences (and little critical approval) as the genre hit some nerve with viewers throughout the country.

Certainly the few Vietnam films that were released in the late 1980s could not be the only response to the national tragedy and crisis. But then it occurred to me that while Hollywood always liked a good war—although, apparently not in this case—what really moved it was the U.S. losing the war in Vietnam. This loss was a tremendous blow to the idea of American manhood. Clearly, this manhood had to be psychically restored in mass consumer culture. And made to order came butch, strong men who let nothing stand in their way of success.

First there was Rocky (1976) in which Sly Stallone turned the boxing ring into a war. As the series caught on to his real meaning he was pitted against Russian thugs to make sure that we won the Cold War. Arnold S. did Rocky one better as an indescribable cyborg in Terminator (1984). He continued with Commando in 1985, Raw Deal in 1986, and Running Man and Predator in 1987. All of these had post-Vietnam and Cold War contexts and guess what—Arnold won everything. At the end of this cycle came Bruce Willis in Die Hard (1988).

The subtext of these films was the reassertion of a masculinity so extreme, so powerful, so conclusive that it was super-human. Massive and casual death was the narrative of these films—and the disposibility of other bodies was the drive. They all did that with a grave disregard for morality or honesty.

After so much straining and huffing and puffing these unholy three petered out and the genre passed into film history (the actors, unfortunately, did not). America was tired, apparently, of proving that it could have won in Vietnam and moved on to what seemed to be a completely antithetical genre: the stoner buddy movie. These films are an outright rejection of the Stallone/ Schwarzenegger/Willis mythos. They featured teenaged boys; they did not promote violence, but a charmingly pot-riddled sense of make love, not war. They were wedded to a view that was both naively innocent and anti-rational. They insisted on being as non-traditionally masculine as possible. America’s romance with the brute had been replaced with a new love affair: the clever, innocent, but haplessly wrecked teen boy. It was an improvement.

Bill & Ted’s Excellent Adventure in 1989 gave way to Bill & Ted’s Bogus Journey in 1991, and then Dazed and Confused in 1993. The one salient theme was the refusal to take anything seriously. In what seemed to be a rebuke to the death-obsessed antics of the unholy three, these guys didn’t even take death seriously. As slight and silly as it was, it was preferable to killing machines.

By the time we get to Dude Where’s My Car in 2000, the guys are straight—they remember they have girlfriends when they are able to, often they are just too wasted to think about it—but they have no problem acting like they are a couple. It’s true that in Harold and Kumar Go to White Castle (2004)—a demented son of Dude, Where’s My Car—they are more actively interested in women, but they are still fleeing any sort of traditional masculinity. Their refusal to think about the realities of world politics in any conscious way makes these films profoundly apolitical.

It may be too much to expect stoner films to deal with political realities—they exist precisely to deal with them by ignoring them—but the fact is that, unlike the 1960s and 1970s when films avoided the harsh, ugly realities of war, we are blessed today with films that deal with most aspects of our current political crisis.

And we have some fun stoner comedies as well that aptly and neatly critique the very notions of masculinity that have brought us into, and continue, this mess.

[Michael Bronski is the author of numerous articles and books including Pulp Friction: Uncovering the Gold- en Age of Gay Male Pulps. He has been a visiting professor in Women’s and Gender Studies and Jewish Studies at Dartmouth College since 1999.]