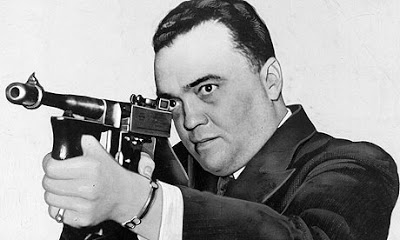 Eastwood presents Hoover as a crusader who protected the nation against the bomb throwers of the 1920s… What J. Edgar doesn’t show is how out-of-control Hoover and his band of thugs really were.

By calling his new biopic about the long-time director of the FBI, J. Edgar, rather than Hoover, or even J. Edgar Hoover, Clint Eastwood announces from the start that his picture will offer a personal look at the man behind the badge and the newspaper headlines. The audience is invited to be on a first-name basis with the hero or anti-hero of the film, as the case may be.

Indeed, Eastwood provides plenty of behind-the-scenes images of J. Edgar Hoover, as the world knew him for decades, and as I have always thought of him.

Eastwood shows Hoover with his long-time companion and devoted friend, Clyde Tolson, as well as with his over-protective mother. He shows Hoover alone before a mirror after his mother’s death trying on her clothes and jewelry. And there’s a very brief scene in which he stutters. All of these glimpses into the private life of the head of the FBI surely would have been regarded as libelous and as invasions of privacy during Hoover’s lifetime. (He died in 1972 at the age of 77.)

Moreover, he surely would have made life extremely difficult if not downright miserable for any movie director or book author who denigrated his image as a gang-buster and super-patriot in much the same way that he made life difficult for communists, anarchists, liberals, and “pinkos,” as anyone left of center was called during the Red Scare which lasted from about 1917 and the outbreak of the Russian Revolution to the fall of the Soviet Union and Russian communism in 1989.

Hoover held sway for much of that time, serving under Herbert Hoover, FDR, Truman, Eisenhower, JFK, LBJ, and Nixon, which suggests that beneath their differences, American presidents whether Republican or Democrat shared a fear, hatred, and also a basic ignorance of communists, communism and the Soviet Union. The FBI — America’s secret police — operated for most of the twentieth century under Hoover’s thumb and without much oversight and public scrutiny. What J. Edgar doesn’t show is how out-of-control Hoover and his band of thugs really were.

I first learned about Hoover and about his FBI in the late 1940s when I was a boy and when Truman was President. I learned more about him as I grew up and began to protest segregation and the testing of nuclear weapons and at the same time urged integration and peace.

Early on, I was intimidated by the name J. Edgar Hoover itself and by the image of him and the FBI. My parents — who had been Communist Party members for much of the 1930s and 1940s — told me never to talk to an agent, and I never did. I never thought of the FBI as a protective force but as a menace — akin to Big Brother in George Orwell’s 1949 novel 1984 — who watched everyone constantly and created a police state.

It wasn’t until the 1970s, with help from the Freedom of Information Act, that I learned that the FBI had started to monitor my own political activity in 1962 when I, along with classmates at Columbia College, called for the abolition of the House Committee on Un-American Activities (HUAC), which worked in tandem with Hoover. I learned, too, that the agency continued to monitor me all through the 1960s and 1970s, with a little help on occasion from the CIA, especially when I went to Algeria to meet with Eldridge Cleaver of the Black Panther Party and Timothy Leary, the apostle of LSD.

By 1968 or 1969, I — and a whole generation — ceased for the most part to be fearful of Hoover. I even began to issue my own Yippie “Wanted Posters,” including one for Richard Nixon, whom I described as a “war criminal,” a poster that Abbie Hoffman reprinted in Steal This Book.

In the 1990s, while conducting research on Hoffman at FBI headquarters in Washington, D.C., I had to walk in front of a statue of Hoover every day, and I found it ironical that he was still keeping an eye on me. Of course, a flesh-and-blood FBI agent sat alongside of me in the library and watched as I turned some 17,000 pages of text about Abbie.

That was characteristic of the agency — that it watched and maintained surveillance of citizens even when they posed no real threat to the government, the state, or its institutions. At FBI Headquarters in Washington, D.C., I sat next to Taylor Branch, the historian and biographer of Dr. Martin Luther King, Jr., whose bedroom trysts were monitored by the FBI. Those scenes appear briefly in Eastwood’s movie and suggest that the director was a voyeur and kinky.

J. Edgar does not present the FBI director as a saint; it shows him as a human with incredible strength of character and with a profound need for love and admiration. Eastwood’s Hoover is a “mother’s boy” unable to have a mature sexual or romantic relationship with an adult man or woman, though he did inspire great loyalty in both men and women. 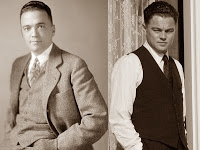 Naomi Watts, who played the role of the beautiful blond in the remake of King Kong, plays the role of Helen Gandy, Hoover’s real life private secretary who shreds his secret files after his death, rather than allow them to fall into the hands of Richard Nixon, the only character in the film who uses real obscenities and who serves as Eastwood’s arch villain.

By comparison with Richard Nixon, Eastwood’s J. Edgar is a loving beast and a misunderstood king with noble intentions and a clean mouth. If he maintains files on presidents and on ordinary citizens, it’s for a good cause. He wants to protect America — American freedom, democracy and happiness — from internal and external enemies.

Some of those enemies were indeed real, though real enemies such as the Nazis and KKK members didn’t seem to trouble Hoover. A great many others were figments of his own vivid imagination, though he hounded them nonetheless, persecuted them, and ensured that they were prosecuted, jailed, and deported.

These included Emma Goldman, the Russian-born anarchist who appears early in the film wearing granny glasses just before she’s booted out of the country. Goldman the feminist, environmentalist, defender of the working class, and the rights of women just doesn’t appear at all in J. Edgar. For Eastwood, she’s a dangerous anarchist who deserved to be deported.

In Eastwood’s eyes, Hoover really did love his country and sought to defend it, and, while he also shows that Hoover falsified his role in fighting crime and criminals, he does not show how he falsified, distorted, and, lied about the role of anarchists, communists, union organizers, civil rights activists, peaceniks, and artists and musicians who happened to smoke marijuana and didn’t conform to middle class values and conventions.

In the 1950s, Hoover said that the Beats and the Beatniks were as big a threat to America as communism itself. Using all the resources of the Counter Intelligence Program (COINTELPRO), which was formed in the 1950s and that lasted well into the 1970s, the FBI actively aimed to destroy legitimate political organizations that opposed the war in Vietnam and advocated social and political justice. At the same time, Hoover and the FBI failed to combat the Mafia and “organized crime.” In fact, for decades Hoover insisted that organized crime wasn’t his concern.

During the Red Scare of the 1950s, Hoover and his agency ruined the lives of hundreds of thousands and perhaps millions of ordinary citizens, much as the KGB ruined the lives of Soviet citizens during the Stalin era. Eastwood doesn’t see the similarities between their secret police and ours. He presents the FBI director as a crusader who protected the nation against the bomb throwers and the terrorists of the 1920s, and in so doing he makes Hoover into a hero for today’s war against terrorists and terrorism, and as an honorable predecessor to the authors of the Patriot Act.

Leonardo DiCaprio plays Hoover as a man tightly wound, with repressed sexual desires, and little if any overt ideology. Much of the time, he seems to be trying to look and act like Orson Wells in Citizen Kane. At times, it appears as though Eastwood meant his movie to be a kind of “Citizen Hoover.” DiCaprio spends a lot of time on screen in elegant suits, talking to reporters, and to members of Congress.

The single case that’s dissected in the movie is the kidnapping of Charles Lindberg’s baby, which allows Eastwood to make J. Edgar into a likeable cop rather than a monomaniacal anti-communist. Indeed, the film whitewashes Hoover’s war on communism and communists and that’s whitewashing a huge chapter in twentieth-century American history.

George Orwell, who noted that “all art is propaganda,” but that “not all propaganda is art,” might call Eastwood’s J. Edgar “artful propaganda.” Orson Wells just might find it all too comical. Kinky Hoover doesn’t seem destined to join the cavalcade of immortal Hollywood movie images.

[Jonah Raskin is a professor at Sonoma State University and the author of For the Hell of It: The Life and Times of Abbie Hoffman and American Scream: Allen Ginsberg’s Howl and the Making of the Beat Generation. Read more articles by Jonah Raskin on The Rag Blog.]