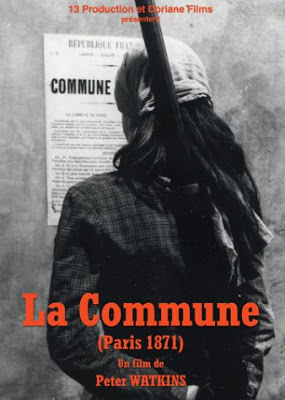 The Paris Commune, that is — a citizens’ revolt against a royalist government, the organizing of that revolt, and the crushing of it by government forces, all in the course of three spring months in 1871.

After staring at a screen for 345 minutes, my wife and I — completely revved — looked at one another, and both asked the same question: “Are we doing enough?” What an outcome from seeing a film we expected to tax our endurance.

Peter Watkins’ La Commune (Paris 1871) is unlike any other political film I’ve seen. I’ve previously been appalled by suffering depicted, awed at Davids fighting huge Goliaths, frustrated, and angered, and stressed. But never before have I felt so personally challenged to think acutely through my beliefs, to measure my own action against my ideology.

Watkins achieves this effect via an astonishing conceptual move which greatly expands the potential for the art of political film. Assembling a group of 200 non-professional actors, he asked them to research their roles in the great insurrection, and to so understand the history of their characters as to be able to speak for them in interviews, in modern language, perhaps, but accurately, and with passion.

His players thus had to grapple with six different personae, three personal and three collective:

In the course of making the film, these 200 people had to build their own commune, to establish decision-making groups around their work, and the agenda of the project itself.

What we see is startlingly unrealistic. We are shown around the “studio” by a pair of commentators from “Commune TV,” dressed, as is everyone, in nineteenth century garb, but utilizing hand-held mikes for their reporting.

Written commentary flows throughout the film, describing historical events in great detail; the viewer comes out well instructed as to actual history, sometimes with modern comparisons. In general, the rhythm proceeds from these historical introductions to the scenes described, action and interviews, with frequent cuts to contrasting reports from effete anchors on National TV.

Thus, La Commune is also about the media: some news for communards, different news for the haute bourgeoisie. Commune TV itself is also critiqued, with one reporter wanting to self-censor to better serve the struggle, and the other arguing for objectivity.

In the course of scenes and interviews, we experience the difficulty of creating a just society in the midst of competing world views, strategies at odds, and varying levels of commitment — and the threat of external force. At the same time, we come to understand the individual struggles which must occur at such potentially world-changing moments.

Beyond the designated enemy, who else is the enemy? Does a revolution require a guillotine?

Once the social/historical background is laid, the radical nature of the project emerges with increasing intensity, as Commune reporters start to intercut their interviews with different kinds of questions: Not What are you, the character, thinking?, but what are YOU, the actor, thinking about what’s going on? What IS going on — not for the character you are playing, but for YOU? Would YOU do today what your character did in history?

Such questioning begins gently, so that the actors can be reflective about their answers, but finally it intrudes, overwhelms, fiercely, passionately, right at the peak of the barricades. In the feverish pitch of their historical action, almost hysterical actors are badgered, mercilessly, about their personal reality.

The film emerges as a theater of cruelty, as these amateurs try to access such schizophrenia in the midst of their characters’ life and death struggles. The level of emotional and intellectual intensity is unmatched, especially compared to the smoothness of normal, professional productions.

And it is here — in this harassment — that the film becomes uniquely interactive. For viewers, rather than settling into the problems of the characters portrayed, are caught up in the inquisitorial demands of the interviewer, and absolutely MUST ask themselves the kinds of questions my wife and I were forced to face. Paradoxically, it is via such a non-realistic theatrical contrivance that Watkins achieves total breakdown of aesthetic distance.

During the final third of the film the momentum becomes so great and potentially exhausting that the audience is given occasional breaks as the cast comes together to discuss the actual making of the film, the contemporary and personal politics (especially sexual) that got swept under the rug, or hidden behind the historical story.

Yet, though the tempo goes from allegro agitato to andante, one’s interest is further intensified by meeting the individuals involved, and comparing their experiences with one’s own.

For theater and film folks, La Commune is an outstanding primer of Brechtian technique, with a compositional strategy reminiscent of the Living Theater’s Paradise Now, or Peter Brook’s Marat/Sade. The emergence of Artaudian effects from Brechtian theory is nowhere better seen.

Yet the prime importance of this work is as an organizing tool. If political action in your community is plagued by low energy or lack of commitment, a viewing of La Commune should solve that type of problem, for no one can leave it at the same ethical or intellectual energy level as before. The political difficulties depicted are daunting; some might find them depressing. Yet witnessing them so clearly can warn us of our own, contemporary, traps.

This is a film of first rate importance for current political struggle.

Find La Commune in a three-disc set from Amazon.com.