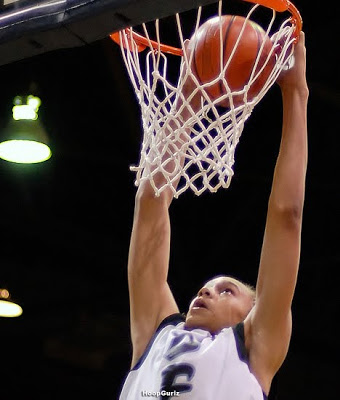 A 6’ 8” freshman is changing the way we understand hoops in the 2010 NCAA tournament and unless you’re paying full attention to all the glories of March Madness, you’d never know it.

Maybe it’s because the player in question is not a fresh-MAN at all. Her name is Brittney Griner, and despite the incredible buzzer beaters and upsets in the men’s draw, she is the individual story of this year’s “Big Dance.” Griner, with her agility, quick hops, and size 17 men’s shoes, is more than just evolution in action. That would imply that there are more Brittney Griner’s in the high school pipeline. There aren’t. She is simply a player apart.

As Helen Wheelock of the Women’s Hoops Blog commented to me, “My sense is that she’s unique — not because of her skills, but because of her mere physical size/attributes — and that her play will draw those who are curious in to be part of the viewing audience.”

If you aren’t aware of Griner, please allow me to stoke your curiosity. Her initial year of college ball has exceeded expectations with statistics that rival the first-year seasons of Lisa Leslie and Anne Donovan. But that has proven to be just an appetizer. Her tournament has been simply epic, with the only available comparison being Bill Russell.

First she set an NCAA tourney record with 14 blocked shots against Georgetown. Then against legendary Coach Pat Summit and the Tennessee Lady Vols, Griner played all 40 minutes and finished with 27 points, 10 blocked shots and seven rebounds, all while barely breaking a sweat. Baylor won 77-62 in what was basically a road game, played in Memphis. Now Griner is the first player to ever have at least 10 blocked shots in two separate tournament games.

There have been tall players in women’s hoops before. What separates Griner is that her height is matched by an agility, footwork and toughness that sees her contesting shots from the rim to the three point line. As her teammate, 5’ 10” guard Melissa Jones said, “It’s my excuse. When someone drives past me, I say I wanted Brittney to get 14 blocks. I’ll take credit for that.”

Before the tournament, Griner was best known for two things women players normally do not do, one notable and the other notorious: first she dunked twice in one game, a spectacle that put women’s hoops higher in the highlight rotation. Then last month, during a physical, bruising contest against Texas Tech, she punched opposing player Jordan Barncastle, bloodying her face, and was suspended for two games.

Now both the notable and notorious are in the rearview mirror. Baylor will be playing the school-that-will-not-be-named on Monday (ok, it’s Duke) to see who makes the Final Four. The winner will presumably play the utterly unbeaten and unchallenged 36-0 UCONN Huskies who haven’t lost seemingly since the Carter Administration. UCONN is epic, and we do love our sports dynasties in this country. But, like Wilt Chamberlain in his prime, are they just too good?

I communicated with USA Today’s Christine Brennan who told me,

Brittney Griner is the best thing to happen to women’s basketball since UConn, and she might be even better for the game than UConn. Connecticut’s dominance can cut both ways for women’s hoops. It’s stunning, but all those double-digit wins can depress national interest. But Griner? People will tune in to see this kid, and she’s only going to get better. It’s a cult-of-personality world out there in sports, and she’s the new, fresh face of women’s sports — not just basketball, but all women’s sports.”

If Griner and her Baylor Lady Bears teammates are the only thing standing between UCONN and another title, anyone who considers themselves a hoops fan should tune in. It will be David against Goliath. But this time, David will be 6”8”, and brilliant to behold.

[Dave Zirin is the author of the forthcoming Bad Sports: How Owners are Ruining the Games we Love (Scribner) Receive his column every week by emailing dave@edgeofsports.com. Contact him at edgeofsports@gmail.com .] 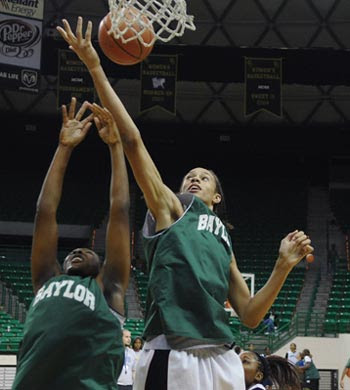 Brittney Griner. Photo from The End Zone.
The Rag Blog