From Garbage to Gas Tank: Trash as Biofuel 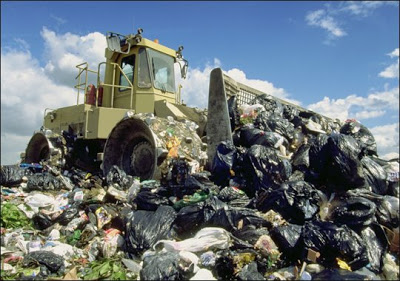 Within the next two years, some of us may be running our cars on trash.

Two companies — INEOS bio of Lyndhurst, U.K., and Coskata of Warrenville, Ill. — claim to be within reach of producing ethanol from garbage on a commercial scale.

INEOS bio announced this week that they plan to produce commercial quantities of waste-derived ethanol within two years. Coskata plans to have a commercial demonstration facility by mid-2009.

The companies use similar processes to turn municipal waste into ethanol. The first step is gasification, in which the waste is heated with limited oxygen to create carbon monoxide and hydrogen.

“It’s a very different process from incineration, where you completely combust in excess air,” which results in carbon dioxide and water, said INEOS bio’s Graham Rice. “We’re trying to go halfway and produce carbon monoxide, which still has a lot of chemical energy.”

The carbon monoxide and hydrogen mixture is then fed to bacteria, which convert the mixture into ethanol. The ethanol is then purified and blended with fuel.

Importantly, none of these starting materials is used for food, so this process sidesteps concerns over diverting food crops like corn into biofuel production.

“The analysis we’ve done is that the greenhouse gas emissions we’d expect would be a 90 percent reduction compared to petrol [gasoline],” Rice added.

“We’re looking at one dollar a gallon production cost,” Bolsen said, “which competes directly with [the cost of ethanol from] Brazilian sugarcane, and we can do it here in the U.S.”

“Wherever there are people, wastes are generated,” Rice said. “What I’d like to see is every community converting its waste into renewable transport fuel.”

This entry was posted in RagBlog and tagged Alternative Energy, Biofuel, Sustainability. Bookmark the permalink.

2 Responses to From Garbage to Gas Tank: Trash as Biofuel