Haiti : Anger and Courage in the Ruins 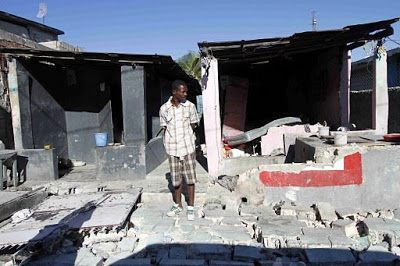 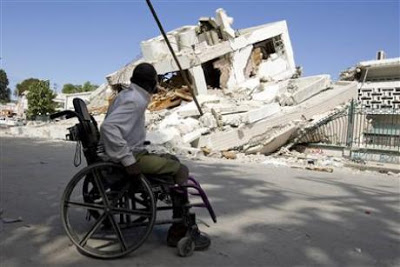 Haiti: Surveying the damage. Photos from AFP (top) and Reuters.
As aid efforts flounder,
Haitians rely on each other

PORT-AU-PRINCE — The roof of Haiti’s national penitentiary is missing. The four walls of the prison rise up and break off, leaving only the empty sky overhead.

The gate to the jail in downtown Port-Au-Prince is wide open; the prisoners and police are all gone. Bystanders walk freely in and out, stepping over the still-hot smoldering remains of the facility’s ceiling.

The 7.0 magnitude earthquake on Tuesday afternoon broke it to pieces.

“I don’t know if he’s alive or not alive,” said Margaret Barnett, whose son was a prisoner. “My house is crushed down. I’m just out in the street looking for family members.”

In the absence of any visible relief effort in the city, the help came from small groups of Haitians working together. Citizens turned into aid workers and rescuers. Lone doctors roamed the streets, offering assistance.

The Red Cross estimates that 45,000 to 50,000 people were killed in Tuesday’s earthquake, with some three million others left homeless and in need of food and water.

At the crumbling national cathedral, a dozen men and women crowded around a man swinging a pickax to pry open the space for a dusty, near-dead looking woman to squeeze through and escape.

The night of the quake, a group of friends pulled bricks out from under a collapsed home, clearing a narrow zig-zagging path towards the sound of a child crying out beneath the rubble.

Two buildings over, Joseph Matherenne cried as he directed the faint light of his cell phone’s screen over the bloody corpse of his 23-year-old brother. His body was draped over the rubble of the office where he worked as a video technician. Unlike most of the bodies in the street, there was no blanket to cover his face.

Central Port-Au-Prince resembles a war zone. Some buildings are standing, unharmed. Those that were damaged tended to collapse completely, spilling into the street on top of cars and telephone poles.

In the day following the quake, there was no widespread violence. Guns, knives and theft weren’t seen on the streets, lined only with family after family carrying their belongings. They voiced their anger and frustration with sad songs that echoed throughout the night, not their fists.

“Only in the movies have I seen this,” said 33-year-old Jacques Nicholas, who jumped over a wall as the house where he was playing dominoes tumbled. “When Americans send missiles to Iraq, that’s what I see. When Israel do that to Gaza, that’s what I see here.”

Late at night, Nicholas heard false rumors that a tsunami was coming and he joined a torrent of people walking away from the water.

Nobody knows what to expect. Some people said Haiti needs a strong international intervention — a coordinated aid effort from all the big countries. But there was no evidence on the streets of any immediate cavalry of rescue workers from the United States and other nations.

“My situation is not that bad,” said Nicholas, “but overall the other people’s situation is worse than mine. So it affects me. Everybody wants to help out, but we can’t do nothing.”

Haitians are doing only what they can. Helping each other with their hands and the few tools they can find, they lack the resources to coordinate a multi-faceted reconstruction effort.

U.N. agencies and humanitarian organizations on the ground are struggling to help survivors of the quake, but many are hindered by large-scale damage to their own facilities, as well as lack of heavy equipment to clear rubble.

Logistics remained the main obstacle on Friday, according to news reports, with damage to the main airport, impassable roads and problems at the docks continuing to bottleneck the outpouring of international relief workers and basic supplies.

The United Nations is issuing a flash appeal Friday for more aid as part of a coordinated immediate response and long-term reconstruction plan.

A popular radio host here reminded everyone that the strength of the Haitian people cannot be underestimated, posting on his Twitter: “We can re-build! We overcame greater challenges in 1804” — the year Haiti threw off the yoke of colonial slavery in a mass revolt.

As the days tick by and the bodies pile up, it will take bold vision and hard work on that scale for Haiti to recover from Tuesday’s tremors.