Posted on September 9, 2010 by Thorne Dreyer 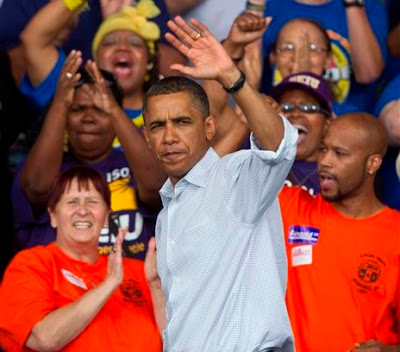 Obama’s Labor Day speech in Milwaukee: start of something new? Photo by Morry Gash / AP.
The working class built this country:
Now we must mobilize to transform it

From Labor Day to election day

I want to add my voice to the thousands of essayists and bloggers who have been contemplating the 2010 elections, the media “framing” of Tea Party influence, the role of progressives in the elections, and mobilizing for the last 50-plus days before the elections.

First, I think elections still matter. Since most people see politics and elections as equivalent and some of them actively participate in the electoral process, progressives need to be there as well.

In addition, in states and communities decisions will be made about how federal government money for local school corporations is to be allocated, about workers compensation for victims of asbestos related workplace injuries, so-called Right to Work laws, and how congressional and state legislative districts will be redesigned.

At the national level, policy decisions about such critical issues as jobs, climate change, education, military spending, and judicial appointments will be affected by election outcomes.

Second, most of these issues have not been the main narrative. The media have framed the fall elections around the big losses of Democrats, the rise of the Tea Party, and how the Obama administration has not fixed eight years of economic mismanagement and war (let alone 30 years of ill-conceived policies).

Third the “liberal” media, while more sophisticated and entertaining in its coverage of election year stories, over-emphasizes “making fun” of some of the outlandish Tea Party candidates for public office. And they, and their right wing media colleagues at Fox, have made the obscure former governor of Alaska a million dollar media star.

In response, Tea Party candidates, and their corporate sponsors, have decided to do two things: forget about trying to put together logical, coherent plans for an alternative set of policies and when challenged by enterprising reporters just walk away. Since the media they tell us is the enemy and most people are fearful of public speaking, incoherence and evasiveness will resonate well with a disillusioned public.

Fourth, part of the context for the unstable politics of the fall, 2010, is the continued economic crisis that grips working people. Unemployment, declining real wages, indebtedness, crumbling public services remains all too real for the majority of Americans.

In addition, until the President’s exciting Labor Day speech in Milwaukee, the Obama administration has failed to propose an economic stimulus program that could bring millions of un- and underemployed workers back to work and, until Labor Day, backed off his commitment to a massive program for creating green jobs.

For reasons of political exigency, he has postponed advocacy for immigration reform, climate change legislation, the Employee Free Choice Act, and an end to the blockade of Cuba. Perhaps most troubling for the long run, Obama appointed to positions of power many of the neoliberal financiers who were responsible for the current phase of capitalist crisis.

Having said all this, the administration has forestalled return to depression with a modest economic recovery program, created some public sector jobs, “saved” the U.S. auto industry, and has secured the passage of an inadequate health care reform bill but one which may stimulate more movement toward a single payer system in the future.

A high level of distrust of government, low regard for politicians, and periodic active anger at our public institutions is a characteristic feature of American history often reflected in voting against political incumbents and supporting candidates who are most vocal against government programs. 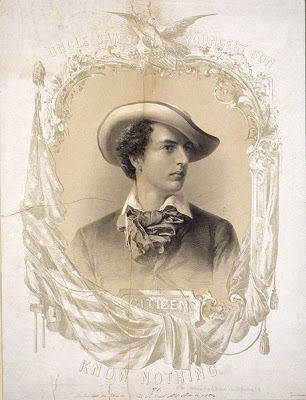 The Tea Party is nothing new. Here’s “Citizen Know Nothing,” the nativist ideal of the American Party (aka the Know Nothing Party), 1854. American political prints 1766-1876 / Library of Congress / Wikimedia Commons.
In addition, a constant feature of political life has been active and extremist politics. For example, the American Party of the 1850s, or “Know Nothing Party,” got its name from members being instructed when asked about the party to say “I know nothing.” While short-lived they elected several national and state office holders before the civil war.

Throughout U.S. history so-called “nativist” groups formed and mobilized against waves of immigrants: Catholics, Germans, the Irish, Chinese, Jews, and Latinos. Armed Klan organizations terrorized the South and the Midwest in the 1880s and 1920s and 1930s and dominated the political life in many states in these eras.

Of course, extremist movements, often organized and funded by corporations and wealthy individuals, scared the American people during the dark days of anti-Communism in the 1940s and 1950s. Red Channels, a small but well-funded political organization, published lists of suspected Communists in the entertainment industry and pressured the new television corporations and advertisers to purge actors and actresses, with views supportive of labor, racial integration, and peace, from the airwaves. Their activism paralleled and reinforced Congressional reactionaries who used investigative committees to hound individuals and groups.

Alternatively, for all of Labor’s flaws, the history of the American labor movement has been central to social progress in the United States: from the demands for an eight hour day, skilled trades controls of the pace of work, health and safety at the work place, a fair wage, programs of health and retirement benefits, and, after much internal conflict, support for the struggles against racism and sexism.

There is no question that organized labor, although weakened and embattled, represents the most powerful force in today’s society resisting the privatization of social security, deregulation of the economy and environment, and the total marginalization of working people everywhere.

So what to do now? History and context suggests that given the importance of elections, the enormous distrust of government, the existence of media and corporate capital support for the historic undercurrents of anti-government and anti-worker political traditions, often coupled with racism and fear of foreigners, progressives have only one choice for the next two months: work to elect political candidates from the city council to the Congress of the United States who support a “working people’s agenda.”

American political history tells us that movements like the Tea Party are not new. While the concern and anger reflected among those grassroots activists who participate in rallies and marches is usually sincere and motivated by fear of strange times and economic crises with no seeming resolution, its leaders offer no program, no vision, and no coherent agenda.

If Tea Party spokespersons and candidates are queried about their goals, they evade or refuse to respond. Some of their television heroes draw lines and circles and arrows on blackboards to illustrate the connections between people living down the street, working in a union job, teaching at a college, running for office, and the Russian Revolution of 1917.

No, progressives cannot argue with the Tea Party movement. But, what we must do is to campaign, not just for individual candidates or just for a party but for a “working people’s agenda.” That constitutes the only future for the vast majority of Americans. This agenda must include a fight for full employment.

As the AFL-CIO put it in 2009 action must be taken to extend unemployment benefits; rebuild America’s schools, roads, and energy systems; expand support for the maintenance of state and local public services; put all people who want to work on jobs that need to be done; and regulate banks more effectively so that they are required to support local projects that create businesses which will create jobs.

Laura Jackson, a member of the Communications Workers of America (CWA) noted recently: “We definitely need to make sure that the people making the decisions make jobs their top priority. I’m going to do all I can to make sure that happens including getting the message out to my family, union members, and anyone who will listen.”

Therefore, progressives, both in the labor movement and supportive of it, must welcome and support the new AFL-CIO campaign to mobilize voters in 26 states and 400 races to support candidates who endorse a working peoples’ agenda. This includes making sure that the “new Obama” proposals reflected in the President’s speech of September 6, 2010, carrying the message of green jobs and justice, become part of the agenda of every candidate we support this fall.

Also progressives must spread the word about the historic mobilization October 2 for “One Nation Working Together” organized by the AFL-CIO, the National Association of Colored People (NAACP), and the National Council of La Raza (NCLR). Already many peace and justice groups such as United For Peace and Justice (UFPJ) and the Committees of Correspondence for Democracy and Socialism (CCDS) have signed on as supporters.

Most important, progressives must work in their communities and in solidarity with workers, people of color, and youth to elect progressive candidates to public office and to monitor their conduct once they are elected. It must be made clear to all that the progressive majority is not engaged in politics to support candidates or parties but to transform America.

2 Responses to Harry Targ : From Labor Day to Election Day