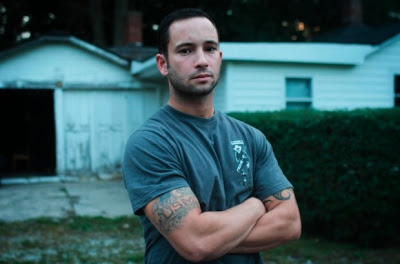 “I grew up in Chicago and Northwest Indiana. Working-class family, father was a Union Ironworker… mother was a stay at home Mom.” Vince Emanuele joined the Marines after graduating from high school. “I came out of boot camp a hard chargin’ Devil Dog.”

He served in the Marines from 2003 until 2005 stationed in California, Kuwait, and Iraq. His eight month deployment in Iraq involved him in street patrols, looking for snipers and land mines, “along with shooting at innocent civilians, destroying their property and beating up prisoners.”

While in Iraq the fascination with war that he had acquired as a kid playing video games dissipated. His father sent him reading material — Noam Chomsky, Gore Vidal, Hunter Thompson, The Nation — and he and friends began to reflect on what they were doing in Iraq. He came to the view that the war was “illegal, immoral, unjustified, and unneeded.” He was not spreading “democracy” or “peace” and the U.S. war effort was not winning the “hearts and minds” of the Iraqi people.

After returning to the U.S., Emanuele joined Iraq Veterans Against the War, has been organizing vets in Indiana and Illinois, created a weekly radio show called “Veterans Unplugged” which is available online, and has become a prominent activist for social, economic, and political justice in the heartland of America while finishing an undergraduate political science degree.

Emanuele recently spoke on a panel organized by the Lafayette Area Peace Coalition. He elaborated on the current plight of veterans, particularly veterans who served in the two longest wars in U.S. history, Afghanistan and Iraq.

While acknowledging that the current military force has chosen to enlist in regular army or reserve units, the 21st century enticement to serve is really an “economic draft.” With declining incomes, wages, job opportunities, and rising educational costs, more and more men and women, he said, have seen military service as the only escape from lives of economic marginalization.

He spoke of the culture of militarization to which every new recruit is exposed: a process of dehumanization; the spread of racism, particularly targeting stereotypes of Muslims; sexism; and homophobia. In reality the military experience of young people, Emanuele said, involves placing raw, uneducated, teenagers in a war zone, with weapons and a license to kill. The victims of the actions of these raw recruits, schooled in video games and super-patriotism, were the millions of Iraqi and Afghan citizens who most fervently wanted the young foreigners off their land.

Emanuele presented some figures on the impacts of military service on returning veterans. (According to the Bureau of Labor Statistics in 2010 there were 20.2 million men and 1.8 million women who had served in the military). In 2011, Emanuele reported:

Emanuele, connected the plight of returning veterans to the military-industrial complex and imperial wars. As a member of Iraq Veterans Against the War, he highlighted the long tradition of soldiers resisting participation in unjust wars. He referred to patterns of resistance to war running throughout U.S. history:

Emanuele stressed the commonality of experience and vision that is shared by most veterans with the Occupy Movement. He suggested that peace and justice activists must understand that returning veterans are a vital part of the 99% movement committed to radically restructure American society.

He argued that the 99%, including vets, must see the vital connections between the global capitalist system, the military-industrial complex, and the pain and suffering that have generated war and economic insecurity in the 21st century.

Emanuele ended his talk with reference to the frank admission of General Smedley Butler who oversaw the effort to crush the army of Augusto Sandino in Nicaragua in the early 1930s. Butler admitted that he, as a Marine General, had served as an instrumentality of Wall Street, putting down popular rebellions in the service of profit.

1 Response to Harry Targ : Vince Emanuele, Anti-War Vets, and the 99%