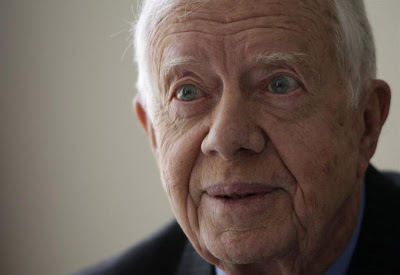 One would hope, now that President Carter has cleared the air, that Obama will set aside his effort to please those who cannot be pleased, and concentrate his energies on fulfilling his promises to the American people…

The statement by President Jimmy Carter on September 14 regarding the latent, and frequently overt, racial hostility to President Obama by the present day purveyors of eugenics, came as a breath of fresh air.

I, as many others, watched in dismay the demonstrations of Saturday the 13th in our nation’s capital. I shuddered as I saw a simulation of events in Nuremberg, Germany on September 4, 1934 — as thousands of the unthinking (and proud of it) and uninformed paid tribute to the purveyors of bigotry and misinformation disguised as patriotism and nationalism.

The mobilization of these robots by FreedomWorks, Tea Party Patriots, and ResistNet makes one think of the sponsors and organizers of the 1934 rally, which was also predicated upon a subtle stoking of fear — fear of the Slavs, the Jews and the intellectual liberals. In my subconscious I heard the words of Pastor Martin Niemoller:

Perhaps in my dotage I tend to be a bit overly dramatic; however, in the Summer 2009 Woodrow Wilson Quarterly there is a reproduction of a poster showing masses of the German unemployed with the caption: “Unsere letzte Hoffnung:Hitler.” The graphic accompanies an article reviewing the voting patterns in Germany after the country began sliding into depression in 1927.

The GNP of the Weimar Republic contracted by a quarter; unemployment soared and incomes fell dramatically. Support for the Nazi Party, less than 3% of eligible voters in 1924, rose to 31% in July 1932, 27% in November 1932, and 39% in March 1933. How did the people vote? The unemployed turned primarily to the Communist Party, which catered to them with a program calling for community property. The working poor, including independent artisans, domestic workers, and family members of the working poor, disproportionately supported the Nazis.

These groups responded positively to Hitler’s denunciation of big government, and promises of intensive development of Germany’s own economic resources and support of private property, and plans for expropriation of land from Jewish real estate owners and resettlement of the landless in eastern Germany.

I must note here that we in the United States have no real Communist Party and the Socialists are a miniscule percentage of the population; however, the right wing is well organized behind leaders like Glenn Beck and Rush Limbaugh, with unlimited financing from the major corporations, especially health care, pharmaceuticals, banking, oil and communications. The unthinking and the fearful seek and will follow a leader who plays to their emotions and prejudices.

In the meanwhile the Senate Finance Committee is releasing its report, the product of many months of work, that essentially reinforces the dominance of the health insurance cartel, with no guarantee of health care for the American public. The report hides behind the cost of universal care. If indeed cost is a legitimate factor, perhaps we should take a close look at what the United States is spending on ongoing fruitless foreign wars and on the futile and absurd war on drugs.

Perhaps we should consider the overhead involved in maintaining over 100 golf courses at various military installations throughout the world, provided not only for our own officer class but for the thousands of paid mercenaries, at hundreds of dollars per day, who augment our armed forces. Perhaps we should look at the numerous tax breaks for the extremely wealthy while the working many assume the real burden.

If we truly desire to provide first class universal health care to the American people, Congress should review the plan put forth by Physicians for a National Health Program, which would reduce national health care expenditures by 30-40%, provide care through a public, non-profit insurance company, with non-political government oversight, and give everyone the choice of physician, hospital and pharmacy, dental and mental health care — free of the current rationing of care by the insurance industry, and the price fixing of prescription drugs by the pharmaceutical industry.

As a second choice, of course, there’s President Obama’s government option plan, about which he equivocates depending upon his audience: in short, Medicare for All. Beware, however, of “triggers” attached to the “public option,” for — as pointed out by both David Sirota and Robert Reich — such legislation is a pure and simple copout. Of course the matter of “insurance cooperatives” is merely handing health care back to the insurance industry with the bonus of mandated health care for all.

And then there’s Speaker Pelosi, backing off on the public option after Steve Elemendorf, a lobbyist for United Health Insurance, announces a fundraiser in her honor. This was exposed by David Sirota in AlterNet, on September 11.

One matter about which the public has an extreme misconception is “non-profit” corporations. The average person thinks of a charitable institution. Nothing could be farther from the truth. Non-profit corporations, such as the various Blue Cross/Blue Shields, are tax-free companies which do not show a profit on their books, but instead show “surpluses.” They are money-making companies, without stockholders, which can pay tremendous salaries to the managers, and con the public further, by taking money which should be used for health care but that instead shows up as lavish contributions in the programs of symphony orchestras, etc.

I noted several days ago an announcement of increases in premiums for 2010, by the local BC/BS providers. Their varied regular plans are going to be increased by 20-25% and the Medicare Supplements by 10-12%. Some 4-5 years ago I recall noting in the local paper that this organization was carrying a surplus of one billion dollars. One wonders why, after the President’s speech to Congress, the insurance industry stock suddenly rose. United Health up 17 cents; WellPoint up 19 cents; Aetna up 59 cents; Humana up $1.12. Is there more that we are uninformed about in addition to President Obama’s covert agreement with the pharmaceutical industry?

Let us put aside the perfidy of the politicians for a moment and look at the providers of health care, i.e. the physicians. Once again, I discount any positions taken by the AMA , which does not represent physicians but is merely an arm of the pharmaceutical and insurance industries lobbyists. The New England Journal of Medicine, the ethical and intellectual center for American medical publications, reports on a poll of 2,130 doctors that showed that 55%, regardless of their specialty, would favor expanding Medicare so that it covered people aged 55 and older.

When given a three way choice among private plans that use tax credits or subsidies to help the poor buy private insurance, a new public health insurance plan such as Medicare; or a mix of the two; 63% supported a mix, 27 % said they only wanted private options, and 10% said they exclusively wanted public options.

The Republicans, reflecting their hostility to trial lawyers, paint malpractice costs as a major factor in the cost of health care, when indeed it accounts for less than 1%. Mal-practice insurance costs are indeed a problem; however, there are three facets.

Finally, the President hasn’t been addressing our depleting supply of primary care physicians. He has referred to nurse practitioners and physician’s assistants, but I have heard no mention of the need to increase our numbers of primary care providers, i.e. family doctors, internists and pediatric specialists.

The American College of Physicians has been very vocal regarding this problem. The ACP — and I — have suggested government subsidies for qualified candidates to go to medical school, or my proposal for a medical academy akin to West Point. Until these questions are addressed we will be unable to match the greater physician population of the European nations.

There is another underlying problem of which I have just become aware — thanks to a report by the Association of Medical Colleges — of decreasing interest among young people, starting back in 1980, in wanting to go to medical school. And 1980 was about the time that medicine ceased to be a profession and doctors became hired “providers” for the insurance industry.

Over the last 20 years, when young folks have asked my advice about pursuing a career in medicine, I have given them a resounding “No,” and have suggested that they look into a life’s work that will provide them a modicum of intellectual independence rather than becoming subservient to the corporations. I am sure other retired physicians are doing the same.

One would hope, now that President Carter has cleared the air, that Obama will set aside his effort to please those who cannot be pleased, and concentrate his energies on fulfilling his promises to the American people — Medicare for All, passing the Employee Free Choice Act, and finally setting aside the foreign policies of President Bush.

Obama promised withdrawal from Iraq and the Afghanistan war has become a travesty that few thinking Americans can comprehend. Professor Andrew J. Bacevich discusses this in Source an article in The Commonweal entitled, “The War We Can’t Win, Afghanistan and the Limits of American Power.” Professor Bacevich had an outstanding military career and is now professor of history and international relations at Boston University. This article once again raises the question of who in fact establishes United States foreign policy — the Defense Department or the State Department.

2 Responses to Health Care Reform, Racism and Memories of Nuremberg