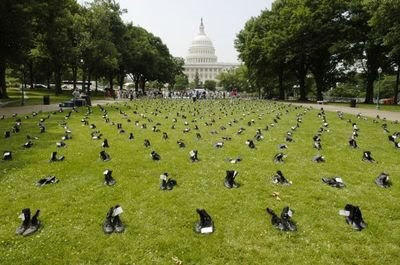 Photo of Eyes Wide Open on the Mall in Washington DC by AFSC.
Boots on the ground in Austin this weekend
By Susan Van Haitsma / The Rag Blog / September 10, 2008

In February 2005, the display of combat boots and civilian shoes called “Eyes Wide Open” came to Austin, where it was assembled on the grounds of Zilker Park at the Peace Grove. At dawn on a misty morning, I joined a crew of volunteers to lay out the boots and shoes. It was a profound experience.

The exhibit drew visitors from the moment the boots and shoes were set down to the night we had to pack them up due to rain chances. Viewers followed the exhibit to the indoor location where it was set up the following day.

Now, three and a half years later, the number of combat boots and shoes representing soldier and civilian lives taken by the invasion and occupation of Iraq has grown so much that the exhibit has been divided by state.

Eyes Wide Open is scheduled to be displayed at Auditorium Shores this weekend along Lady Bird Lake near the hike and bike trail opposite Butler Park. A special program will be presented on Saturday night. It’s not a partisan event. Everyone is invited.

Here are the particulars, as posted at Eyes Wide Open / AFSC.

An Exhibition On The Human Cost of the Iraq War

The exhibit features a pair of boots honoring each Texas military casualty, a field of shoes to memorialize the Iraqis killed in the conflict, and a display exploring the history, cost and consequences of war. To view past Eyes Wide Open exhibits, visit the website http://www.afsc.org/eyes/.

Special candlelight remembrance: Saturday, September 13th, 6:30 to 7:30 p.m. (If you would like to sit during the candlelight vigil, please bring your own chair.)

Hospitality tent for veterans, active military, and their families
Veterans are welcomed to wear medals in solidarity with the fallen