A sweet man of peace, The Rag Blog’s David
MacBryde passed away in Berlin, Wednesday, September 9. 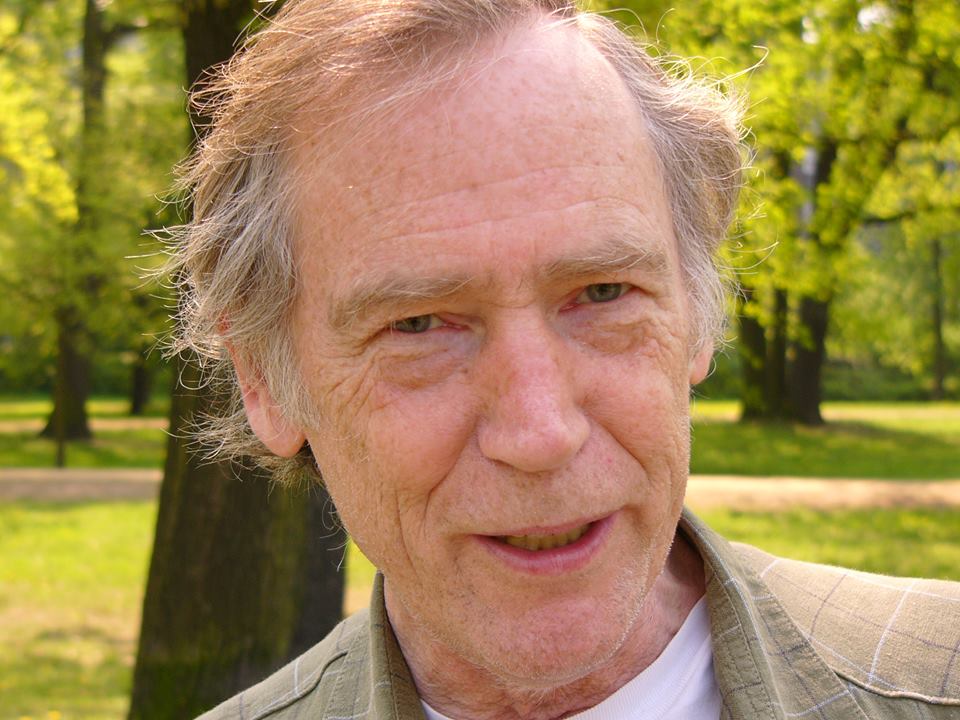 AUSTIN — I lost a dear friend last Wednesday and The Rag Blog lost its “man in Berlin.” David MacBryde, a warm and funny man who played an important role in the struggle for peace and justice in ‘60s and ‘70s Austin — and was a contributor to Austin’s original underground newspaper, The Rag — died of cancer, September 9, 2015, in Berlin, where he had been living since 1981.

David, who had roots in the Quaker Church and continued his social activism through all his years in Germany, studied physics and mathematics at Yale and philosophy at the University of Texas at Austin. He was active with the Students for a Democratic Society (SDS) and Austin’s Armadillo Press, an IWW print shop. He was a UT shuttle bus driver and helped organize a militant drivers’ union.

In Germany, David worked with the “Swords to Plowshares” movement in a program to convert military bases to peaceful civilian use, and with the anti-war American Voices Abroad in Berlin, among many other projects. And as our Berlin correspondent, he graced The Rag Blog with his frequent dispatches. (Find David MacBryde’s Rag Blog articles here). 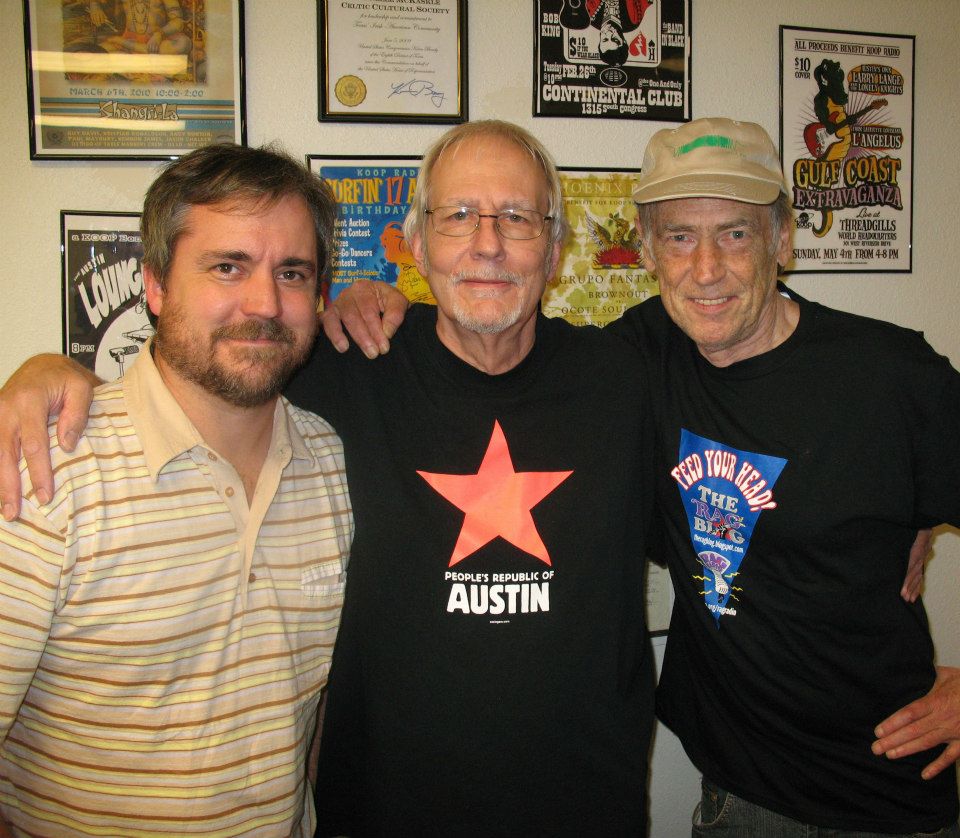 David visited often, was a part of the highly successful Rag Reunion in 2005, and was here when we had a lively Rag Blog gathering at Maria’s Taco Xpress in November 2012, that doubled as a “David MacBryde UT Shuttle Bus Drivers’ Reunion.”

During that trip David and I spent an enjoyable hour reminiscing and pontificating in front of the KOOP mics. He enlightened our listeners with a progressive perspective on developments in Germany and the Eurozone. David had also just attended a conference in Ann Arbor, Michigan, honoring the 50th anniversary of SDS’ landmark manifesto, the Port Huron Statement, and he discussed how the SDS concept of “participatory democracy” had influenced his life and his politics.

You can listen to the podcast of my Rag Radio interview with David MacBryde, here.

Hugh Grady has written a wonderful remembrance of David (below) and we also invite his old friends, colleagues, and co-conspirators to offer their memories in the comment section below the article.

Sabine Sawitzki, David’s partner, has asked that, in lieu of flowers, memorial contributions be made to benefit the Salon at Schloss Wartin. Contact editor@theragblog.com for further information. 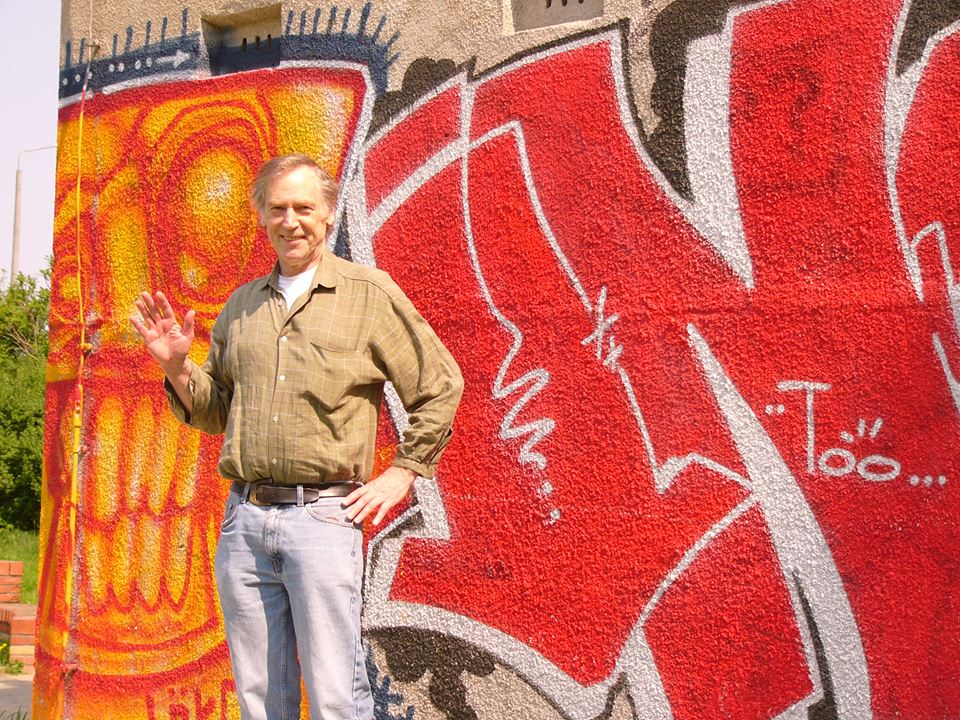 David MacBryde passed away in Berlin, where he had been living since the 1980s, from cancer on Sept. 9, 2015. He was a man of convictions and ideals who dedicated his life to following them. He was a philosophy student who left graduate school to become what he liked to call “a professional revolutionary,” following Marx’s dictum that, “The philosophers have only interpreted the world in various ways. The point, however, is to change it.”

Many readers of The Rag Blog will remember Dave from his long residency in Austin during the heyday of the New Left movement of the late 1960s through the 1970s. He had been active in Austin SDS (Students for a Democratic Society) until it dissolved in 1969 and afterwards was a member of the Austin chapter of New American Movement during the entirety of the 1970s. He also was a member of the Shuttle Bus Drivers Union and worked as well with the Latin American Policy Alternatives Group (LAPAG) and in many, many, shorter term projects and groups. 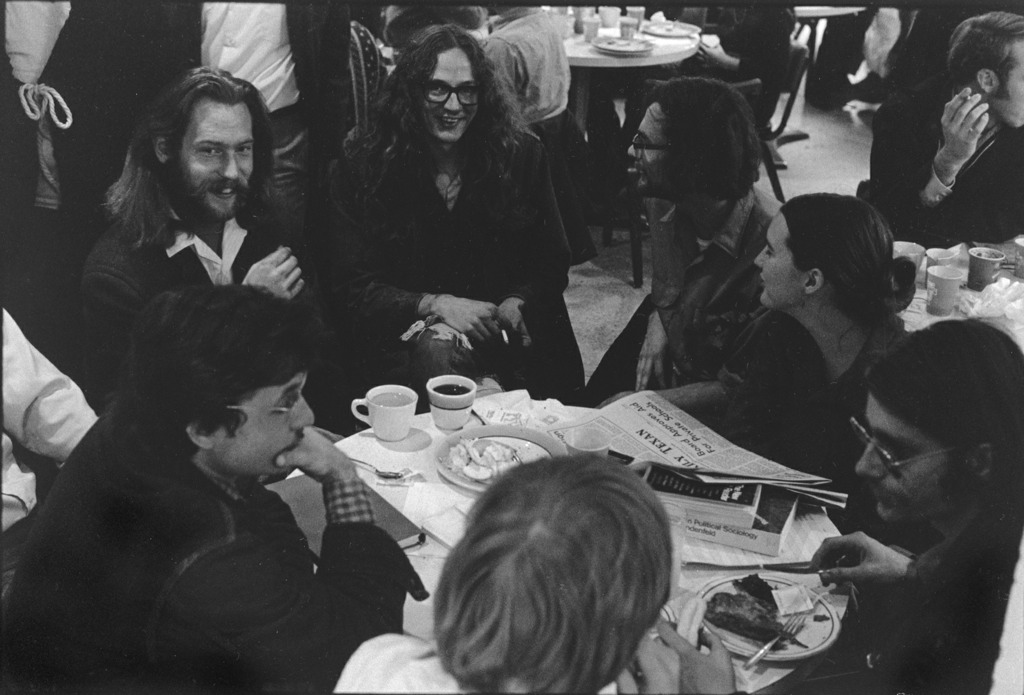 Activists in the Chuck Wagon at UT-Austin, probably 1969 or ’70. David MacBryde is at rear left. Photo by Alan Pogue / The Rag.

I met David sometime during my first two years in Austin, 1971-1972. I came to UT to go to graduate school, but having been a witness of the great upheavals in France of May-June 1968, I wanted to find a way to be politically active in Austin while I studied. Inspired by the French student movement I became a member of Fordham SDS my senior year at college, and a year later as a VISTA volunteer in Houston with my wife Sue Wells, I occasionally wrote for the Houston underground paper Space City!

We arrived in Austin in the fall a year and a half after the great Cambodia protests had galvanized thousands and thousands of students nationwide and at UT-Austin in particular. Even though SDS was defunct, the national anti-war movement was still thriving, the Black Panther Party was serving thousands of breakfasts in its communities, and we thought the Movement, whether on or off-campus, had a bright future. We were thrilled that Austin was a large center of New (and old) Left activity with many different kinds of radicals to get to know and work with.

David was an intriguing person and played a great part in furthering my radical education.

David was one of the most intriguing people that I met, and he played a great part in furthering my radical education. He was a “cultural radical” who believed that the lifestyle changes associated with the youth culture of the 60s were important social and political developments that needed to be nurtured and preserved — an easy enough task in the Austin of that period, to be sure!

He thought that the American working class now extended far beyond the traditional blue collar precincts the term usually called up and that the cultural radicalization of working people of all sorts was the best hope for enlarging the Movement and ultimately creating a meaningful revolution that would not be just a change of rulers. 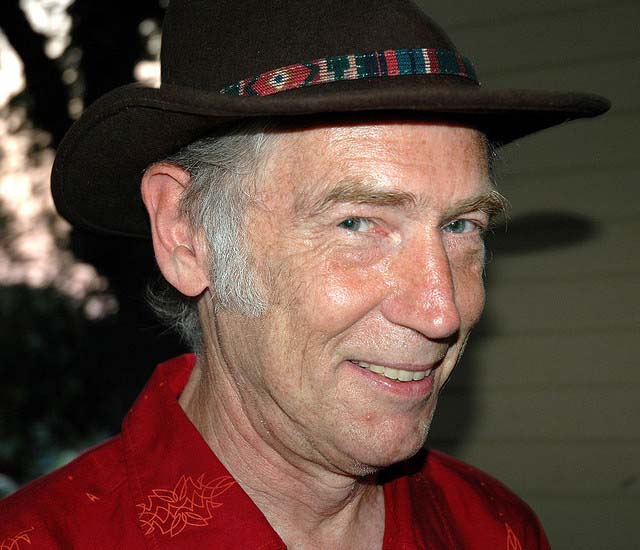 David at the Rag Reunion in Austin, September 1, 2005. Photo by Carlos Lowry / The Rag Blog.

He thought that the advancements that feminism was making in those heady years were crucial ones and needed to be part of our politics. We became close friends when we each decided to join the new Austin chapter of New American Movement early in 1973.

He had a mischievous sense of humor along with his bedrock desire for social and political change.

David’s personality was subtle. He was quiet, at times even reserved, and he always kept a cool head at political moments of high heat — a very valuable trait. But he could be intense, and he had a mischievous sense of humor along with his bedrock desire for social and political change.

I remember one of the first times I saw him in action was at the infamous 1971 Party Where Men Wore Dresses, organized by one of the many feminist consciousness-raising groups of the time and a challenge to Movement men to show their politics by wearing women’s clothes to a political/social event aimed at educating all about the dynamics of gender roles and clothes.

Dave showed up in a great outfit and, always one to want to exploit new technology for the Movement, he carried a video camera to record the event for posterity. Oddly, that effort met with considerable hostility from some participants, and he had to give it up, which he did with good humor, but the effort and enthusiasm were completely typical of him.

I remember another occasion, when the first incarnation of Austin NAM was having hard times, and a scheduled chapter meeting was attended only by myself, Sue, and David. David was resolute in his conviction that the three of us should keep going and rebuild — and amazingly we managed to do so. A long story, but it wouldn’t have happened without him. 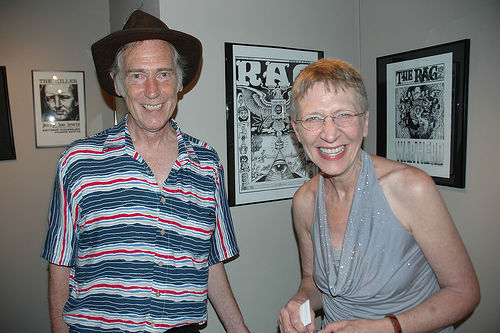 David with Sarito Carol Neiman, the original “funnella” of The Rag, at the Rag Reunion. Photo by Carlos Lowry / The Rag Blog.

In 1975, a revamped and revivified NAM chapter decided it was time to think about long-term projects with staying power that could draw involvement from students at UT and members of the larger Austin community. With the help of a friendly investor, we were instrumental (along with others, especially Billy Pope) in purchasing a house on San Gabriel Avenue (it has since been demolished) to create the Bread and Roses Center for Socialist Education.

He became the face of Bread and Roses and was one of the sources of energy behind it.

Bread and Roses needed a resident administrator, and characteristically, David volunteered for that role. He became the face of Bread and Roses and was one of the sources of energy behind it in its lifetime of five or six years. We offered classes on topics ranging from women’s health to introduction to Marxism, had numerous speakers, parties, meetings, art exhibits, singing nights, and fund-raisers that helped create a sense of hope and political activism in the second half of the 1970s.

That time of the 70s, when Dave and all the other activists of that period continued to carry the torch, now seems in hindsight a series of beautiful years of idealism. But they also leave bittersweet thoughts of the possibilities for a much more just and more humane American society. A different outcome from the one we live with now didn’t seem all that impossible in that time and place. We didn’t think revolution was imminent, but we were hoping to bridge the growing gap between the peak of New Left activism and something that we hoped would succeed it and be even bigger. 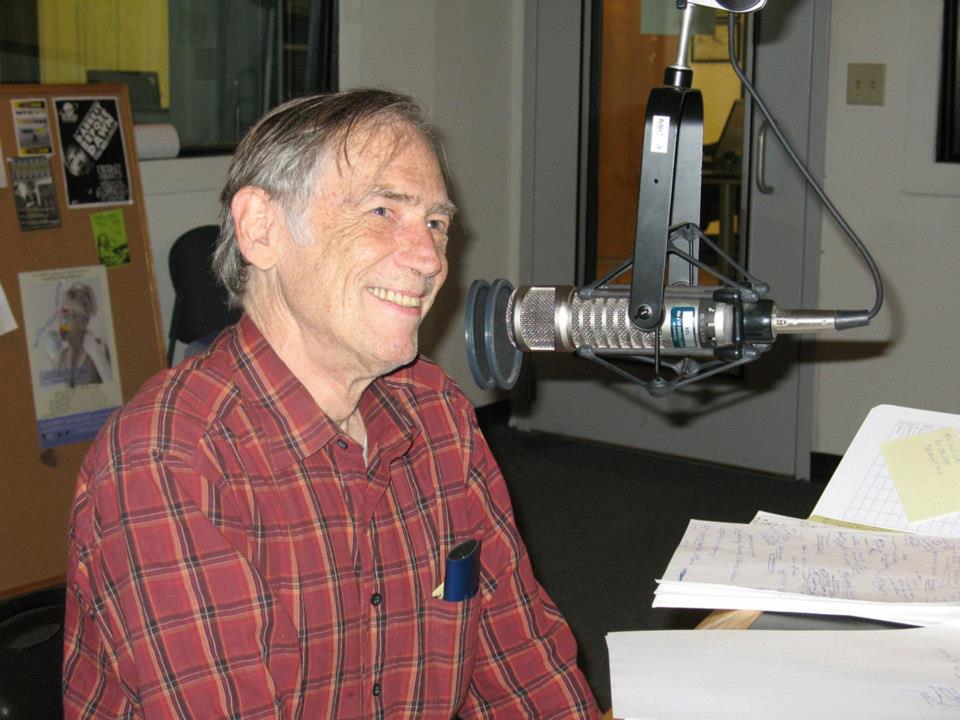 David on Rag Radio at the studios of KOOP-FM in Austin, November 10, 2012. Photo by Tracey Schulz / Rag Radio.

I often wonder what could have happened had not the rise of radical Islam in Iran and the hostage-taking of Americans there derailed the left-wing insurgency against the moderate policies of Jimmy Carter. Instead, conditions were created for the election of Ronald Reagan and a marked rightward shift in U.S. politics and culture. We have been living with it ever since.

Austin was a kind of golden afterglow following the tumultuous and scary late 1960s.

Austin in those years was a kind of golden afterglow following the apocalyptic rhetoric and practice of the tumultuous and scary late 1960s. It was a time for living our politics and trying to build for the long run. We had a great time — and so much fun. In many ways, speaking strictly for me, it was the best time of my life.

David was a huge part of that. He was a great comrade and morale-builder, just as he continued to be when he decided to build a new life in the New Left culture of Berlin, where he remained until his death.

I talked to him on the phone this last August, when I had finally heard about his bad diagnosis and prognosis. His spirits were high and he was of good cheer. “We all have to die of something,” he said. That was David. The world is a much poorer place without him.

[Hugh Grady was active in the Austin left from 1971 to 1978 as a member of Austin New American Movement (NAM) as he attended graduate school in the UT Comparative Literature Program. He has just retired from a college teaching career at Arcadia University and lives outside of Philadelphia, where he is doing writing and research.]