“Working people are as ubiquitous as Blue Jays. When they fly they’re beautiful.”

No one wants to be saddled with labels from the past, certainly not that ubiquitous species known as the creative writer. But even writers — or perhaps especially writers — have emotional attachments to moments and to spaces from the past. That’s true for Beverly Gologorsky, the author of the 1999 novel, The Things We Do to Make it Home — and a new novel, Stop Here (Seven Stories; $16.95), the title of which practically shouts its presence.

A long-time activist, Gologorsky edited two anti-war publications — Viet-Report and Leviathan — that made a difference by informing and inspiring. She also played a part in the women’s liberation movement in New York in the 1960s and 1970s.

But before the long decade of defiance and resistance to the war and to the patriarchy, she was shaped by her blue collar and pink collar neighborhood in The Bronx where she grew up like everyone else in her generation, in the shadow of war: World War II, the Korean War, and the Cold War. Moreover, like the women characters she writes about in Stop Here, she worked as a waitress.

I’ve known Gologorsky since about 1970 when, if I remember correctly, we rallied in the streets and sat through interminable meetings. I interviewed her in 1999 when her first novel came out. “Writing is the only thing that really makes me happy,” she told me then. When asked the same question recently, she said, “I should have said — and I feel now — that I don’t always understand myself. Writing is my connection to the universe.”

In many ways, she’s a perfect perfectionist. She writes and rewrites and rewrites some more. Sometimes she’ll rewrite a chapter 12 and 13 times. She’ll put a book away for years, then come back to it and start anew. In her new novel, Stop Here, she writes with the ears of a poet and the eyes of an historian, with compassion and love and with a sense of solidarity, too.

“There’s no way to ignore the warmongering on Fox News, though Ava is trying,” her new book begins. From the start, you know where you’re at, though you don’t know where the book will take you or how it will end. There’s no stopping the momentum of the story once in starts and the characters are unstoppable, too.

Labels are rather limited — and yet they’re also essential. You could call Gologorsky a daughter of the working class, a feminist and a novelist shaped by the New Left. That’s all true. Still, I’d suggest that you read her novels and forget about the labels. In Stop Here, you’ll want to linger at Murray’s Diner, meet the customers and the employees, and watch as the drama of their lives unfolds against the backdrop of war and resistance.

If you want to read a novel by a radical from the past who’s still a radical, read Stop Here. And if you weren’t a radical then and aren’t one now but you’re curious about the lives of Americans who watch Fox news, this novel has your name written all over it. 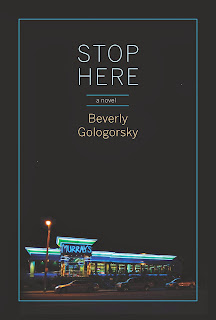 Jonah Raskin: Here it is September 11 again. What do you remember about that day in 2001? Where were you?

Beverly Gologorsky: I had just turned on the news in my Upper West Side apartment and after the first sentence the station (NPR) went dead. That was the first plane. Never before have I experienced New York City as quiet of traffic and airplanes as it was in the next three days. Never before had I seen actual shock on ordinary people’s faces as I did that day.

Was it a pivotal point in your own life? If so how?

No, though I must admit it remains unforgettable. Particularly, the few days after the event, the sense of burning bodies, the smell, and the sadness of it did permeate all else. No one I knew could work or think about anything except the death and destruction. My doctor friend ran to a hospital to help out, but hardly any bodies needed attending. Horrid. After two days, I went with friends and came as close to the devastation as permitted. The feeling of loss was palpable.

What if anything have Americans learned from 9/11?

Mostly, I fear, the wrong lessons. What should have been seen as a criminal act became a war on state terrorism. So many unnecessary deaths occurred and still do on a lesser basis. Fear was ratcheted up among the populace here, which allowed so much to be done to others in our name that wasn’t necessary and was in fact evil. I speak here in particular of Iraq.

It seems to me that American history for the past 80 years or so is a record of war, bombings, invasions, and mass death? How would you describe this last phase of history?

Unfortunately, what you say is true, however, I maintain that people, lots of them, can change policy. It takes a village and it takes patience.

You have written about the impact of war in two novels, The Things We Do to Make it Home from 1999 and your new novel, Stop Here. Why have you focused on war?

I don’t see myself focusing on war, per se. Rather, the characters that speak to me happen to be for the most part working class men and women and it has always been their lives that have been affected by war. Also, in my novels, I speak of their relationships to one another not only to the results of war.

The War in Vietnam really was different wasn’t it, as wars go? The opposition was immense, the friendship between the Vietnamese and the American ran really deep, and the solidarity of the global community was awesome. Was that time an aberration in history?

I hope not, and I don’t believe so. There are too many reasons for me to go into here, but let me say that many factors keep movements from forming or from not forming.

They are figures from my imagination and composites of various people I’ve met. But as Gustave Flaubert, the French novelist, said, “Every character, C’est moi.”

Much of your new book takes place in a diner — that all-American institution. It’s what the café is to France and the pub to England. How did the idea of the diner come to you?

It was always the cheapest place to eat, the one where you could sit and rap with your friends or family for hours. I love diners.

One of my favorite authors, B. Traven, said that working people were far more interesting from a novelist’s point of view than rich and famous people? What do you think of that comment?

Working people are as ubiquitous as Blue Jays and when they fly they are beautiful.

You wrote for and edited Leviathan and for other anti-war publications. What did you learn about writing from that experience?

A great deal about challenge and about patience. Many of the encounters with other writers were learning experiences. It was the period in which I was gathering my own worldview.

Women writers talk about the gender imbalance in publishing, reviewing, and publicity. While women read more books than men, buy more books, belong to more book groups, male writers are reviewed more often and get more space. It looks like the patriarchy controls a lot of the book industry. Does that affect you?

Yes. Newspaper and magazine review space has dwindled. It’s barely there, and what little space there is isn’t shared evenly, so we need to keep up the pressure so the inequitable coverage will change. We can do that. We have in the past, around other male-dominated venues. So I’m hopeful.

What is it that women today most need to know and appreciate about the women’s liberation movement from the 1960s and 1970s?

Women need to continue to educate other woman about the progress, as well as the failures: to say what needs to be done and perhaps even how to do it.

[Jonah Raskin, a regular contributor to The Rag Blog, is a professor emeritus at Sonoma State University and the author of For the Hell of It: The Life and Times of Abbie Hoffman and American Scream: Allen Ginsberg’s “Howl” and the Making of the Beat Generation. Read more articles by Jonah Raskin on The Rag Blog.]

1 Response to INTERVIEW / Jonah Raskin : Novelist Beverly Gologorsky Was Shaped by Sixties, Feminism, and The Bronx