Iran and the Geneva Talks 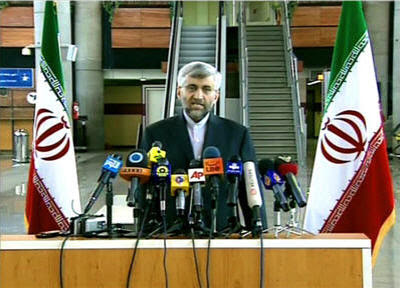 Secretary of Iran’s Supreme National Security Council, Saeed Jalili expressed Tehran’s readiness to cooperate with the international community in all areas, saying he entered the talks with six powers in Geneva with “good will.” Photo: Al Alam.
Real Progress With Iran
By Gary Sick / October 4, 2009

The Geneva nuclear talks were just baby steps along a long and perilous path. Still, this was a historic moment after 30 years of mutual recriminations and hyperbole.

If you have any doubt that the Geneva meetings with Iran were surprisingly productive, just go back and look at the commentary the day before they began. Even allowing for the fact that the United States and its negotiating partners (the five permanent members of the United Nations Security Council plus Germany–the P5+1–plus European Union negotiator Javier Solana) were trying to lower expectations to the political equivalent of absolute zero, it was still difficult to find anyone who anticipated anything like real progress. Yet that is what happened.

Iran had issued a bland five-page document that scarcely mentioned the nuclear issue. They insisted that the newly discovered Qom enrichment site was not only perfectly legal but utterly routine. They let it be known that they had no intention of discussing their own nuclear program in these talks. Yet, from the accounts we have so far, it appears that Iran came prepared to make concessions about Qom, permitting IAEA inspections to begin within the next two weeks or so. As for their nuclear program, almost nothing else seems to have been discussed.

The United States blustered that it was preparing “crippling sanctions” to be imposed on Iran if they did not “come clean” about their nuclear activities. In the end, it appears that sanctions were not a significant topic, and the Western side was prepared to make some significant concessions of its own.

By all accounts, instead of being a food fight leading to a total breakdown, the Geneva talks were serious, businesslike, and even cordial. The top U.S. negotiator, Undersecretary of State William Burns, had a one-on-one meeting with Iranian top negotiator Saeed Jalili, in which they reportedly talked substantive issues. That is something that had not happened in thirty years. During the latter years of the Clinton presidency, Iranian officials conducted desperate evasive maneuvers to avoid any direct contact with American officials, and during the first six years of the George W. Bush administration, American officials did the same with their Iranian diplomatic counterparts. The orders on both sides to avoid official contact at risk of one’s professional career seem to have been relaxed, at least for this occasion.

What did this meeting actually produce? Iran agreed to permit inspections of its new site. The Western negotiators came up with a clever ploy to permit Iranian low-enriched uranium (LEU) to be sent to Russia for further enrichment, probably from about 5 percent to about 20 percent, and then transported to France to be fabricated into fuel rods to feed the Iranian research reactor (ironically given to Iran by the United States in an earlier day), which is used to produce isotopes used for medical purposes. This had many dimensions. First, it reduced the Iranian LEU stock below the level required to produce a nuclear device. Second, it established the principle that Iranian enrichment could be conducted outside the country. But third, it promised to provide Iran with uranium enriched well above the level required for nuclear power reactors (but not yet at the level required for bomb-building). And lastly, it tacitly acknowledged Iran’s right to produce enriched uranium. Nothing in the reports we have seen to date indicate that the Western interlocutors insisted on the previous red line that Iran should abandon its enrichment program.

Finally, the two sides agreed to meet again later this month. At a minimum, that suggests that they believed there was more to be discussed.

Both sides evidently came prepared to behave civilly, to make some small but important concessions, and to initiate a process of negotiation that has been on ice almost since the moment that George W. Bush decided, for arcane reasons of his own, to declare Iran (which had just finished working closely with the United States to establish a new civil government in Afghanistan) a charter member of the Axis of Evil.

One swallow does not a summer make, and it would be a mistake to think that the results of the Geneva meetings were anything more than the first baby steps along a perilous and unpredictable path. Those perils were unmistakable in the words of President Obama in his brief remarks immediately following the talks. In carefully chosen words, he remarked that “today’s meeting was a constructive beginning, but it must be followed by constructive action by the Iranian government.” His emphasis was almost exclusively on our demands on Iran and what remained to be done, rather than on what had been accomplished.

Obama’s speech was clearly directed to his domestic constituency, and particularly the right wings of both the Democratic and the Republican parties who had openly hoped or expected that the meetings would lead to early, severe sanctions against Iran. It was also no doubt intended to maintain the pressure on the Iranian side and to demonstrate that we would not settle for a few welcome, even unexpected, gestures of cooperation. That skeptical tone may have been dictated by negotiating strategy and political necessity, but I wonder if we will be as understanding when the Iranian leadership makes similarly dismissive remarks.

Still, this was a historic moment after 30 years of mutual recriminations and hyperbole. Under the circumstances, even simple civility was remarkable. Both sides behaved themselves almost as grownups, when it would have been easier to descend into a school yard rumpus.

We can hope that the Western negotiators keep their eye on the fundamental objectives of these talks. Instead of drawing new red lines, which are typically ignored by the Iranians and which have proved both futile and counterproductive, we need to pursue two clear goals. First, we need to insist on maximum inspection and monitoring of all aspects of Iran’s nuclear activities. Secondly, we should attempt to minimize Iran’s development of the precursors of a nuclear weapon. In other words, we should install an early warning system that will tell us with some confidence if Iran decides to depart from its obligations under the Non-Proliferation Treaty and build a bomb; and we should seek to maximize the time between such a decision and the moment when Iran could actually produce a deliverable weapon.

Those are realistic goals and they are consistent with Iran’s own statements and past practice. But they will not easily be achieved in a negotiating climate of hostility and mistrust. This meeting offered the prospect that the “wall of mistrust,” as former Secretary of State Madeleine Albright and former Iranian President Mohammed Khatami described it, is not necessarily impermeable.

The process that has been started is going to be neither short nor serene. It is, however, the only game in town. And it is off to a better start than any of us had a right to expect.

This entry was posted in RagBlog and tagged Iran, The World, World Opinion. Bookmark the permalink.

1 Response to Iran and the Geneva Talks