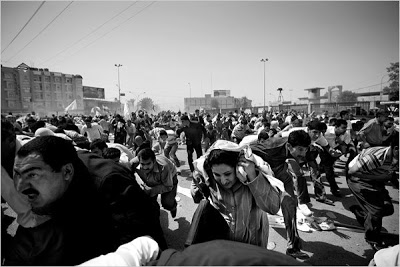 The aftermath of a suicide attack on Kurdish demonstrators three weeks ago.
Photo: Benjamin Lowy/VII Network
Kurdish Control of Kirkuk Creates a Powder Keg
By Richard A. Oppel Jr. / August 18, 2008

KIRKUK, Iraq — The phone rang, and it was answered by a Kurdish security commander, Hallo Najat, sitting in his office in this deeply divided city. On the line, he said, was a United Nations official wanting to know whether it was true that the Kurdish militia, the pesh merga, had left its bases in northern Iraq and was occupying Kirkuk.

No, Mr. Najat told the caller. But after hanging up, he wryly revealed the deeper truth about Kirkuk, combustible for its mix of ethnicities floating together on a sea of oil: the Kurds already control it.

Of all the political problems facing Iraq today, perhaps none is so intractable as the fate of Kirkuk, a city of 900,000 that Kurds, Arabs and Turkmens all claim as their own. The explosive quarrel over the city is one major barrier to creating stable political structures in the rest of Iraq.

Beyond that, it demonstrates that despite a recent decline in violence, Iraq’s unsettled ethnic and regional discord could still upend directives emanating from Baghdad and destabilize large swaths of the country — or even set off a civil war.

This month, legislation in the national Parliament to set the groundwork for crucial provincial elections collapsed in a bitter dispute over Kirkuk, as Arabs and Turkmens demanded that the Kurds be forced to cede some of their power here. But with the Kurds having already consolidated their authority in Kirkuk, there seemed little chance — short of a military intervention — of that happening.

Kurdish authority is visible everywhere in the city. In addition to the provincial government and command of the police, the Kurds control the Asaish, the feared undercover security service that works with the American military and, according to Asaish commanders, United States intelligence agencies.

Asaish officers are often the first to the scene of an attack and, other Kurdish officials concede, seem always to have the best intelligence. The leaders of the Asaish report only to the dominant Kurdish political parties, the Kurdistan Democratic Party and the Patriotic Union of Kurdistan.

“He’s my boss,” said Mr. Najat, the commander of the K.D.P. Asaish force in Kirkuk, glancing at a picture of Masrur Barzani, the head of intelligence for the K.D.P. and the son of the party’s leader, Massoud Barzani.

The Kurds’ control over the security forces — and their ability to use it for political purposes — was evident three weeks ago, rival groups say, after a suicide bomber attacked Kurdish demonstrators, igniting a riot that left dozens dead and hundreds wounded.

After the attack, a mob of Kurds set upon a Turkmen political headquarters, eventually firebombing the building. At some point, the Turkmen guards inside fired at the crowd. All in all, American officials say they believe, far more people were killed and wounded in the riot than in the bombing that touched it off.

Yet, while the police quickly arrested 13 Turkmens at the headquarters, charging them with firing on the crowd, they did not apprehend any of the Kurds who burned the building. One of the Turkmen guards wounded in the fighting was quickly interrogated at the hospital by the Asaish and the police. A video, in which the guard says he was ordered to fire on the crowd, soon appeared on Kurdish television.

Kurdish police commanders promise an impartial investigation of the bombing and its aftermath, overseen by officers from all of the city’s ethnic groups. But the senior Turkmen on the force, Maj. Gen. Turhan Abdul-Rahman Youssef, fears a whitewash.

“I don’t think we will have a result,” he said, describing the broadcast showing the wounded Turkmen guard as “illegal.”

The Kurds’ accumulation of power has stoked tensions with Arabs and Turkmens. “There is much fear,” said Mohammed Khalil, the leader of the Arab bloc on the provincial council. “The Asaish are saying they will annex Kirkuk by force, and that is terrifying people.” Arabs also say the Asaish carry out kidnappings, a charge Asaish officers deny.

But rival ethnic leaders also warn that the Kurds’ control of the security forces will not prevent chaos in the event of an outbreak of ethnic fighting. The city’s Arabs, Mr. Khalil said, “will not stay handcuffed by Kurdish actions.”

Under Saddam Hussein, tens of thousands of Kurdish families were ousted from Kirkuk, replaced by Arabs as part of his drive to obtain a firmer political grip on the enormous oil reserves here. But after the American-led invasion of Iraq in 2003, Kurdish militiamen reversed the process, driving out Arabs and bringing in Kurds. Arabs and Turkmens now make up about 40 percent of Kirkuk’s population, according to American military estimates.

The Kurds want to fold Kirkuk into the neighboring Kurdistan region. They also warn that any plan stripping them of power will be harshly contested.

“Its fate will be failure,” said Nejad Hassan, the senior Kurdistan Democratic Party official in Kirkuk.

After the suicide bombing, that conflict was evident in a dispute about whether to bring a substantial number of Iraqi troops into the city, in a direct challenge to Kurdish supremacy.

In a series of sweeps conducted with the Americans, the Iraqi Army has helped establish stability this year in other volatile parts of Iraq. But Iraqi troops have largely stayed out of Kirkuk.

After the July 28 attacks, however, Prime Minister Nuri Kamal al-Maliki ordered in a battalion from a nearby base. The troops took up positions in the city.

Aware that part of the proposal being debated in Baghdad was to send a far larger force from central and southern Iraq to administer security — which would mean a mostly Arab force, loyal to the Baghdad government, set against Kurdish-controlled forces — the Kurds objected strenuously.

Kurds were not the only ones opposing the deployment of a major Arab security force after the violence. The American military commander here, Col. David Paschal, said he feared that if Baghdad sent in additional troops, Kurdish leaders would retaliate by sending in their own militia from northern Iraq, creating a potentially disastrous confrontation.

“I just saw this continued escalation of force happening,” he said. Baghdad is expected to withdraw the troops, according to American commanders.

Colonel Paschal blames all the political parties for inflaming tensions to serve their interests. But he said it was difficult to comprehend the level of mistrust.

“Negotiations here are, ‘You give me everything I want, and I will walk away happy,’ ” he said. “It is hard for us to appreciate the level of ethnic hatred.”

The severity of those tensions became indisputably clear three weeks ago when thousands of Kurds poured into central Kirkuk to protest the power-sharing proposal in Baghdad.

In a video that American commanders say they believe to be authentic, a young man who the Americans say appears to be the bomber, not a woman as Kurdish officials initially said, can be seen standing in a sea of demonstrators. He ritualistically raises his hands, palms up, toward his face, then lowers them to his side. An instant later the explosion engulfs him and everyone around him.

It took only a few moments for the demonstrators to turn their fury on the Turkmens, whom they instantly blamed. One mistook a well-known Kurdish journalist, Yahya Barzanji, for a Turkmen correspondent, shouting, “He’s working for the Turkmens,” Mr. Barzanji recalled. A video captured the crowd furiously beating Mr. Barzanji, chanting: “Kill him! Kill him!”

Within minutes the mob was in front of the Turkmen party headquarters. While American and Kurdish officials agree that the Turkmen guards fired into the crowd, Colonel Paschal — who watched the skirmish unfold in a video feed from a remotely piloted aerial drone — said that the Turkmens did not appear to fire wantonly, and that they instead gradually escalated until they were firing directly into a large and growing mob that posed a threat.

All told, at least 28 people died and 213 were wounded in the suicide attack and the ensuing riot, according to the Asaish commander at the main hospital. Kurdish authorities have sought to play down the intensity of the fight between the Kurds and the Turkmens, but Colonel Paschal said most of the casualties were sustained during the riot.

Despite this outbreak, Colonel Paschal said attacks in Kirkuk had dropped by two-thirds since last summer. Kurds attribute some of that improvement to the Asaish.

“They are in direct contact with the people,” said Hemin Shafiq, a 24-year-old policeman. “They are more rapid. That is why they are much more active than the police.”

Rifat Abdullah, the leader of the Patriotic Union of Kurdistan here, said: “The Asaish have lots of sources, and that’s why the Americans depend on them and the police depend on them. That might explain why they have more power.”

General Turhan admitted that the Asaish officers were, at times, more powerful than the police, and he said there were thousands of Asaish in the city, though Kurdish officials say there are no more than 1,000. “They have a major role combating terrorism, but the problem is they are loyal to the political parties,” he said.

In an interview, the provincial police chief, Maj. Gen. Jamal Taher, a Kurd, did not answer a question about whether he had the power to control the activities of the Asaish. But he praised their ability to ferret out information.

“Maybe they have better sources than me,” he said.

This entry was posted in RagBlog and tagged Iraq, Iraq War. Bookmark the permalink.