Influential singer-songwriter was also the ‘Mayor of Montrose.‘ 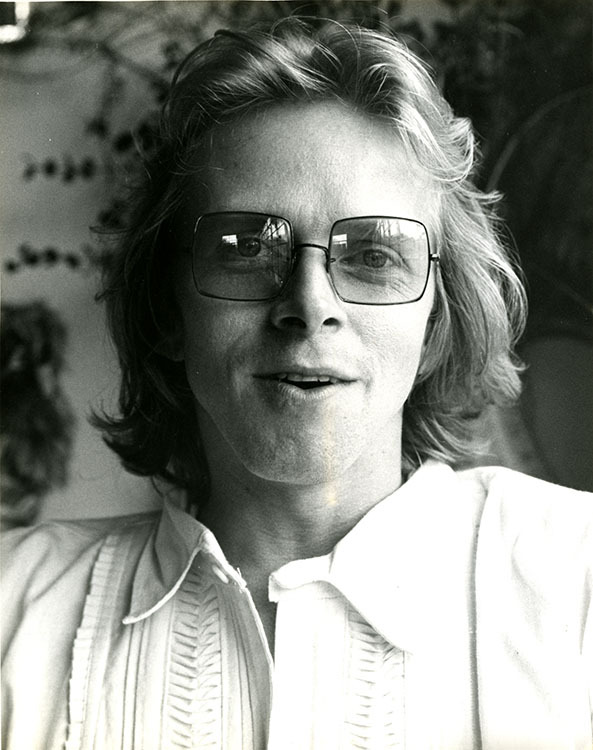 HOUSTON — On the wall of the back room of Sand Mountain Coffee House, Houston’s one-time folk mecca located on Richmond Avenue in the Montrose neighborhood, patrons were greeted by a mural of several performers who, at one time, graced the stage of Mrs. Carrick’s songwriter proving ground. The mural was a collage of images that included Sand Mountain regulars: Guy Clark, Townes Van Zandt, Mickey Newbury, Jerry Jeff Walker — and the late Don Sanders.

Prior to his passing, on July 18, Sanders’ wife, Kathy Butler, instructed a friend to post the following message on social media:

I write with an update about Don. He has entered the active phase of dying. He has not eaten or had anything to drink since Wednesday morning. He has not been out of bed since early Wednesday evening. Thanks to the wonderful efforts of hospice, he has been resting very comfortably most of the time.

I ask that you all send your prayers and wishes that Don’s passing will be easy. I love you all and thank you for all the support and love you have provided me during Don’s illness.

Sand Mountain opened its doors in 1965 to fill a void in Houston’s folk music market.

In 1965, high school-age friends, John Carrick and Steve Gladson, opened Sand Mountain Coffee House to fill a void in Houston’s folk music market. Realizing that her adolescent son’s business disposition left much to be desired, Corrine Carrick took over the club and relegated the two partners to other menial duties. 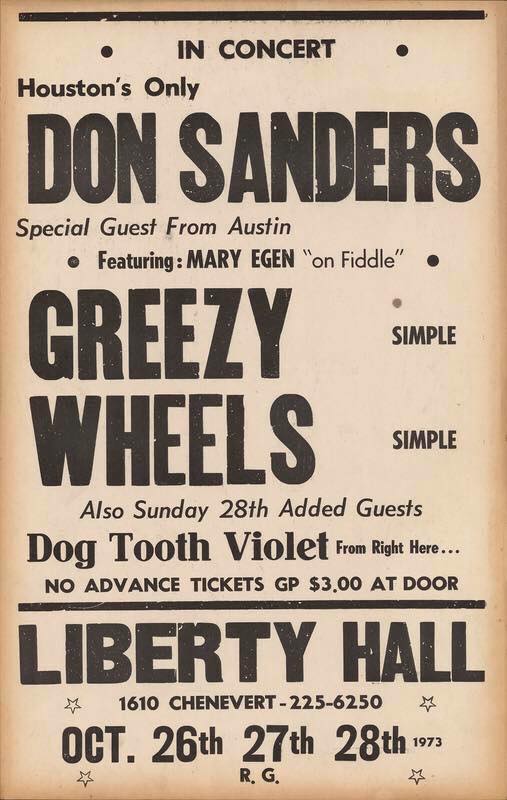 “Mom was a go-getter and a real entrepreneur,” Carrick confided. She then hired Sanders, a recent University of Houston honors graduate, to help with management and booking duties in exchange for room and board in the apartment above the club.

The music of Don Sanders was not for everyone; you either liked him or you didn’t. He was a wordsmith, but one has to look to whom his contemporaries were during those early years and by whom he was influenced. One could easily define the quirky and unconventional Sanders as the David Byrne of folk music or perhaps one could say that David Byrne is the Don Sanders of alternative rock.

Sanders always performed with a twinkle in his eye and sly grin on his face.

With his unique style and delivery, Sanders could always be seen performing with a twinkle in his eye and sly grin on his face, leading one to believe that he knew a secret about something that you didn’t. However, that was just fine because his welcoming and casual stage presence seemed to convey the message: “Come on in and sit down, listen to what I have to say, and let me sing a song or two for you.” 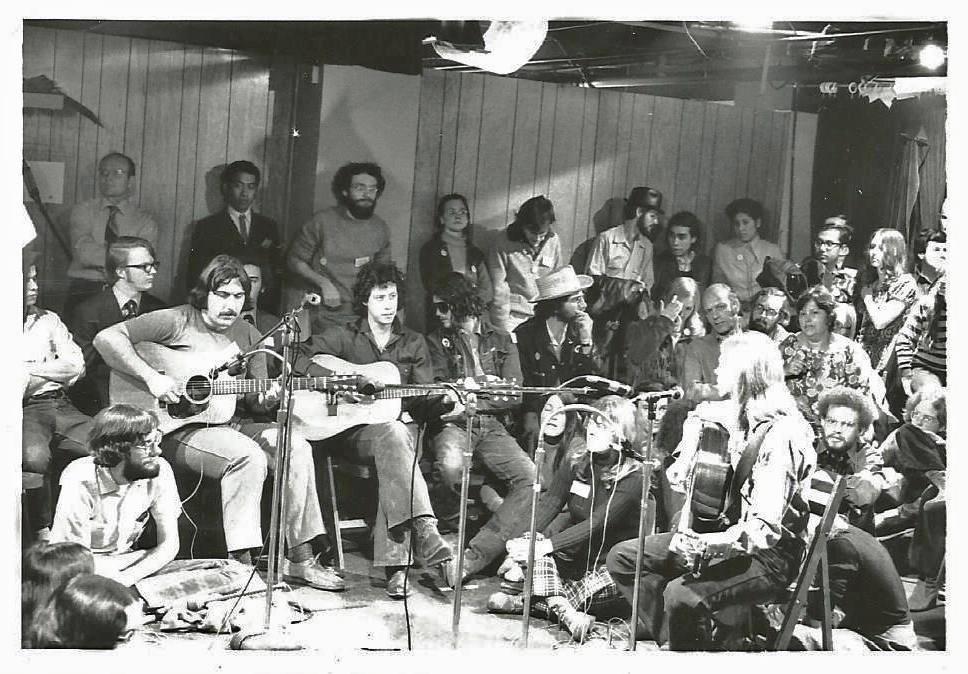 Arlo Guthrie and Don Sanders perform on national television as Houston’s KPFT-FM returns to the air after the KKK blew up the Pacifica station’s transmitter. Courtesy Kuper Group Archives.

Sanders was at the forefront of the founding of Houston’s progressive, noncommercial radio station and Pacifica affiliate, KPFT-FM, in 1970, and was an on-air personality in the station’s early days.

This was the very same public station that was bombed off the air, not once, but twice. Historically, KPFT-FM is the only radio station in the United States that has ever been under attack by right-wing extremists. The transmitter bombing was the handy work of four members of the Pasadena, Texas “Klavern” of the United Klans of America, Inc. aka the Ku Klux Klan. However, only one Klan suspect, “Grand Wizard” Jimmy Dale Hutto, age 24, was formally indicted and served time for the offenses.

In January 1971 when the PBS television program The Great American Dream Machine, produced by New York’s WNET-TV, came to town to broadcast the station signing back on the air after an eight-month interruption, it was Sanders that the nation saw swapping songs with counterculture folkie, Arlo Guthrie, live on the air, from the basement of the Atlanta Life Insurance Building in downtown Houston. Sanders was also prominently featured in Bruce Bryant’s and Jim Barham’s 2010 documentary, For the Sake of the Song, a film about the music scene at Anderson Fair Restaurant, another Montrose venue that fostered songwriters and where Sanders was also known to perform.

“Don had a good heart and was always working to get better at what he did,” Carrick reflected, “and I can’t think of anyone who ever had an unkind word to say about him in his entire lifetime, nor did I ever hear an unkind word uttered about anyone from his mouth either.”

However, Sand Mountain co-owner, Carrick, is also fond of telling the story of when he and Sanders were in a greasy spoon cafe called “One’s-a-Meal” late one night in Houston and sitting at the next table were your typical Texas good old boys who were looking for trouble. After a heated exchange of words, the usually mild-mannered and level-headed philosophy major stood up, walked over to their table, and gave one of his best impromptu performances.

“Don thought those late night restaurants were also public performance spaces,” Carrick reminisced. “He was really funny and spontaneous, and one night some rednecks at the next table were making cracks about Don and his long hair and he really lost it and jumped up with a salt shaker in his hand and loudly threatened to insert in an unlikely place. I swear those ‘necks’ were totally freaked out and left quickly.

‘Don said how relieved he was they
didn’t kick his ass.’

“After the adrenaline rush was over,” Carrick continued, “Don said how relieved he was they didn’t kick his ass. It was one of the greatest bluffs I’ve ever seen. He really sold it and I really miss that guy already.” 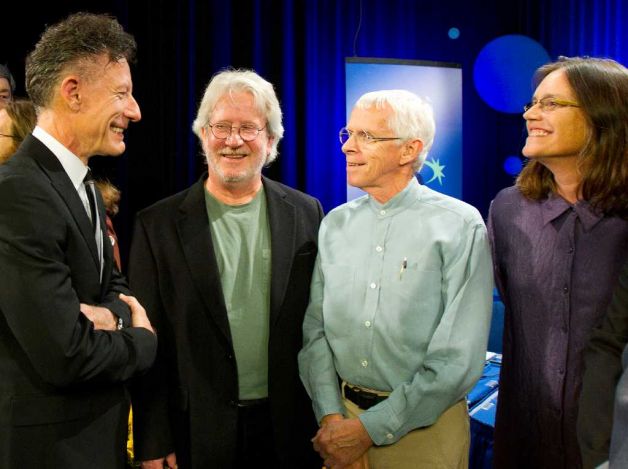 Lyle Lovett, Vince Bell, Don Sanders, and Denice Franke  at screening of For the Sake of the Song at Anderson Fair Reunion, KUHT-TV,  Houston, 2010.

Sanders was never retluctant when it came to collaborating with other local musicians and was very generous with his time and advice. He was known to work with the unlikeliest of Houston musicians on his recordings, and not surprisingly, these musical experiments always seemed to produce a positive outcome.

Don recorded with the late bluesman and guitar slinger, Rocky Hill, on his composition, “Heavy Word User,” that can be heard on his first self-titled, vinyl LP, Don Sanders, released in 1972. He also called upon the vocal talent of a budding Carolyn Wonderland to help accompany him on a soulful version of his composition, “Valery,” from his 1993 CD, Promisin’ Boy. However, it is his friendship with and mentorship of Klein, Texas native, Lyle Lovett, for which Sanders is best known.

Lovett referred to Sanders as ‘the grand old man of folk music in the Montrose area.’

The two first met at Texas A&M University in 1978 when Sanders was performing on campus and Lovett, a journalism major, was covering the concert for the school paper, The Battalion. In his article, Lovett referred to Sanders as “the grand old man of folk music in the Montrose area.” Bear in mind that at the time, Sanders was all of 35 years old.

Actually, Lovett’s statement was not that far from the real truth. At a neighborhood block party in 1975, in front of Anderson Fair Restaurant, Sanders was bestowed with the title of “Mayor of Montrose” by his peers and neighbors, and was even given the symbolic “mayoral shoes” to fill, in addition to the honorary political appointment.

Lovett expressed his gratitude to Sanders and repaid him in kind for his many years of advice and counseling when he recorded Sanders’ composition, “Bayou Song,” a topic that is near and dear to the hearts of every native Houstonian, on his 2009 CD, Natural Forces. The album also paid tribute to several of Lovett’s other songwriter friends and colleagues by including their compositions.

Even before the demise of Sand Mountain in 1976 that ended Don’s residency at the coffee house, the ubiquitous troubadour could be seen performing at many other Houston Downtown, Midtown, and Montrose songwriter and concert venues, including The Old Quarter, Liberty Hall, The Sweetheart of Texas, Prufrock’s, Corky’s, Theodore’s, Houlahan’s No. 2, and Anderson Fair. There were also performances at Austin’s Armadillo World Headquarters, several Montrose block parties, the Houston Heights Festival, and The Kerrville Folk Festival where Sanders was a member of Kerrville founder Rod Kennedy’s original advisory board. Sanders also performed frequently at benefits for progressive causes and social justice groups.

Sanders reinvented himself in 1992 as
‘The Sourdough Cowboy.’

After what seemed like a lifetime of endless one-nighters on the coffee house and college campus circuit, Sanders decided to reinvent himself and in 1992, created the minstrel persona of “The Sourdough Cowboy.” This new milieu allowed him to spend more quality time at home and with his family. The new creation also allowed Sanders to take his message and educational outreach to public schools by performing cowboy songs and telling tall Texas tales about the mythical Old West to young audiences of pre-K to 7th grade students. Performing in full cowboy regalia, Sanders’ new characterization was based on Depression-era, Works Progress Administration interviews with Texas Cowboys from the Library of Congress. 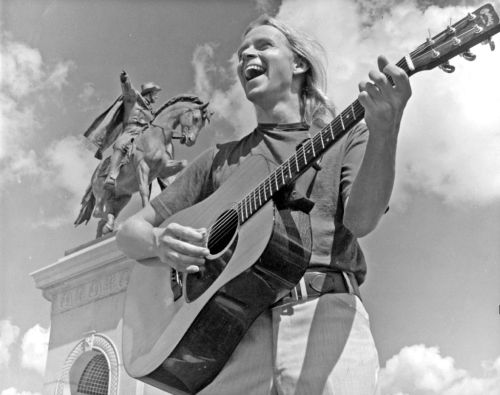 Labeled “The Dean of Houston Folk music,” by the late Bob Claypool, music critic of the now defunct Houston Post, Sanders carried the torch of the Houston tradition of the singer/songwriter throughout his lifetime, and then passed on the legacy to the next generation of performers. These individuals, who, like him, were all one-time Montrose residents and who just happened to, at one time, reside within spitting distance of one another. These friends and neighbors included Vince Bell, Eric Taylor, David Rodriguez, Lucinda Williams, Denice Franke, Reb Smith, and Shake Russell, to name just a few. Some of these performers are still with us today and unfortunately — some are not.

Don Sanders led a full and fruitful life. He is survived by a wife whom he adored and a son who made him proud. Don was a bright and shining force of energy whose memory will continue to burn in the hearts of all those who knew him. Sanders touched the lives of many in his lifetime through his humor and satire, his fellowship and camaraderie, his passion for life and most of all — his music.

[Ivan Koop Kuper is a freelance writer, real estate broker, and professional drummer, and has finally completed his graduate studies at the University of St. Thomas in Houston. Follow him on Twitter: @koopkuper.]