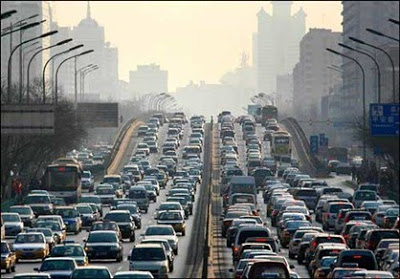 We may not be hung up in a Chilean copper mine or a Chinese traffic jam, but we’re stuck just the same in our own intractable dilemmas…

Today is sunny and warm where I happen to be, with a light breeze, perfect for riding bikes with the dogs, enjoying a cool swim and eating lunch outside under the trees.

But for 33 Chilean miners trapped more than 2,000 feet below the earth’s surface since August 5, it’s been 50-odd days since they’ve seen sunlight or taken a breath of fresh air. Alive and uninjured, they can now communicate with their families and get food. But they are trapped.

Rescuers say it may be Christmas — three more months — before they can drill a hole wide enough to pull the men one by one up to the surface. Three simultaneous drilling operations are under way, attempting to rescue the miners sooner. Some of them appear emotional on camera, irritable and rebellious. When their request for wine was refused, the miners complained. Some are reportedly riding mining machinery “recklessly” in the tunnels. It’s hard to blame them.

Not long after falling rock trapped the miners in Chile, motorists heading into Beijing on a major highway from Inner Mongolia became snarled in a monster traffic jam that lasted 10 days and stretched 60 miles. Truckers hauling coal from Mongolia crowd the G110 Highway because it has no coal checkpoints. So they don’t need to bribe inspectors to ignore their illegal loads.

A few accidents and breakdowns helped create the longest traffic jam ever (so far). The trapped truckers had to pay roadside entrepreneurs nasty marked-up prices for their survival staples of noodles, cigarettes, and amphetamines, a capitalist coup. Anyone who has ever spent a motionless hour in commuter traffic can only sympathize with the horror of a 10-day stall.

Before you shake your head and say, too bad for them, at least it’s not us… Wait. We may not be hung up in a Chilean copper mine or a Chinese traffic jam, but we’re stuck just the same in our own intractable dilemmas, like Iraq and Afghanistan.

President Obama claims the 50,000 U.S. soldiers still on the ground in Iraq are “non-combat” troops. But that only proves we’re still stuck with public officials who will say anything, true or not, despite the rhetoric of “hope” and “change.” Mission accomplished again? Same mission, equally accomplished.

Every occupation of Afghanistan has failed, but the U.S. feels exempt from history. Exceptional. We’ve been there nine years already with no end in sight. Since we lack any defined goals, we have no idea what “victory” in Afghanistan might look like. So year after year we kill more Afghan civilians and sacrifice more American soldiers for… what, exactly?

We are stuck with a militaristic foreign policy. We pursue global military dominance as our tattered social safety nets fail to relieve the desperate conditions millions of our citizens must now endure. We are stuck with an unworkable capitalist model.

But the tiny percentage of the ultra-wealthy who control our media and our government like it this way. They’re doing better despite the widespread suffering. To consider another economic system is Unimaginable! Un-American! Our dysfunctional “freedom from government” is tops in the world. No?

Nobody — rich or poor — wants to pay taxes for public services that are deteriorating and disappearing. Our roads are bad. Our schools are worse. Our libraries and police departments are underfunded. Occasional acts of billionaire noblesse oblige — Zuckerberg donates to Newark! Gates pledges billions against AIDS! — make headlines and substitute for sustainable public policy planning. California spends more for prisons than for education. That’s criminal.

The State of Virginia recently executed a retarded woman, though hundreds of studies show the death penalty does not deter capital crime. On the contrary, state-sanctioned murder only adds to the climate of violence in our country. But God help anyone (except He won’t!) who dares challenge the right of citizens to carry concealed assault weapons in church.

No mass rebellion is likely. We are too wired up to act. Oldies watch the CBS Evening News. Kids are plugged into Play Station. Everyone in between is attached to their Blackberries, iPhones, and myriad digital doodads. Recent research shows that unless you unhook from your techno-fix sometimes you cannot process the information you’re receiving. We are too addicted to our gizmos to understand or evaluate what we know.

Even adults like to believe there must be some responsible person somewhere who can clear up traffic jams, rescue lost miners or attend in a rational way to the disappearing American middle class. But as our shrill, primitive political rhetoric demonstrates, nobody wants to be the grownup in America. Public officials and political players prefer to point fingers and call each other names than to grapple with problems in an honest, pragmatic way.

That’s much easier of course, though utterly unhelpful. Coming unglued will not help us get unstuck. If our species goes the way of the dinosaurs it will be because we failed to grow up. Christine O’Donnell may be right about evolution after all.

None of our problems is inevitable. But we show no sign of gearing up to liberate ourselves from any of them. Instead we double down, hoping to grab what we can before the whole show folds, which all but guarantees that fold it will.

Our fate resembles that of the trapped Chilean miners, forced to endure a long, excruciating survey of their potential demise. Is this our grave we see before us? Except no one is coming to save us. It’s up to us.

So if you feel moved to pray for those trapped miners, you might also spare a few words for the rest of us.

[James McEnteer is the author of two books about Texas, including Deep in the Heart: the Texas Tendency in American Politics (Praeger 2004). Formerly of Austin, he now lives in South Africa.]