James McEnteer :
Why Ecuador is choosing to sabotage its
top universities

Above all, it is a move by Ecuador’s President Rafael Correa to consolidate his power. 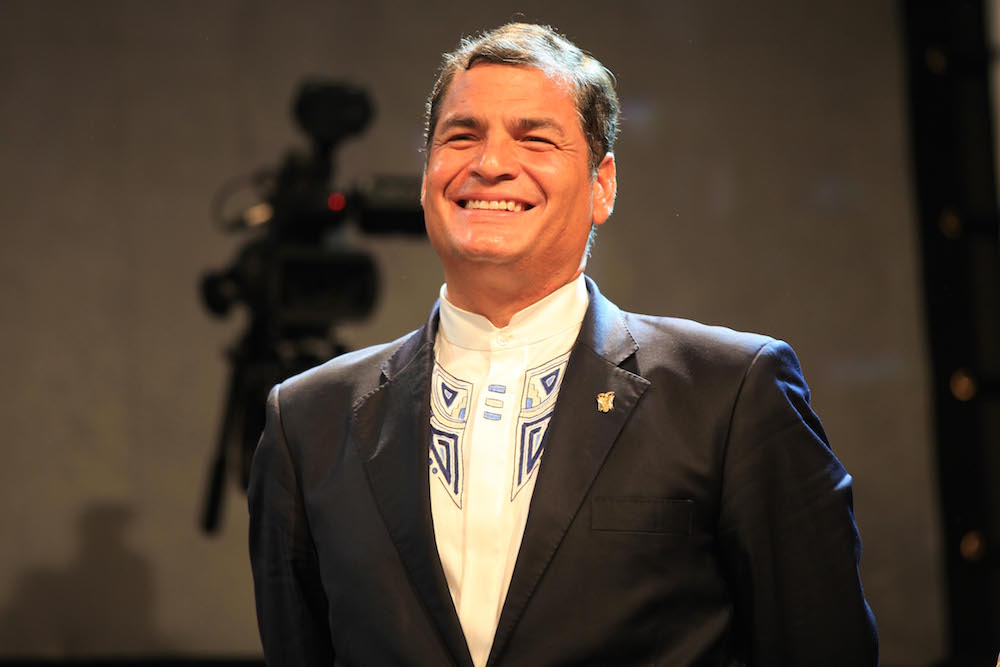 QUITO, Ecuador — On December 13, Ecuador’s National Assembly passed a law compromising the independence of its public universities. The mandate, in this small country, where everything is personal, is aimed specifically at the two institutions of higher learning that offer only post-graduate degrees: Andina University and the Latin American Faculty of Social Sciences, aka FLACSO.

The new law relieves those universities of critical financial decisions, ceding that power to the National Secretariat of Higher Education, Science and Technology. Instead of university faculty and administrators choosing how best to deploy funds for research and allocate student aid, those decisions will be left to ministry bureaucrats.

This anti-democratic stealth edict, passed with no public discussion and inserted as articles into an unrelated law, is a recipe for misbegotten political correctness and intellectual mediocrity. Though the Correa government has made huge investments in higher education, this law is only its most recent regulation aimed at controlling those investments by disabling university autonomy. Above all, it is a move by Ecuador’s President Rafael Correa to consolidate his power.

FLACSO was founded in the mid-1950s by UNESCO as a consortium of post-graduate universities in 17 Latin American and Caribbean countries. FLACSO’s Ecuador campus seeks to produce rigorous social science research to promote justice, equality, and social inclusion. The university’s diverse faculty hold doctorates from U.S., European, and Latin American institutions. They sponsor internationally-attended conferences and deploy their scholarship funds to promote diversity among their students from many countries in and beyond Latin America.

Andina University, founded in 1985, is also part of a consortium of institutions of higher learning throughout the Andean region. Ecuador’s branch of the Universidad Andina group was founded and led for 15 years by Enrique Ayala, a fierce advocate for academic freedom, who fought to keep his institution’s policies autonomous from government control. Ayala’s recent retirement may have emboldened Rafael Correa to make his move.

The very international connections and prestige of these two post-graduate universities are precisely what bothers Correa. Independent scholars at these institutions can be critical of government policies. And Rafael Correa finds any such disagreement intolerable. Correa, who holds a doctorate in economics from the University of Illinois, and who once taught economics at a university in Quito, has clearly shown that he cannot abide any criticism of himself or his policies.

He has had peaceful protestors arrested
for ‘sabotage and terrorism.’

When physicians held a press conference to take issue with new health care regulations handed down by Correa’s Ministry of Health, the President of the Republic called them “rock throwers.” He has had peaceful protestors and students attending demonstrations arrested for “sabotage and terrorism.” In his Saturday marathon monologues, broadcast on radio and television, he names dissidents — often journalists — by name, as “enemies of the citizen’s revolution,” as he styles his agenda. This finger-pointing can cause levels of discomfort ranging from harassment to job loss to personal danger for those whom Correa singles out.

Correa’s political party — the PAIS Alliance — controls the National Assembly, which passed the new law, as well as the courts. Unless the president vetoes the new law, it will stand as public policy. Correa, in his tenth year as president, nearing the end of his third term, has announced that he will not run for a fourth term in 2017. But he is moving aggressively to consolidate his power before he leaves.

Not coincidentally he has just now sent Ecuador’s armed forces into the territory of the indigenous Shuar people to quell protests there. The Shuar are trying to fend off a Chinese copper mining operation on their nationally-recognized lands, which Correa, as part of a new constitution he sponsored when he first came to power, pledged to protect. That constitution promised to honor pachamama, the indigenous designation of Mother Earth. But Correa has sold off a third of the Ecuadorean Amazon to the Chinese for oil drilling.

Correa’s government is also moving at this moment to shut down the environmental watchdog organization, Accion Ecologica, which has been highly critical of his policies for years. Over his three presidential terms, Correa’s administration has closed many organizations that publicly disagree with state policies, including Fundación Pachamama, another organization that defends environmental rights, and the National Union of Educators, along with several media organizations he has driven out of business.

With presidential elections set for February 2017, Correa wants to leave office confounding and silencing his most powerful and internationally respected critics once and for all.

International pressure may not be enough to stop the Correa government from sacrificing the intellectual independence of his country’s premiere universities to bureaucratic political control. But nothing else stands in his way.