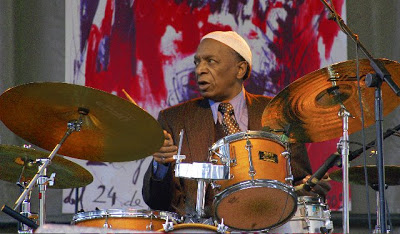 Bobby was always a quiet drummer, exquisite taste and touch, a polished gentleman with international reputation.

Doubt you would find him at Grand Auto or buying the first shirt he ran across while shopping.

Bobby Durham, a drummer whose precise, understated style made him much sought after as a sideman by jazz greats like Duke Ellington, Lionel Hampton, Oscar Peterson and Ella Fitzgerald, died Monday in Genoa, Italy. He was 71 and had homes near Genoa and Basel, Switzerland.

The cause was lung cancer, said Sandra Fuller, a friend.

Mr. Durham was probably best known for his trio work, from 1966 to 1971, with Peterson at the piano and Ray Brown playing bass. He also drew significant notice from 1973 to 1980 as an accompanist to Fitzgerald.

“One of his specialties was brushes,” said Dan Morgenstern, director of the Institute of Jazz Studies at Rutgers University, referring to soft-stroke wire drumsticks.

“It’s important when you work with a singer that you play sensitively, that you don’t overwhelm,” Mr. Morgenstern said.

Mr. Morgenstern’s assessment echoed one in 1980 by John S. Wilson, writing in The New York Times about Mr. Durham’s performance with the organist Shirley Scott and the tenor saxophonist Harold Vick.

“He steps forward occasionally with brief, rollicking statements that add sparkle to the group, and he feeds crisp breaks to Mr. Vick,” Mr. Wilson added. “When he finally takes a solo, he builds a steady, controlled development that never gives way to gratuitous flashiness.”

Besides playing with jazz greats like Hampton, in 1962, and Ellington, in 1966, Mr. Durham made recordings with, among others, the trumpeters Dizzy Gillespie and Roy Eldridge, the pianist Tommy Flanagan, the guitarist Joe Pass and the alto saxophonist Benny Carter.

One of Mr. Durham’s specialties, with brush sticks softly in play, was scat singing.

Robert Joseph Durham was born in Philadelphia on Feb. 3, 1937. His father was a professional tap dancer, and Bobby was taught to tap at the age of 2. He started playing drums with his junior high school band; by 16 he was playing professionally with a group called the Orioles. His next big gig was with a Marine Corps band, from 1956 to 1959.

Leading his own trio, Mr. Durham performed all over the world. “I played everywhere but Russia, Alaska and Arabia,” he said in a profile in the Biographical Encyclopedia of Jazz.

Mr. Durham’s wife, the former Betsy Perkins, died in 1996. He is survived by two daughters, Valarie Ahrar of Philadelphia and Robbin Carver of Woodbury, N.J.; and four grandchildren.

This entry was posted in RagBlog and tagged Deaths, Jazz, Music, Musicians. Bookmark the permalink.