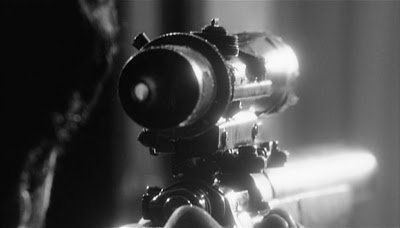 Image from Assassins / IMFDB.
Due process and special ops:
Assassinations, anyone?

Every American citizen has heard the legal phrase “due process of law,” but do you really know what that means?

The Fifth Amendment of the U.S. Constitution states:

No person shall be held to answer for a capital, or otherwise infamous crime, unless on a presentment or indictment of a Grand Jury, except in cases arising in the land or naval forces, or in the Militia, when in actual service in time of War or public danger; nor shall any person be subject for the same to be twice put in jeopardy of life or limb; nor shall be compelled in any criminal case to be a witness against himself, nor be deprived of life, liberty, or property, without due process of law; nor shall private property be taken for public use, without just compensation.

The Fifth Amendment’s Due Process Clause has two aspects: procedural and substantive. Procedural due process is concerned with the process by which legal proceedings are conducted. It requires that all persons who will be materially affected by a legal proceeding receive notice of its time, place, and subject matter so that they will have an adequate opportunity to prepare. It also requires that legal proceedings be conducted in a fair manner by an impartial judge who will allow the interested parties to present fully their complaints, grievances, and defenses. The Due Process Clause governs civil, criminal, and administrative proceedings from the pretrial stage through final appeal, and proceedings that produce arbitrary or capricious results will be overturned as unconstitutional.

It surfaced earlier this year that our President (a former constitutional professor of law and senior lecturer at the University of Chicago) is now authorizing, without Congressional consent, and against constitutional authority, assassinations of U.S. citizens abroad. Dana Priest in the Washington Post reported:

As part of the operations, Obama approved a Dec. 24 (2009) strike against a compound where a U.S. citizen, Anwar al-Aulaqi, was thought to be meeting with other regional al-Qaeda leaders. Although he was not the focus of the strike and was not killed, he has since been added to a shortlist of U.S. citizens specifically targeted for killing or capture by the JSOC, military officials said…

The Obama administration has adopted the same stance. If a U.S. citizen joins al-Qaeda, “it doesn’t really change anything from the standpoint of whether we can target them,” a senior administration official said. “They are then part of the enemy.

Both the CIA and the Joint Special Operations Command (JSOC) maintain lists of individuals, called “High Value Targets” and “High Value Individuals,” whom they seek to kill or capture. The JSOC list includes three Americans, including Aulaqi, whose name was added late last year.

Interestingly, during George W. Bush’s reign, there was intense and heated debated over the indefinite detention and torture of “high value individuals” at Black Ops sites across the world (Bagram Air Force Base, Syria, Egypt, etc.). Even Obama criticized the Bush administration during the presidential race and then promised to close Guantanamo after taking office. This has not happened and most likely never will, even though intelligence shows that Guantanamo remains a recruiting tool, used by extremists around the world.

There have been a number of reports that show the complete innocence of these accused “terrorists” whether U.S. citizens or not:

“There are still innocent people there (Guantanamo),” Lawrence B. Wilkerson, a Republican who was chief of staff to then-Secretary of State Colin Powell, told The Associated Press. “Some have been there six or seven years…” Wilkerson told the AP in a telephone interview that many detainees “clearly had no connection to al-Qaida and the Taliban and were in the wrong place at the wrong time. Pakistanis turned many over for $5,000 a head.”

Just think about this for a minute. Barack Obama, like George Bush before him, has claimed the authority to order American citizens murdered based solely on the unverified, uncharged, unchecked claim that they are associated with Terrorism and pose “a continuing and imminent threat to U.S. persons and interests.” They’re entitled to no charges, no trial, no ability to contest the accusations… That’s why we have what are called “trials” — or at least some process — before we assume that government accusations are true and then mete out punishment accordingly.

But now, there seems to be little or no discussion over the assassination of U.S. citizens for their alleged ties to “terrorist organizations.”

The only recent outcry has been from Rep. Dennis Kucinich (D-OH) who introduced a bill (HR 6010) titled: “To prohibit the extrajudicial killing of United States citizens, and for other purposes.”

So the Joint Special Operations Command (JSOC) along with the CIA seems to be carrying out these “extrajudicial” (outside of the law) assassinations all over the world.

Who or what is JSOC?

In March 2009, investigative reporter Seymour Hersh described JSOC as “a special wing of our special operations community that is set up independently… They do not report to anybody, except in the Bush-Cheney days, they reported directly to the Cheney office… Congress has no oversight of it.

A few months later, when it was reported that General Stanley McChrystal would be taking over command of U.S. forces in Afghanistan, journalist Gareth Porter noted that McChrystal had been commander of JSOC from April 2003 to August 2008 and commented that his “long specialisation in counter-terrorism operations suggests an officer who is likely to have more interest in targeted killings than in the kind of politically sensitive counterinsurgency programmes that the Obama administration has said it intends to carry out.”

So JSOC is the assassination squad for U.S. citizens or other “high value targets” of interest.

But does the United States train others to do assassinations by proxy? In other words, do the dirty work of eliminating leaders, politicians, social movements or others that are in direct conflict with our “national interest” or “sphere of influence.”

The Western Hemisphere Institute for Security Cooperation (WHINSEC) (formerly known as the School of the Americas (“SOA”), is a United States Department of Defense facility at Ft. Benning, Georgia. This benign sounding “school” or “institute,” established in 1946, has been responsible for training more than 61,000 Latin American soldiers and policemen who have been responsible for some of the most heinous human rights abuses in the 20th century.

From 1946-2001, such infamous dictators (that the U.S. propped up and supported) as Manuel Noriega (Panama) and Augusto Pinochet (Chile) and many others had soldiers and police trained at the SOA. The brutal tactics of “counterinsurgency” taught at the SOA included torture, indefinite detention and extrajudicial killings.

“The U.S. Army School of the Americas (SOA) used training materials that condoned executions of guerillas, extortion, physical abuse, coercion, and false imprisonment” asserts an Intelligence Oversight Board (IOB) Report issued June 28, 1996, in Washington, DC. The IOB, a four-person, independent board created three years ago(1993) by President Clinton, is charged with investigating excesses and abuses by the US intelligence community.

The term “death squads” is closely associated with the training received at the SOA. Many of the countries (Chile, Bolivia, etc.) that formerly sent soldiers for training, now have refused this offer from the United States.

To counter the operations at WHINSEC (the new and “improved” name as of 2001), the “School of Americas Watch” was founded by Mary Knoll Father Roy Bourgeois and a small group of supporters in 1990 to protest the training of mainly Latin American military officers at the School of Americas. Most notably, SOA Watch conducts a vigil each November at the site of the academy, located on the grounds of Fort Benning, a U.S. Army military base near Columbus, Georgia, in protest over myriad human rights abuses committed by graduates of the academy.

So are “extrajudicial” killings (code for assassinations) OK with the American people? Most would most likely answer “NO,” but what can you do to stop these abuses by the U.S. government?

A first step is to call or email your congressional representative and insist that they support Rep. Kucinich’s bill (HR 6010) to stop “extrajudicial” killings of U.S. citizens.

The law of war does not allow proclaiming either an individual belonging to the hostile army, or a citizen, or a subject of the hostile government, an outlaw, who may be slain without trial by any captor, any more than the modern law of peace allows such intentional outlawry; on the contrary, it abhors such outrage. The sternest retaliation should follow the murder committed in consequence of such proclamation, made by whatever authority. Civilized nations look with horror upon offers of rewards for the assassination of enemies as relapses into barbarism.

4 Responses to Jim Turpin : Assassinations, Anyone?