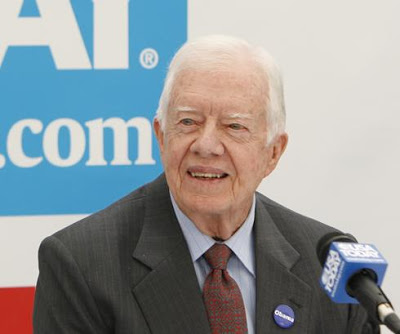 DENVER — Former president Jimmy Carter called Republican presidential candidate John McCain a “distinguished naval officer,” but he said the Arizona senator has been “milking every possible drop of advantage” from his time served as a prisoner of war in Vietnam.

Carter spoke Thursday with USA TODAY and Gannett News Service reporters before Barack Obama’s acceptance speech to cap off the Democratic National Convention. Carter spoke of Obama’s challenges facing the lingering effects of racism in the United States and the ability of the Clintons to bring their supporters over to Obama. He decried Connecticut Sen. Joe Lieberman’s decision to “abandon” the Democrats by speaking at the Republican convention next week.

Carter, however, focused heavily on McCain. He said he was bewildered by McCain’s performance at the Saddleback Presidential Forum hosted by pastor and author Rick Warren in Lake Forest, Calif., earlier this month.

Carter said that whether he was asked about religion, domestic or foreign affairs, every answer came back to McCain’s 5½ years as a POW.

“John McCain was able to weave in his experience in a Vietnam prison camp, no matter what the question was,” Carter said. “It’s much better than talking about how he’s changed his total character between being a senator, a kind of a maverick … and his acquiescence in the last few months with every kind of lobbyist pressure that the right-wing Republicans have presented.”

Carter said Lieberman, Al Gore’s running mate in 2000 and now an independent, had cast his lot with the GOP by deciding to speak at the party’s convention.

Lieberman switched his party registration after losing the 2006 Democratic senatorial primary to Ned Lamont, who made opposition to the Iraq war central to his campaign. Lieberman kept his seat and has helped Democrats maintain a 51-49 voting edge.

“I would hope that the Democrats could have enough senators elected in November so that we would not any longer need to include Joe Lieberman among the senators,” Carter said.

Carter called Hillary Rodham Clinton’s speech at the convention Tuesday “superb” but questioned her for pointing out her accomplishments in some areas and merely saying that Obama shared those concerns.

Carter cited a USA TODAY/Gallup Poll last week that found 47% of Clinton supporters said they were solidly behind Obama and 30% said they would vote for McCain, someone else or no one at all. “I think that this week has eliminated that disparity,” he said.

Carter also spoke of the segregation he saw growing up and said racism is “always a subtle factor” in American politics. He called this November’s election possibly the most “momentous, important” U.S. election in the past 100 years, and he was confident that Obama could overcome the racial divide.

But he said race could ultimately be the deciding factor.

This entry was posted in RagBlog and tagged Jimmy Carter, McCain, Presidential Campaign. Bookmark the permalink.