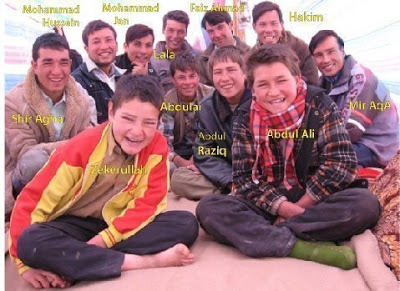 The Afghan Youth Peace Volunteers in Bamiyam Province. Photo from Joan Wile / The Rag Blog.
Afghan kids to U.S. grannies:
‘Tell your government to stop
bombing and killing our people’

A remarkable Skype conference was held Tuesday, November 9, at which three New York City peace grannies and a California high school peace class spoke at length with seven members of the Afghan Youth Peace Conference (AYPC) in a mutual desire to end the war in Afghanistan.

The conference meant so much to the Afghan kids that they came from distant valleys and stayed overnight in a mud house in order to participate.

For over an hour, the grannies, the U.S. students, and Afghan youthful peacemakers all exchanged ideas and expressions of solidarity and affection in what they hope will be a step toward ending the unjustified hostilities in that besieged country.

The seven Afghan kids spoke over and over of their desire for Americans to recognize that they are human beings just like us; they spoke of the losses they have suffered because of the war and their fervent wish for it to end. “Tell your government to stop bombing and killing our people,” pleaded one of the boys.

The grandmothers were extremely impressed with the intelligence and grasp of issues demonstrated by the youngsters. Two of the grannies, Miriam Poser and Barbara Walker, told the kids they would like to visit them in their small village in the Bamiyam province 100 miles northwest of Kabul, and are now making plans to go in April of 2011 “with bags of healthy treats and all kinds of school supplies.”

A member of New York City’s Grandmothers Against the War conceived the idea of “adopting” the Afghan youths after reading a stirring article on an online blog written by members of Voices for Creative Nonviolence (VFCV) who had spent a week with them.

She contacted as many peace associates as she could find and got an overwhelmingly positive response of support from people and groups as diverse as the Atlanta Grandmothers for Peace and the New York City chapter of the Gray Panthers, plus many individuals such as Gold Star Families activist Dede Miller and her sister, Peace Mom Cindy Sheehan; Lorraine Krofchok, President of Grandmothers for Peace International; Barbara Harris of the Granny Peace Brigade, and so many more. 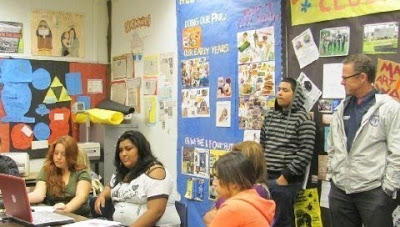 Kids from the peace club atTracy High School, Cerritos, California, during Skype conference with Afghan Youth Peace Volunteers Nov. 9, 2010. Photo from Joan Wile / The Rag Blog.
Dede Miller suggested organizing for a Peace Summit through Skype between the Afghan kids and U.S. high school peace groups and arranged for the peace club of Tracy High School in Cerritos, led by teacher and Military Families Speak Out member, Pat Alviso, to join in the dialogue.

One Afghan kid made the startling statement, “Please tell them (the U.S. government) to stop sending money to our country” in answer to a California student’s question, “What should our governments do to bring about peace?” The Afghan boy explained that he had heard of widespread corruption and the result that money never reaches its target, the people in need, but instead is gobbled up by the powerful and rich.

He urged instead that we reach out with their message of peace. The children never asked for any material aid, partly because they are skeptical about their postal service, but mostly out of the purity and urgency of their desire to stop the conflict raging around them. The grandmothers promised to reach out in every way possible, and one of the California students said, “We’ll do our best to open the eyes of America.”

Their admirable leader, Hakim, a young doctor from Singapore who has been mentoring the Afghan group for several years and who acted as interpreter for the Skype meeting, stated that they don’t believe either government is listening to the people’s voices and we must change that. We grannies and our Tracy High School compatriots ardently hope that we can in some small measure be an effective part of that change.

[Joan Wile is the author of Grandmothers Against the War: Getting Off Our Fannies and Standing Up for Peace (Citadel Press, May, 2008). Anyone interested in lending support to this project, even if only to endorse it, contact Joan at joanwile@grandmothersagainstthewar.org.]

This entry was posted in Rag Bloggers and tagged Afghanistan, Grandmothers Against the War, Joan Wile, Peace Movement. Bookmark the permalink.