Posted on September 8, 2020 by Thorne Dreyer 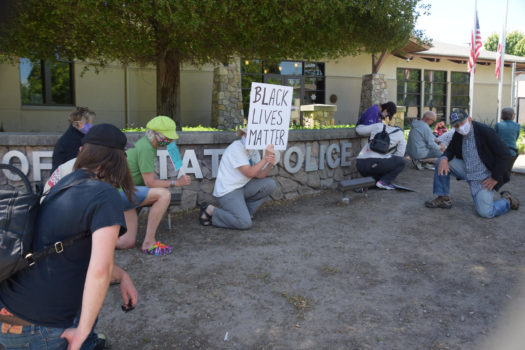 The author, on the far right, takes a knee outside the police station in the town of Cotati, California, where he lives, earlier this year. Photo by Karen Preuss.

Watching the TV news from Kenosha has given me the opportunity to look back at my own life as a kind of antifa activist in the late 1960s.

On December 9, 1969, a month or so before my 28th birthday, I went into the streets of Manhattan with other members of ”the Mad Dogs,” a small group of New York radicals, to protest the murders, five days earlier, of Fred Hampton and Mark Clark, two Black Panthers who were shot and killed during a predawn raid at their Chicago apartment that was carried out by a tactical unit of the Cook County State’s Attorney’s Office in conjunction with the Chicago Police Department and the FBI.

By December 1969, I had been an activist and an organizer for a decade, protesting against the House Un-American Activities Committee (HUAC), nuclear testing and the policies and attitudes of the administration at Columbia College, where I was a student, that treated us as children. The New York City “Red Squad” started a file on me in 1962.

I used a lead pipe, which I found in the gutter, to break six plate glass windows at Sax Fifth Avenue.

On the night of December 9, I used a lead pipe, which I found in the gutter, to break six plate glass windows at Sax Fifth Avenue, an upscale department store. I broke another plate glass window at the office of an airline around the corner. I was not the only one throwing rocks and carrying a lead pipe. There were at least a thousand of us in the streets of midtown Manhattan, drawn there in part because of the murder of the two Panthers, and also because President Nixon was at the Waldorf Astoria receiving an award from the National Football League (NFL). All around me I could hear the sounds of breaking glass.

I think I understand how antifa members feel today. I would say to them “been there, done that.” I would tell them that I believe in peaceful protest and that I have “taken a knee,” along with others in the small California town where I now live. I plan to go on exercising my First Amendment rights, which include freedom of speech and the press and the right to demonstrate peacefully and call upon the government for a redress of grievances.

Rioting and “trashing” as it was called, in the streets of New York in 1969 didn’t stop police violence and brutality. Nor did it end the war in Vietnam, which soon expanded to include Laos and Cambodia and that swelled the antiwar movement across the country. If someone had told me in 1969 that my efforts would be futile, I would not have believed them. I was cocooned in my own head. I thought I was some kind of existential change agent. Too much reading of Sartre and Che.

I was beaten for hours and charged with attempted murder of a police officer.

By the spring of 1970s, I was slowly beginning to become a convert to nonviolent civil disobedience. In a way, I had learned my lesson on December 9, 1969. Not only was I arrested and charged with attempted murder of a police officer, but I was also clubbed on the street, my head fractured, and taken to several police precincts in Manhattan, including the 19th, where I was beaten for hours, handcuffed behind my back, facing the wall so I could not see any of the faces of the officers involved. They knew precisely what they were doing.

Early in the morning of December 10, I was tossed in a cell, black and blue and bloody. Later that day I was arraigned in a courtroom at 100 Center Street and released on bail. The whole incident made The New York Times and The Village Voice. My colleagues at the State University of New York at Stony Brook, including Alfred Kazin and John Thompson, signed a petition condemning the police beating that I received. My lawyer, Paul Chevigny of the American Civil Liberties Union (ACLU) filed a suit on my behalf against the New York City Police Department. We dropped the suit when the police offered to drop the charge of attempted murder against me.

It can be relatively easy to become intoxicated by the rhetoric of revolution.

I understand the allure of violent revolution. I remember the sound of breaking glass and the euphoric feelings I had when I “trashed” those six windows at Saks Fifth Avenue. But I also know now that we weren’t in a revolutionary moment in 1969 and that we aren’t in a revolutionary moment in 2020, though I have heard many friends insist that we are. It can be relatively easy to become intoxicated by the rhetoric of revolution. It’s dangerous stuff. One had better use it with care or it will blow up in your face.

Yes, for a few months after December 9, 1969 I was a hero of the Left. Some friends still remember the occasion and tell me that I was a revolutionary. I know better. I don’t know anyone in antifa, and I’m not sure I would be able to talk any members of the organization out of their beliefs and actions. Maybe they will wake up. Some of them will go to prison. Others will probably be shot and killed and be viewed as martyrs to the cause.

Thank you, Kenosha, for reminding me to continue to believe in democracy and in the power of civil disobedience in the streets.

1 Response to JONAH RASKIN :
ACTIVISM | Thank you, Kenosha: A cry for civil disobedience