Jonah Raskin :
BOOKS | ‘Set the Night on Fire: L.A. in the Sixties’ 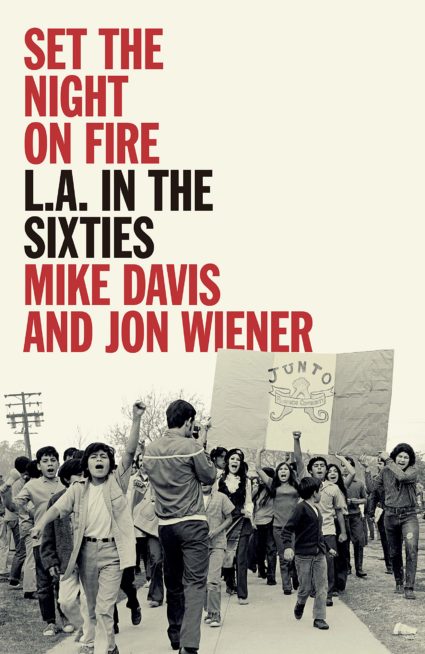 SONOMA COUNTY, Cal. — To really get the most from this huge history about the City of the Angels in the 1960s, it helps to have been a member of Students for a Democratic Society (SDS), and a part of the New Left, which reinvented American radicalism and redefined political protest in an era when the U.S. empire seemed to be on the ropes at home and overseas.

Mike Davis and Jon Wiener, the two authors of Set the Night on Fire (Verso; $34.95) were both SDS members and stellar SDS organizers. Their two-page-long biographies at the back of the book offer in detail the kind of information that would have helped J. Edgar Hoover get his rocks off in 1965.

Davis says that he burned his draft card, and that with two other SDS members, Margaret Thorpe and Patty Lee Parmalee, he raised hell on L.A. college campuses. Wiener says that he helped organize Princeton SDS, brought Tom Hayden to campus and wrote for New Left Notes and Liberation News Service.

At the end of his profile, Wiener adds that while he and Davis met in the late 1960s, they didn’t become friends for more than a decade. “He was intense, eloquent and a little intimidating,’ Wiener adds. Davis is still a bit intimidating at least in the many books he has written which have won him the epithet, “The master of disaster.”

Set the Night on Fire doesn’t explore the kinds of global disasters, including pandemics, and the ongoing environmental apocalypse, that have helped make Davis famous.

The authors see a recurring pattern in L.A. movement history. Oppression breeds a succession of political groups, organizations, and individuals who nudge history, then fade away, or are destroyed by the LAPD or FBI programs like COINTELPRO, which wreaked havoc with white and black radicals. Then the wheel turns, new groups, organizations, and leaders come along and the movement recreates itself.

Davis suggests that the circle of rebellion
will be unbroken.

Davis suggests that the descendants of 1960s protesters will carry on the insurrectionary traditions of the past and that the circle of rebellion will be unbroken.

Halfway through the book the authors explain that, “Revolts are often detonated by events that initially seem to be small.” That’s true. Sparks sometimes light prairie fires and small things make a big difference. Still, the comment is unnecessary after several hundred pages devoted to revolts in L.A.

If the book aims to fan new sparks of rebellion and set nights on fire again, metaphorically if not literally, it also aims to show that L.A. was in many ways the epicenter of 1960s rebellion, and that sometimes things happened there first and later caught on around the country. The book can be rather preachy about the uniqueness of L.A., though the authors also show that what was happening in L.A. was also happening elsewhere. It was unique and it was similar.

Still, not surprisingly, L.A. in 1968 wasn’t as fiery as Prague and Paris in 1968. It was too intensely policed, the left was too fragmented, and the city dissected by freeways that kept poor people segregated.

This book can be playful, confrontational, analytical and reverential.

Like SDS itself, this book can be playful, confrontational, analytical and reverential. Unlike SDS at the end when it imploded, it tries to be balanced. So Eldridge Cleaver is described as a “loose cannon” and also as “heroic.” Davis and Wiener honor the Black Panthers; they also write about the organization’s “heavy rhetorical artillery” which ran parallel to real guns and bullets.

The section on Ron Karenga and his group, “US,” reads like the stuff of cloak and dagger and the discussion of “pussy power” makes more sense than any other discussion of the term and the idea behind it which was as old as Aristophanes’ play Lysistrata from ancient Greece.

Barbara Ehrenreich calls Set the Night, “history from below.” Indeed, it describes grassroots organizations, neighborhood groups, and kids from the ‘hoods who staged “Blowouts” to define and defend their turf.

They also write about L.A.’s top cops, its mayors, and U.S. Presidents like LBJ.

Davis and Wiener don’t just inhabit the lower depths of L.A. They also write about L.A.’s top cops, its mayors, and venturing far afield, U.S. Presidents like LBJ who is depicted as a “Texas gambler.”

There are chapters about gays, lesbians, Chicanos, women’s liberation, and the underground press. Even Hollywood actors such as Jean Seberg and screenwriters like Budd Schulberg make cameo appearances. I would have liked more about the movie industry and the Sixties and much more about women’s groups, but at 788-pages the book is already too long.

The Latin American author, Eduardo Galeano, once said, “Sometimes less is more.” Davis and Wiener don’t seem to appreciate that point of view, at least not in this book, which cries out to be read as a textbook about a time when the City of Angels looked and behaved like a city of devils and dreamers, racists and rebels, SDS members and Black Panthers who looked at one another and saw comrades and brothers and sisters. Every city in the U.S. ought to have a book as lovingly written as this one about L.A. Perhaps it will inspire young historians from New Orleans to Detroit and Seattle.

4 Responses to Jonah Raskin :
BOOKS | ‘Set the Night on Fire: L.A. in the Sixties’