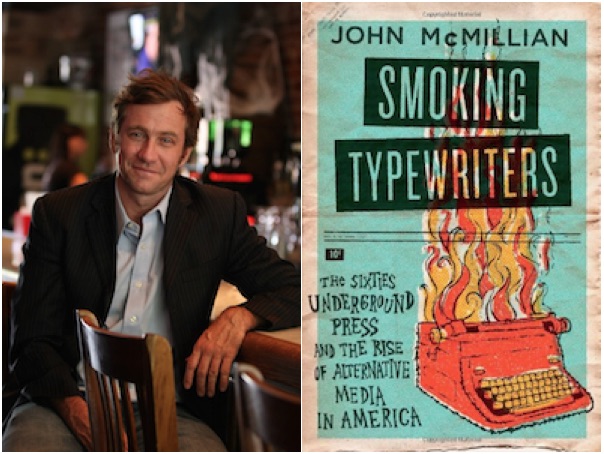 Historian John McMillian and his Oxford Press book about the Underground Press of the ’60s.

An associate professor of history at Georgia State University in Atlanta, with degrees from Harvard and Columbia, John Campbell McMillan is the author of the best book about the underground press. Smoking Typewriters: The Sixties Underground Press and the Rise of Alternative Media in America (Oxford University Press) looks at the past though the lens of the present and the present though the lens of the past.

Written with real elegance and a keen appreciation of rebel journalists and reporters, McMillan’s book has appealed to both students and teachers and elicited praise from Tom Hayden, Susan Brownmiller — the author of a distinguished memoir about the Sixties — and Todd Gitlin, the author of the classic, The Sixties: Years of Hope, Days of Rage.

This spring, Columbia University hosts a series of events to commemorate, memorialize and perhaps even abuse 1968. Fittingly, Professor McMillan kicked off the series with a talk titled “The Sixties Underground Press and the Rise of Alternative Media in America.” The festivities at Columbia culminate April 27-28, with the return to campus of former student rebels including Mark Rudd. The following interview with McMillan was conducted by email just as he was preparing his talk.

“[The Rag was] a spirited, quirky, and humorous paper, whose founders pushed the New Left’s political agenda even as they embraced the counterculture’s zeal for rock music, psychedelics, and personal liberation… [By] championing New Left values, challenging local officials and the mainstream media with bravado, and blossoming into the most visible representation of Austin’s oppositional culture, the Rag… put down roots in a community that came to regard it as a beautiful and precious thing.” — John McMillian, Smoking Typewriters

Jonah Raskin: Has it struck you that the phrase the “underground press” was a misnomer since the newspapers weren’t produced, published, and distributed clandestinely?

John McMillian: Yes, the “underground press” was a bit of a misnomer. The overwhelming majority of “underground newspapers” sold openly, at bookstores, newsstands, and on the street. Some publications better deserve the underground label. GI publications during the Vietnam War were often published and distributed clandestinely. Fuck You! (A Magazine of the Arts), was a crudely mimeographed, poetry-centered magazine that Ed Sanders published and distributed secretly, in New York’s East Village, from 1962-1965. You could get it from behind the counter at just a handful of stores.

What do you think the phrase “underground press” initially meant to those who worked for it and those who relied on it for information?

The first underground papers — the Los Angeles Free Press, the Berkeley Barb, and the East Village Other — appealed to self-styled cultural outlaws, radical intellectuals, beatniks, eccentrics, and artists. Underground papers could seem genuinely subversive, openly flouting society’s conventions and, by the late 1960s, they championed the revolutionary overthrow of the U.S. government.

Some papers, such as The Oracle, seemed to care as much if not more about the look than the content. The design and the artwork made them a challenge to read and understand. Perhaps that was intentional since the papers were aimed at the cognoscenti.

Yes, many of the papers associated with the counterculture produced very creatively designed layouts. Prose could be fitted around swirling drawings, and photo collages. And some of the papers used split-fountain printing techniques, which allowed them to blend colorful inks and create beautiful rainbow effects on their pages (no two of which were ever exactly alike). It was rumored that The Oracle received funding from Owsley Stanley, the infamous LSD chemist.

I enjoyed The Seed and The Great Speckled Bird, for example, more than The Rat. Do you think it helpful to say that some papers where aimed at “freaks” rather than “hippies”?

I found the The Rat very interesting, when I was exploring radicalism on NYC’s Lower East Side, which is where The Rat was produced. But it often had an ugly, angry, macho energy.

By the late 1960s, it became harder to distinguish between hippies and politicos. It was even harder to draw precise distinctions between “freaks” and “hippies,” though hippies were supposed to be gentle and loving, whereas “freaks” were more hard-edged and violent. Some of street kids who contributed to The Rat, took speed and clashed with cops. They didn’t have much in common with the flower-power types from the Haight-Ashbury.

Looking back, do you think that some papers were better than others? Better written, better designed?

There was a huge difference between the best and the worst papers. I like Atlanta’s Great Speckled Bird, the (Chicago) Seed, The Rag (from Austin, Texas), the Berkeley Barb (before it got too radical), the Los Angeles Free Press and The Willamette Bridge. Also, Liberation News Service (LNS)  — which functioned like a radical alternative to the Associated Press (AP) — did consistently good work.

Still, we shouldn’t judge underground newspapers by conventional standards. Almost all of them styled themselves as “community” papers. They were open to whoever wanted to contribute and they were democratically structured.

The writings and perspectives of the most talented, and the most experienced underground journalists, didn’t necessarily prevail over the work of those who were less talented, or more amateurish. Most underground press “editors” tended not to do much editing! All this gave the papers an anarchic, freewheeling quality that some people found charming. But that wasn’t for everyone.

The first writers to describe the history of the underground press, such as Abe Peck, belonged to the Sixties. You and Blake Slonecker belong to a second wave. Do you think that you and Slonecker saw aspects that the Abe Pecks didn’t see because they were too close and personally involved?

It was more the case that Slonecker and myself, and a handful of others, have done huge amounts of archival research that Peck, and others, simply did not to. So, in some respects, we had more and better material to work with.

You were the first person whose work I read who distinguished between the 1960s as a chronological decade and “The Sixties” as a state of mind and as a cultural and political phenomenon. What do we gain by seeing the “Long Sixties” as it has come to be known?

Historians always have to define periods and place parameters on whatever it is they study. We’re always asking, “Where to begin, and where to end?” When I teach courses on the 1960s, I begin in 1955, with the Montgomery Bus Boycott, because that seems to signify the beginning of the modern civil rights movement, which catalyzed the New Left. And I end in 1975, with the fall of Saigon, which seems a fitting end of the era we call “The Sixties.”

Do you think The Sixties would have happened even if there were no underground newspapers?

But the main argument in Smoking Typewriters is that the underground papers helped the movement grow. They would arise in their communities, often in response to local issues or as a product of regional subcultures. The underground papers brought a lot of like-minded people together, and gave them a sense of connection to a larger movement and a cause greater than themselves. They raised democratic expectations and socialized people to become radicals.

Were underground newspapers different than the pamphlets and broadsides of previous eras?

Underground journalists of the 1960s sometimes drew self-serving comparisons between themselves and the pamphleteers of the American Revolution. Pamphlets had the virtue of flexibility; George Orwell once quipped that they need only be “topical, polemical, and short.” After the Port Huron Statement, many more New Left pamphlets, manifestos, and broadsides found their way into print. Individuals usually wrote them. They were not the preferred form among young people who wanted to build a movement based on cooperation and democratic participation. The fact that underground newspapers were made collectively was a huge part of their appeal.

Eric is correct, and I’m surprised we haven’t seen many more mass mobilizations against the Trump Administration. After the great Women’s March last year, I thought they’d become a regular thing. If they were done correctly, I suspect that anti-Trump mass marches could be very effective.

How do you feel about social media?

I’m not a fan. I don’t use Twitter, and my Facebook account is deactivated (mostly for mental health reasons). President Trump seems to get good mileage out of his Twitter account, though I know his tweeting has caused problems. On the other hand, his core supporters seem unshakably loyal. I hate to say it, but maybe his tweets have something to do with that. It’s astonishing to me that his base hasn’t started growing tired of his antics.

You’re speaking about the underground press at Columbia on the eve of the 50th anniversary of the student protests on campus in 1968. What do you want today’s generation of undergraduates to take away from your talk?

It’s not a talk meant to offer lessons to activist undergrads. Nowadays, I think we have far too much amateurishly produced radical and alternative journalism! If any students come to my talk — I hope they do — I’ll try to persuade them to make a habit of reading daily newspapers and prestige magazines, where professionally trained editors and reporters are trying their best to get the news out accurately, and to give the right shape and proportion to the stories they put out.

[Jonah Raskin, professor emeritus at Sanoma State University and regular contributor to The Rag Blog, wrote for Liberation News Service in the late 1960s and early 1970s. Along with more than 700 protestors he was arrested at Columbia in April 1968, and jailed at “The Tombs” in New York City.]

1 Response to Jonah Raskin :
INTERVIEW | Are those typewriters still smoking?