Jonah Raskin : Occupy Austin: This is Just the Beginning 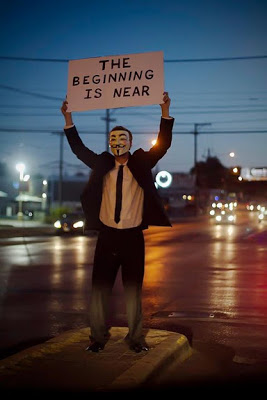 AUSTIN — Occupy Austin attracted the young, who found it new and wonderful, and the old, who found it familiar and wonderful, too. On October 6, 2011, about 1,500 youthful demonstrators, aging protesters, and ageless rabble-rousers gathered outside Austin City Hall to voice their anger about Wall Street greed and about a variety of social and political issues. There were hundreds of signs, almost all of them handmade, that practically shouted views and opinions such as “Decolonize Wall Street” and “Love America Enough to Protest America.”

There were tie-dyed T-shirts, tattoos galore, pierced noses, ears, and more, and a marching band that played the old standby “Ain’t Gonna Study War No More” that the crowd recognized immediately and sang the lyrics to loudly. Yes, it was called “Occupy Austin” but a more apt phrase might have been “Liberate Austin.”

It certainly felt liberating to old and young, students and retirees, union folks and the unemployed. I was in town to talk about the cause of marijuana law reform and couldn’t keep away, not with my 1960s roots still showing, and not after a heart-felt invitation to join the rally from Rag Bloggers Thorne Dreyer and Jim Retherford who introduced me to their friends and to friends of their friends.

By the end of the afternoon, I felt initiated into radical Austin, a city with a long history of radicalism, countercultures, underground newspapers, and resistance to all forms of what we used to call “oppression,” a word that’s once again on the lips of the young and the restless — along with cellphones, Facebook, and Twitter, all of which helped to launch Occupy Austin and, which, according to Gary Chason, will make this movement impossible for the government to stop.

Ashley — who is 22 and who wore bright red leather boots — carried a sign that read “Wake Up, Austin!” How long had she been awake? “Only a few weeks,” she told me. “I woke up after I heard about the protests on Wall Street. I had given up on my generation because they seemed to me to be lazy, selfish, and didn’t care about the larger world. I thought ‘nothing will ever change,’ and I felt so small and insignificant. Now, there’s a sense of hope, a feeling that things might begin to become unstuck and move again.”

Her comments sounded familiar. I had heard them — or at least words very similar to them — 50 years earlier at the start of the 1960s, when the United States was wrapped up in the Cold War and just about everything — except for the civil rights movement — felt frozen and dead. America needed awakening then, too. 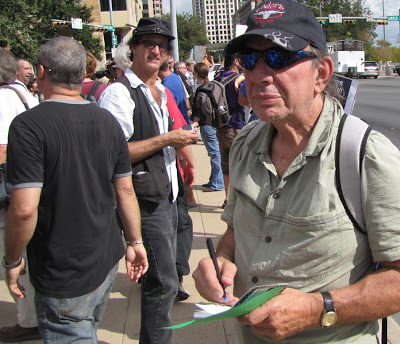 The Rag Blog‘s Jonah Raskin at Occupy Austin, Friday, Oct. 6, 2011. Photo by James Retherford / The Rag Blog.
Occupy Austin had some of the flavor of a 1960s protest, though most of the signs had little or nothing to do with 1960s issues such as war and racism. The signs and the slogans were mostly about corporations, social and economic inequalities, and greed. “Not so fast you greedy bastards,” one large sign with bright red letters read.

Many of the signs proclaimed, “We’re part of the 99%,” a figure that nearly everyone seemed to understand. The police officers in the crowd understood the reference to the 1% of the population who own 99% of the wealth. African-American city manager Mark Ott understood, as did police chief Art Acevedo, who praised the protesters for peacefully demonstrating. Fire Chief Rhoda Mae Kerr, in a bright white uniform, asked everyone in the crowd to put out lit cigarettes. The Texas drought and the danger of fire were on her mind and on the minds of many others.

Yes, the city showed its face at Occupy Austin. The local news media showed up, too, and the event was at the top of the evening news and made the front page of the Austin American-Statesman in a story that lauded protesters and the police for good behavior.

The old-timers mostly kept to themselves and didn’t interact with the 20-somethings, though there were conversations that crossed the generational divide. When Bob Cash, a former SDS member who now lobbies for fair trade, was asked for advice from a young protester, he thought a moment and said, “Don’t trust anyone over the age of 30.”

Katherine, an ex-New Yorker in her 60s who had just retired, said that Occupy Austin was her first ever demonstration. That didn’t seem plausible to me. “Really?,” I asked incredulously. She paused a moment, went down memory lane, and remembered that she had protested once before, in 1970. “I went out into the streets after the students were shot and killed at Kent State,” she said. “That was an outrage. Now I’m outraged at New York Mayor Bloomberg and all his money on the stock market.”

After a few hours outside City Hall the bongo drums seemed to grow louder and louder. I was ready to leave with Dreyer, Retherford, and my new found Austin friends and, yes, comrades too, if you’ll pardon the expression. We crossed the street. I looked back at the crowd. My eye caught one sign that read, “You are breaking my balls,” and another that said, “This is just the beginning.” That seemed about right. It was a beginning, and the protesters did feel a sense of hurt — deep down hurt that only real social change could alleviate.

[Regular Rag Blog contributor Jonah Raskin, a communications professor at Sonoma State University in northern California, was active with SDS and the Yippies in the Sixties. His most recent book is Marijuanaland: Dispatches from an American War (High Times). Read more articles by Jonah Raskin on The Rag Blog.] 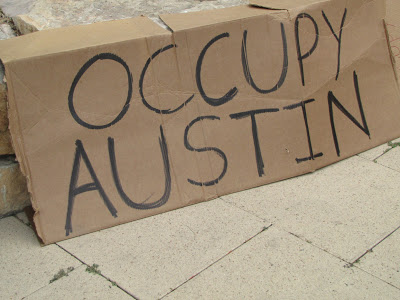 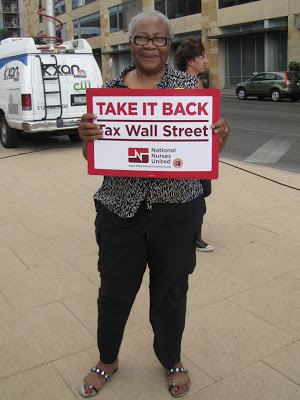 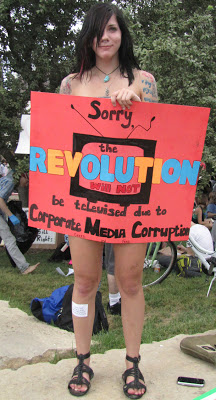 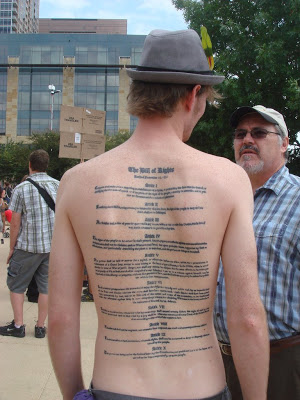 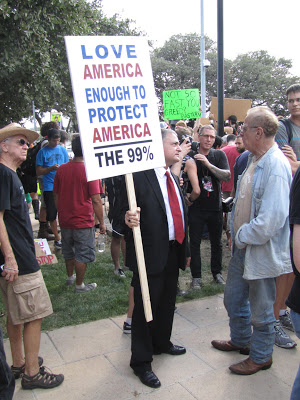 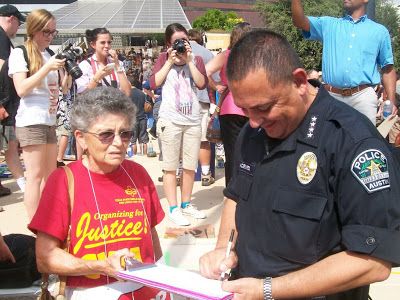 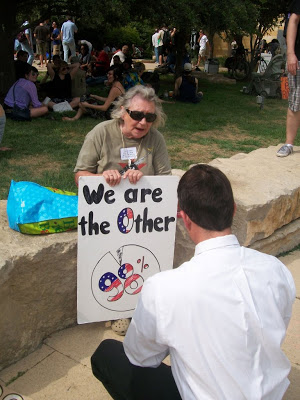 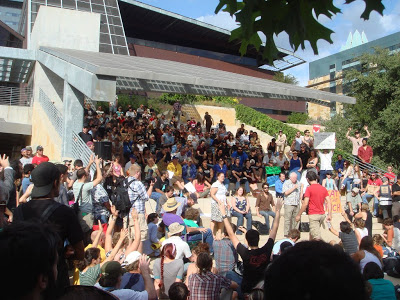 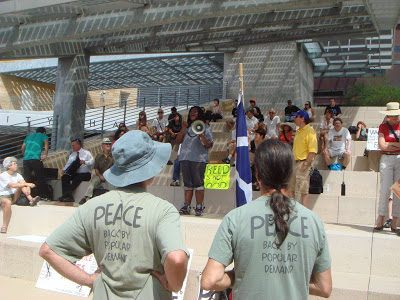 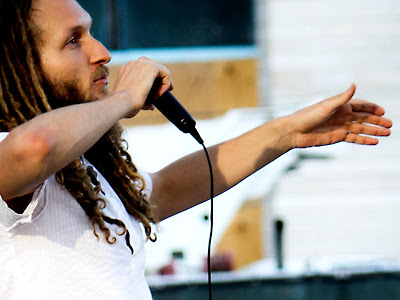 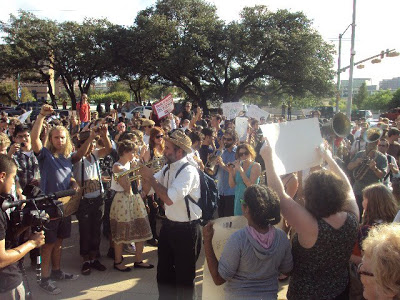 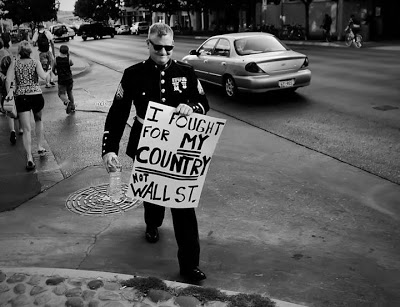 3 Responses to Jonah Raskin : Occupy Austin: This is Just the Beginning