“Tell me what you eat and I shall tell you what you are.”
— French writer, Jean Anthelme Brilliant-Savarin, 1825 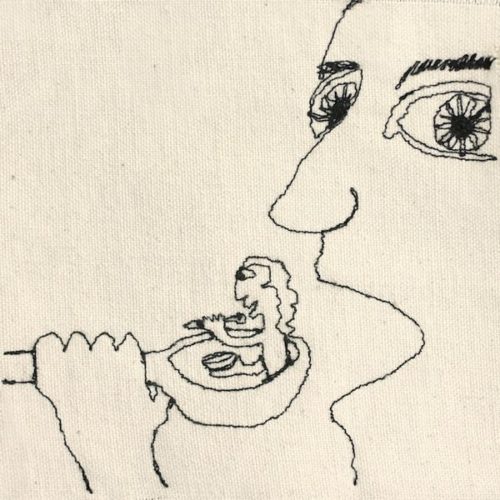 “You Are What You Eat.” Thread on fabric by P.Nosa / Wikimedia Commons.

SONOMA COUNTY, California — Voters were definitely on edge Election Day, but not so edgy that they couldn’t or didn’t abstain from eating. From coast-to-coast and in what’s known as “fly over country,” Joe Biden supporters watched the results trickle in on TV, enjoyed supper, and kept it down. In many cases the results were sickening, but not really nauseating.

I can’t speak for Trump supporters. I don’t know many, though according to the political grapevine members of the Trump team enjoyed hor d’oeuvres, “White House fries” (French fries were apparently unacceptable) and sliders, perhaps hoping that the president would easily slide into a second term in the White House.

An article by Rachel Sugar that appeared in New York Magazine proclaimed, “This election makes meal planning impossible.” That wasn’t the story I heard from friends and family, some of whom, like my brother Daniel, dined alone. He served himself boneless, skinless chicken thighs and bok choy.

“ST,” my long time girlfriend, who comes from a Libertarian family in California’s Central Valley, told me that her father wrote the name “Mike Pence” on his ballot because, as she explained, “he felt the Vice President would do a better job than Trump himself.” My girlfriend had dinner at the home of a hippie caterer whose food usually looks better than it tastes. ST explained that the caterer made “a pumpkin stuffed with an exotic African grain.” I’m glad I wasn’t invited.

Most of my friends ate healthy meals, though the historian Peter Linebaugh, and who lives in Michigan, told me that he mostly binged on sugar, which he has relied on heavily during the pandemic. On Election Day he ate the following: “McVities dark chocolate digestives, homemade sugar cookies, a piece of apple cake, and chocolate-covered almonds.” But he couldn’t remember, he said, what he had for dinner. After scouring his memory he wrote: “I think it was the last of the left-over scalloped potatoes, along with some white beans and kale from the backyard garden.” Linebaugh is a fortunate fellow, indeed. His partner, Michaela Brennan, is the house “baker, gardener and cook.”

Zeno Swijtink, a Dutchman transplanted to northern California and a member of Slow Food — the organization that started in Italy and that has spread around the world — cooked ahi tuna, added a tahini sauce, and concocted a bean soup with sausages “that had been hanging around in my fridge.” Dana Biberman whom I’ve known since we were both anti-war activists in ’68, dined on sausages, black beans, and rice. Her husband, Paul, a New York architect, builder, and an excellent home chef, joined her. Born and raised in Philadelphia, Dana told me, “You can stop biting your nails and have a drink.” She assured me that Biden was gonna win Pennsylvania. She was happy to hear about John Hickenlooper’s victory for the U.S. Senate in Colorado.

‘You can stop biting your nails and have a drink.’

I couldn’t believe several of my New York friends who were surprised that millions of Americans voted for Trump. That’s new York provincialism. Where have those New Yorkers been for the last three years? Haven’t they watched the rallies and heard the president’s “Make America Great” speeches. A New York filmmaker posted the comment: “ Just cannot believe how wide the drift is between us and them. Thoughts?” Better believe it.

A New York Magazine editor emailed to say, “As someone who finds it hard to believe that anyone could vote for Trump, I’m seeing too much red.” He added, “loaded up on pork carnitas and a bottle of Chinon.” We’ve known one another since 1970 when we both worked on the McGovern campaign, which Abbie Hoffman, Jerry Rubin, and Ed Sanders supported wholeheartedly. Hoffman, Rubin, and Sanders even wrote and published a paperback book called Vote! I followed their advice, cast my ballot for McGovern, and thought he had a good shot at winning. I don’t remember what I ate on Election Day in November 1972, but I remember I attended a party at the New York apartment of Patty Oldenberg. Allen Ginsberg was there, along with Peter Orlovsky. We were supposed to be celebrating.

How muddleheaded we were!

A former student had ‘tater tots’ for supper.

This November, on the other side of the continent and on the other side of the culinary divide, a former student, her husband, and their kids had “tater tots” for supper Election Day. At first I didn’t believe her. But she insisted it was true. She added that the next day she and her family had take-out Chinese. In San Francisco, union organizer Ken Tray and his photographer wife, Jeanne Hansen Tray, sat down and devoured sausages, kale, and mushrooms along with a Zinfandel from Lodi. Ken touted the rye bread from Firebrand Bakery on Broadway in Oakland.

J. J. Wilson, a Virginia Woolf scholar and a dyed in the wool Virginia Democrat, sipped Sherry and munched on Stilton and water crackers. I made myself pasta with tomato sauce and Parmesan cheese, the ultimate comfort food in my home. I needed to be comforted when I heard the news of Marjorie Taylor Greene’s win in Georgia, which, as The New York Times put it, “brings Qanon into Congress and the G.O.P.” But my spirits lifted when I heard that transgender activist Sarah McBride defeated Republican Steve Washington in Delaware to become the nation’s first openly transgender state senator.

All of the above, suggests to me, once again, that we are what we eat. As the nineteenth-century French writer, Jean Anthelme Brilliant-Savarin, the author of The Physiology of Taste, noted one hundred and ninety-five years ago: “Tell me what you eat and I shall tell you what you are.” Donald Trump must have eaten a lot of shit.