Just Another Day in Baghdad 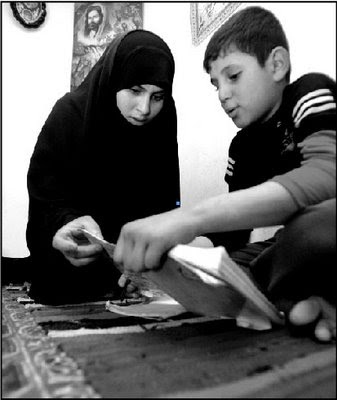 Iraq’s secret war of widows deepens
By Agence France-Presse / May 10, 2008

BAGHDAD, Iraq — Ducking bullets and dodging car bombs may be part of daily life for millions of Baghdadis but behind black veils yet another struggle is being waged — the battle of war widows — to keep young families alive.

Iraqi housemaid Um Haidar wears a black scarf as a sign of mourning since her shop-assistant husband was gunned down two years ago. Their 10-year-old son is now working and out of school.

Um Haidar, 35, is among an estimated one million Iraqi war widows trying to eke out a living. Official figures estimate that one in six women aged 15- 49 is widowed.

Um Haidar’s son left school after his father’s death and works at a Baghdad barber’s shop. He brings in much needed dinars to support his four-year-old sister.

“I wear black, not only because I’m sad and grieving but also because of the bad security in Iraq. Everything is bad and we face the killing and bloodshed every day in our life,” she said.

Some women wear the black abaya, or the all-covering head-to-toe dress, fearing attacks from Islamic fundamentalists who insist that women should cover up and not appear in bright colors.

But for Um Haidar the real battle is to put food on the table for her children with no man to support her. The deepening sectarian violence is not making it any easier for the vulnerable.

“Since I lost my husband, I am fighting to make a living for my family,” she said, adding that only a few supported her.

Widow Wafaa Faraj, 38, a mother of two girls aged 13 and eight, has moved in with the family of her late husband, Mohammed.

She lives in a small room on the first floor of the house with just one bed. The room has a television set in a corner and minimum furniture that includes a small desk for her daughter to study.

“I can barely manage to live,” she said. “I’m living in a bad situation. There is no one to take care of me, or my two daughters. I work hard every day to be sure that my little daughters have dinner before they go to sleep.”

Her policeman husband was killed by a sniper at Al-Mutanabi street in central Baghdad. She said the police later told her that her husband’s killer was a Kuwaiti national.

“I was against the war and I will be against it always, I hate the war because it made many women lose their husbands, and many Iraqi children became fatherless,” Faraj said.

She is also bitter with US forces, who number more than 150,000 deployed across the country and are still battling militiamen, amid increasing sectarian violence that is also taking a heavy toll among civilians.

“The US forces came to Iraq to make us live in freedom, but we didn’t find freedom, we find killing and bloodshed every day and everywhere,” she said.

Read all of it here. / Inquirer.net