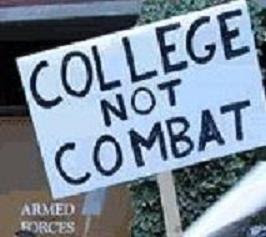 As Julia Ward Howe wrote in her Mother’s Day Proclamation, “Our sons shall not be taken from us to unlearn all that we have taught them of charity, mercy and patience. We women of one country will be too tender of those of another to allow our sons to be trained to injure theirs” To commemorate this original Mother’s Day call to Action, Peace Action invites you help protect American youth from the Pentagon’s predatory and illegal recruitment tactics. You have the power to fight the Armed Services Vocational Aptitude Battery (ASVAB).

STEP 1: Educate Yourself and Your Family
The ASVAB is given to more than a half million public high school students every year under the guise of “career testing”. Unfortunately ASVAB only tests for military careers and all of the results from the four-hour test, along with sensitive personal information, are released to military recruiters – unless schools take steps to protect student privacy.

STEP 2: Educate Your School About Option 8
Most schools don’t know the ASVAB is primarily a military recruiting tool. After all, the military markets it as a public service, a free “Career Exploration Program” to assist kids in finding appropriate career paths. More importantly, most schools aren’t aware of “ASVAB Release Option 8,” which allows schools to have the military proctor the test while keeping scores and personal information private.

STEP 3: Take Action in Your School District.
Four of the nation’s largest school systems have already been persuaded to protect student privacy by selecting Option 8. Privacy advocates in Maryland recently passed legislation requiring public high schools to notify each student and their guardian of their right to prevent students’ names and contact information from being released to military recruiters (Senate Bill 428).

Peace Action has already supported successful campaigns to protect students from predatory military recruiting across the country, contact us for help doing this work in your community.

Whether you’re a mother or a father – or a grandparent – or someone without children but concerned about the future let’s rise to Julia Ward Howe’s original call to “promote the alliance of the different nationalities, the amicable settlement of international questions, the great and general interests of peace.”

Let’s use the influence that we have in our own communities to protect all our children. Let’s all write to our School Boards, Superintendents, and Principals telling them about the ASVAB and Option 8.

This entry was posted in RagBlog and tagged Military, Peace Movement. Bookmark the permalink.