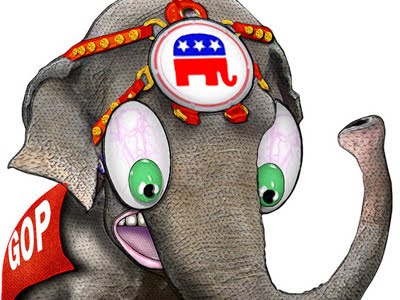 The propositions fit into the typical Republican mindset — they tend to see things in black and white, without the ambiguities and complexities that exist in the real world.

AUSTIN — When I look at the most pressing issues of our time, I see the following: the economy is running barely above the stagnation level; we continue to drain our treasury of hundreds of billions of dollars in overseas wars; we continue to operate overseas prisons that are more reminiscent of gulags than they are of institutions that reflect purported American values; we continue to allow torture (indirectly if not directly); teachers have been laid off by the hundreds of thousands; and the Congress is not even a shadow of the institution our founders created.

But when the Republican Party of Texas looks at the most pressing public issues, it sees the need to focus on giving public money to religious schools, depriving 50 million Americans of vitally-needed healthcare, having government officials promote the practice of Christianity, and preventing the government from responding to fiscal emergencies.

Clearly, the Republican leaders of Texas have standards of morality different from those I find important and try to honor.

On December 3, 2011, the State Republican Executive Committee (SREC) voted to place on the Republican Primary Ballot the following propositions:

These four propositions illustrate as well as anything the nature and character of the Republican Party in Texas, as well as the Republican Party nationwide. It wants to take state tax dollars and divert them from public education to private, mostly religious education programs. The public money cannot be given directly to religious institutions for religious education because the Constitution prohibits that, but it can be given to parents in the form of vouchers.

Those parents will be free to give those publicly-funded vouchers to the school of their choice, which data from areas where some form of voucher system has been used show will be mainly to religious schools — at the rate of 85% to 95%.

As Barry Lynn, executive director of the Americans United for Separation of Church and State, has said about such propositions: ”Taxpayers shouldn’t be forced to pay for religious schools. The principal purpose of a religious school is to spread its teachings, whether they be the Gospel of Jesus Christ or the words of Mohammed. They are specific teachings from ministries of religious denominations.”

The ballot proposition is worded in a way that few people would disagree with. But it is all deceptive. We all hate bureaucracies. Who would want to give them more money? Yet, we do so constantly, apparently unaware that sociologists for at least 50 years have found that all bureaucracies, government or private sector, have the same characteristics.

Of course, who wouldn’t like the freedom to choose the schools our children attend, but if you believe that this system will save “significant taxpayer dollars,” you might want to consider investing in a group organizing to buy the Brooklyn Bridge. The history of public funding of education has not shown that funneling public money to the private sector for education is cost-effective.

Our public schools are already underfunded. This proposition will only exacerbate that problem. And public schools accept everyone regardless of disabilities, test scores, religion, or other factors. Private schools can discriminate in selecting students, easing their performance burden, while increasing the burden on the public schools.

School vouchers are bad public policy as well as a thinly-veiled way around the Constitution, which requires that church and state remain separate.

The second proposition, which cleverly injects the name Obamacare to refer to the PPACA, could just as accurately be called the national version of Romneycare, which was the model used to create the PPACA. But Republicans are all about bashing Obama, so it is better from their point of view to use his name derisively.

But the healthcare act that will cover at least 50 million more people in the U.S. does not ration healthcare and does not intrude the government into the doctor-patient relationship. It is the private insurance companies that do that, as anyone who has used private health insurance has learned.

They require approval before being referred to a specialist, they require medically-unnecessary procedures before approving some treatments, and they reject drugs that my doctor wants to prescribe. Appealing any adverse decisions about these matters requires an enormous waste of medical staff’s and patients’ time.

The PPACA was not my choice of programs to provide healthcare services to all Americans because it does not do so in the most direct way or at the lowest cost — Medicare for all would do a much better job of satisfying those goals.

And the PPACA has taken a bad rap on the issue of being the only time in our history when the government has mandated that individuals must buy some product in the private sector. As Einer Elhauge, a professor at Harvard Law School, has shown, this assertion is not true, no matter what Justice Antonin Scalia says:

The founding fathers, it turns out, passed several mandates of their own. In 1790, the very first Congress — which incidentally included 20 framers — passed a law that included a mandate: namely, a requirement that ship owners buy medical insurance for their seamen. This law was then signed by another framer: President George Washington. That’s right, the father of our country had no difficulty imposing a health insurance mandate.

That’s not all. In 1792, a Congress with 17 framers passed another statute that required all able-bodied men to buy firearms. Yes, we used to have not only a right to bear arms, but a federal duty to buy them. Four framers voted against this bill, but the others did not, and it was also signed by Washington. Some tried to repeal this gun purchase mandate on the grounds it was too onerous, but only one framer voted to repeal it.

Six years later, in 1798, Congress addressed the problem that the employer mandate to buy medical insurance for seamen covered drugs and physician services but not hospital stays. And you know what this Congress, with five framers serving in it, did? It enacted a federal law requiring the seamen to buy hospital insurance for themselves. That’s right, Congress enacted an individual mandate requiring the purchase of health insurance. And this act was signed by another founder, President John Adams.

But perhaps the most hypocritical part of Proposition 2 is the language used to suggest that the PPACA would intrude the government into the doctor-patient relationship. That is exactly what virtually every Republican officeholder at every level of government has tried to do with a woman’s right to choose healthcare options when she is pregnant, or even if she wants to prevent pregnancy. The new Republican goal seems to be to turn back the clock even on contraception.

The third Republican proposition is arguably the most dishonest and deceptively worded of the four. Of course, the government should have nothing to say about how anyone prays, whether the prayer is done in private (as Jesus recommended) or in public (as the Pharisees preferred). But knowing Republicans as I do, I suspect what they intend by this proposition is to both promote government-sponsored prayer and keep the government from insisting that such prayer be non-sectarian, as most courts have held that it should be.

By using the words “public prayer,” rather than “government prayer,” they have created a proposition that will mean nothing to those of us who understand the distinction.

Anyone who wishes to pray at non-government public events or out on the public street corner should feel free to pray to any god they choose, whether Jehovah or Allah or Krishna or whomever or whatever. But if the Republicans are setting us up to argue that sectarian prayers at government meetings are OK with their constituency, they have worded the proposition incorrectly to make such an interpretation valid. The ambiguity of their wording makes any conclusion about the voting on this proposition without merit.

In some ways, the Republicans’ fourth proposition is the least troubling, but it is too brief to be useful in making public policy. In unusual times, it may be necessary for the federal government to borrow money to prevent a calamity — like the collapse of the banking system. Republicans and Democrats alike found this to be the case in 2008. What they did was not as effective as other actions they could have taken, but the course they pursued required spending money that wasn’t available in the treasury. There was no time to have a national referendum on the subject.

I would like to have a balanced federal budget, as we had in 2000, at the end of Bill Clinton’s two terms, and I would like to stop out-of-control spending, but there is no simple formula to get us there. A contrived ballot proposition is useless in achieving those goals.

The Republican propositions on the primary ballot this year fit into the typical Republican mindset — they tend to see things in black and white, without the ambiguities and complexities that exist in the real world. Their concerns do not reflect the moral imperatives that used to be common among nearly all Americans. Instead, the Republican Party of today represents the narrow, selfish, parochial interests and concerns of most of the evangelical community and the libertarians of the Ayn Rand mold.

If Republicans want to be taken seriously, they need to stop insulting everyone’s intelligence with deceptive and dishonest ballot propositions, something the Democrats (as well as most politicians) have done in the past with equal fervor. At least this year Texas Democrats don’t have any ballot propositions for voters to understand, or misunderstand.