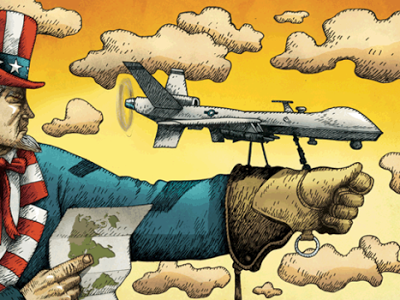 The American belief in technology as our savior, even in carrying out assassinations, knows no bounds.

Ever since homo sapiens walked in East Africa 200,000 years ago and feared the rustling in the grass, we have known that this is a dangerous world. If we are lucky, we are taught by those who raise us how to avoid the dangers or deal effectively with them.

Now that we have “advanced” civilizations, we deal with the world’s dangers at many levels. Danger is no longer a problem of the individual, the family, the clan, the village, or the city-state; it is now a problem for the country in which we live.

I have no illusions about the dangers in the world, though as an American living in a small city, I have to worry less about those dangers on a day-to-day basis than do my relatives and friends who live in major cities and metroplexes. But worrying about dangers for the country as a whole is a far different problem. One of the factors that makes this problem more different than it has to be is an assumption that has driven American foreign policy at least since World War II.

We decided after Hitler had his day and lost it and the Japanese acted recklessly and paid a terrible price, that the U.S. had to have a hand (if not a fist) in running the affairs of the entire world — so that we would never have to fight another world war and so that our corporations could get access to all of the products, goods, and resources they needed to prosper.

We decided that too few people in the world would make the civilized decisions that Americans would make. Most of the rest of the world could not be trusted to let us exploit their natural resources and their people, so we had to intervene forcefully almost everywhere on a regular basis.

For many years, the U.S. had an official policy prohibiting assassination as a tool of this foreign policy, but a practice of planning and/or doing precisely what we officially condemned. There is little evidence that assassination has had any lasting benefits. What it requires is more and more assassinations, all of which violate our own legal principles.

As Thomas Jefferson School of Law professor Marjorie Cohn has written: “Targeted or political assassinations — sometimes known as extra-judicial executions — run afoul of the Geneva Conventions, which include willful killing as a grave breach. Grave breaches of Geneva are punishable as war crimes under the U.S. War Crimes Act.”

So widespread have U.S. assassinations become that Prof. Gordon L. Bowen, a political science professor at Mary Baldwin College in Virginia, teaches an entire course on America’s targeted assassination programs. The killings of elected Guatemalan President Jacobo Arbenz Guzman and others were discussed within the CIA as early as 1951. Arbenz resigned from office in 1954. Assassination planning proceeded to the point of drawing up “hit lists” of Guatemalan officials, selecting assassins, and beginning their training.

The U.S. Senate’s Church Committee reported in 1975 that at least five foreign leaders were targeted for assassination, including Fidel Castro of Cuba, Patrice Lumumba of the Congo, and Rafael Trujillo of the Dominican Republic. Just before the Church Committee’s Report, Chile’s President Salvador Allende and Armed Forces Chief of Staff Rene Schneider were assassinated with the assistance of U.S. officials, though the CIA blamed Schneider’s death on others.

After the report, President Gerald Ford issued an executive order banning such assassinations. This order was renewed by both Presidents Jimmy Carter and Ronald Reagan. In 1995, President Bill Clinton approved creation of a list of foreign terrorists who were to be captured or killed, and the use of lethal force was authorized against Osama bin Laden and several others in his organization. In 1998, a Tomahawk missile was fired into a training camp in Afghanistan in an attempt to kill bin Laden.

In Confessions of an Economic Hitman, author John Perkins not only details the schemes to make third-world countries so indebted that they could not repay loans and would be at the mercy of U.S. corporations in collaboration with U.S. intelligence agencies and the World Bank, he also explains how assassinations throughout the world were used to eliminate political leaders who would not bend to the will of the U.S. and U.S. corporations.

A widely-accepted view, sometimes expressed during the confirmation hearings for John Brennan to head the CIA, is that our assassination policy via drones is counterproductive. That is, it results in many more enemies than we eliminate because we kill many innocents when we take out a targeted person. But Brennan believes we are getting better at killing our presumed enemies with drones, so presumably we will be making fewer enemies in the future.

The American belief in technology as our savior, even in carrying out assassinations, knows no bounds. However, even the staid New York Times editorial board is against this policy:

We do not buy the administration’s claim to have the authority to kill Americans, and other suspects, far beyond any battlefield with no oversight and no review. Mr. Brennan’s assertions that the government only resorts to lethal force when “there is no other alternative” is at odds with reports of vastly increased drone strikes.

But some, for instance commentator David Brooks, have bought into the notion that in all the drone attacks since the program started, we have killed only three innocents as he said on NPR last week. And both the administration and Sen. Diane Feinstein claim that the attacks have led to the deaths of innocents in the single digits. However, Medea Benjamin of Code Pink and nearly three dozen other Americans went to Pakistan recently and talked to the families of 176 children slain in U.S. drone attacks there.

And then there is the policy of killing American citizens who are alleged to have encouraged terror by words and/or by deeds. The administration will not release the evidence to support conclusions of their guilt, so there is no way to judge the conduct of assassinating American citizens while they are on foreign soil except to note that the 4th, 5th, and 8th Amendments to the Constitution seem to forbid such conduct.

But, at the least, there should be a high burden of proof required for assassinating at a cafe in Yemen a 16-year old American such as Abdulrahman al-Awlaki, born in New Mexico, who had no ties to terrorism that have been made public or claimed by the administration. All we know is that his father, Anwar al-Awlaki, had been killed by a drone attack two weeks earlier because of alleged terrorist activities and that the son had been trying to find him before his assassination.

Because John Brennan, who worked in the war on terror for President George W. Bush, will not even acknowledge that waterboarding is torture, his statements on other matters are suspect. I find it difficult to accept that Brennan, as he claims, really “agonizes” about each and every drone assassination he has recommended to President Obama.

It is more difficult still to believe that he agonizes for the hundreds of innocent men, women, and children who are killed at restaurants, weddings, and funerals and have become the collateral damage of this policy that Brennan glibly supports, implements, and lies about openly before the Senate.

Those with real moral scruples would talk and act more like Dietrich Bonhoeffer than Dick Cheney. John Brennan is an immoral actor in an amoral world. We should not have someone with his callousness running the CIA, but he is Barack Obama’s choice, and that choice says as much about Obama as it does about the nominee.

The history of American assassination policy may be the best example to show that the slippery-slope theory sometimes is a reality. What began as assassination planning in 1949 has grown to periodically carrying out assassinations for U.S. policy purposes, and then funding major operations so that surrogates do the killing, and now, because of missile and drone technology, making them easy and widespread to do directly. It may have taken 50 years to achieve the same number of assassination-related deaths, collateral and otherwise, that we now achieve each week.

There is no better way to end this column than to quote from Bill Moyers’ brief comment made at the end of his broadcast last Friday:

This week, The New York Times published a chilling account of how indiscriminate killing remains bad policy even today. This time, it’s done not by young G.I.’s in the field but by anonymous puppeteers guiding drones by remote control against targets thousands of miles away, often killing the innocent and driving their enraged families and friends straight into the arms of the very terrorists we’re trying to eradicate.

The Times told of a Muslim cleric in Yemen named Salem Ahmed bin Ali Jaber, standing in a village mosque denouncing Al Qaeda. It was a brave thing to do — a respected tribal figure, arguing against terrorism. But two days later, when he and a police officer cousin agreed to meet with three Al Qaeda members to continue the argument, all five men — friend and foe — were incinerated by an American drone attack.

The killings infuriated the village and prompted rumors of an upwelling of support in the town for Al Qaeda, because, the Times reported, “such a move is seen as the only way to retaliate against the United States.” Our blind faith in technology combined with a sense of infallible righteousness continues unabated. It brought us to grief in Vietnam and Iraq and may do so again with President Obama’s cold-blooded use of drones and his seeming indifference to so-called “collateral damage,” otherwise known as innocent bystanders. By the standards of slaughter in Vietnam the deaths by drone are hardly a blip on the consciousness of official Washington.

But we have to wonder if each one — a young boy gathering wood at dawn, unsuspecting of his imminent annihilation, the student picking up the wrong hitchhikers, that tribal elder standing up against fanatics — doesn’t give rise to second thoughts by those judges who prematurely handed our president the Nobel Prize for Peace. Better they had kept it on the shelf in hopeful waiting, untarnished.

Moyers’ comment may be President Obama’s Walter Cronkite moment — when a respected journalist declares that a misguided foreign policy needs to end. Let’s hope it doesn’t take another six or seven years for that to happen.