Laura Pointras tells Snowden’s story in an engaging account that is both enlightening and unsettling. 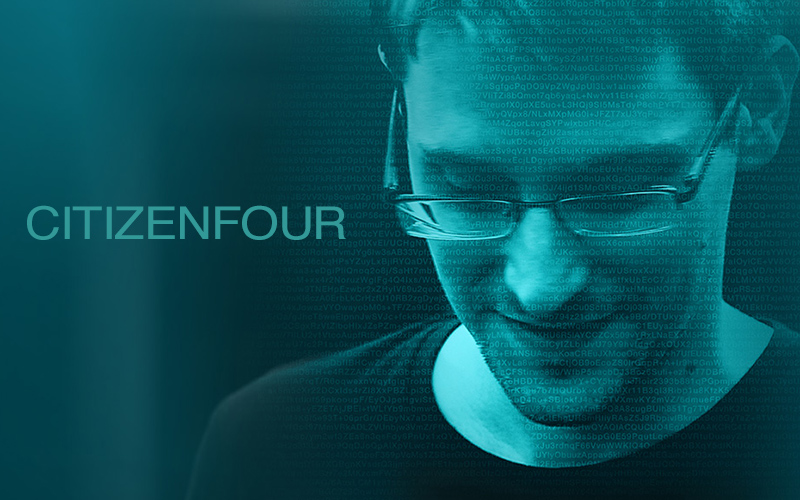 Citizen Four is the name used by 29-year-old Edward Joseph Snowden when he first contacted Laura Poitras in January 2013. Poitras was making a film about post-9/11 surveillance when she began receiving encrypted emails from Snowden, though she didn’t know who was sending the messages at the time. In 2012, she had received a MacArthur Genius Fellowship and is a 2014 co-recipient of a Pulitzer Prize for Public Service.

Poitras has done a trilogy of films since 9/11. My Country, My Country focuses on the Iraq War and received an Academy Award nomination in 2007. The Oath, nominated for two Emmy awards, is about the U.S. detention center in Guantanamo. Citizenfour — Poitras’ latest documentary — tells the story of how Edward Snowden came to provide detailed information about our government’s secret surveillance program. It recently received an Oscar for Best Documentary, as well as over three dozen other film awards before the Oscar.

Poitras and journalist Glenn Greenwald first met with Snowden in Hong Kong in 2013.

In the summer of 2013, Poitras and journalist Glenn Greenwald first met secretly with Snowden in Hong Kong, where Snowden gave them evidence of governmental wrongdoing and explained the significance of the information he had obtained through his top-secret security clearance as an NSA and CIA contractor.

Poitras filmed the meetings and tells Snowden’s story in an engaging account that reveals both the sincerity of Snowden’s convictions about his government’s wrongdoing and the anxiety that his action created in him. This film reveals how several investigative journalists worked this story: they don’t meet their informant in a dark parking garage, but in a Hong Kong hotel room.

I have always seen Snowden as a whistleblower, but I had not formed a clear opinion about his character until I watched Citizenfour. It is both enlightening and unsettling. It reveals the significant danger unleashed by Congress and two presidents when they and their appointees approved and often dissembled about the extraordinary surveillance of the American people. It is a surveillance that destroys the liberty we have always claimed is ours as Americans.

Probably, most of us have not been more than academically or theoretically concerned about the surveillance machinery that has been turned against us. We may have known that the government was accessing our telephone data, viewing our emails, perhaps examining our library use, and monitoring our Internet searches. But because we aren’t terrorists, we haven’t worried too much about that.

I now understand that even George Orwell, a brilliant prophet of modern state control of citizens, which he predicted in the novel 1984, was unable to convey just how devastating to our liberties the surveillance of our private lives might become. Not only is the state’s data collection constant and ongoing, it is also archived and searchable at any time that a government official decides to piece together what any of us might have been doing in the past.

Every piece of information in our lives can be linked by date, time, activity, and association. The use of credit cards, telephones, email, the Internet, passwords, toll logs, transit tickets, prescriptions, electronic calendars, cell phone apps, security cameras, and on and on can be linked together to establish what we did (and sometimes what we said) on a particular day, at a particular time.

‘What people used to call liberty and freedom, we now call privacy.’

One of the most alarming statements made in Citizenfour comes not from Snowden (though I’m sure he agrees with it), but from an encryption and security expert and journalist, Jacob Applebaum:

What people used to call liberty and freedom, we now call privacy. And we say in the same breath that privacy is dead… I think that we should consider that when we lose privacy, we lose agency; we lose liberty itself because we no longer feel free to express what we think. There is this myth of the passive surveillance machine. But actually, what is surveillance except control? This notion that the NSA is passive is nonsense.

This statement stands in stark contrast with President Obama’s opinion that “I don’t think Mr. Snowden was a patriot.” What could be more patriotic than to blow the whistle on a government that has surreptitiously deprived all Americans of our liberty? All that we are waiting for is for someone to be put in charge of the database who will use absolute power to create absolute tyranny. And while we are waiting, Snowden (through the reporting of several fearless journalists) has shown us what lies we have been told and what our government is doing.

Snowden is the opposite of W. H. Auden’s “Unknown Citizen.” He is now well-known and seems to me courageous beyond anything most of us will demonstrate in our lifetimes. Unlike Auden’s citizen, we have heard from Snowden that many things are going wrong with our country.

It is a tragedy that Snowden has been exiled to Russia, not by his own choice, but by an action of the U.S. government. After his identity was revealed near the end of the Hong Kong interviews with several trusted journalists, Snowden sought the assistance of the United Nations Human Rights Council. He was protected for a limited time in Hong Kong before he left on a flight to a country that had no extradition treaty with the U.S. That flight took him through the Moscow airport. Upon his arrival in Moscow, the U.S. revoked his passport, and he was stranded in the transit section of the airport for 40 days until Russia agreed to give him protection for one year. He has remained there ever since.

In 1864, Republican President Abraham Lincoln said in a speech in Baltimore, “The world has never had a good definition of the word liberty and the American people just now are much in want of one.” That is as true today as it was 160 years ago. Perhaps Applebaum has explained the meaning of liberty as well as it can be explained. If so, we the citizens of the United States are being deprived of it by our government every minute of every day.

Citizenfour can be seen on HBO and HBO Go, and is scheduled to stream on iTunes beginning April 24 for $19.99.