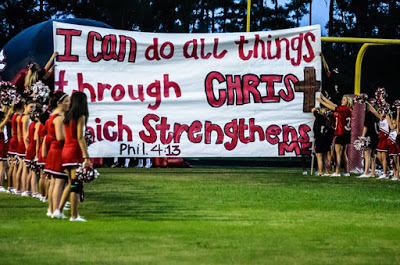 Can cheerleaders who represent the Kountze Independent School District, while acting in their official capacities as school cheerleaders, promote their personal religious views?

SAN MARCOS, Texas — It seems that it is still popular to beat up on atheists and agnostics in Texas, in spite of gains in acceptance of both groups. At least, politicians have found that they can stir emotions and benefit politically from standing up for God and Jesus, whether or not God and Jesus want their help.

Governor Rick Perry and Attorney General Greg Abbott recently jumped on the religion bandwagon yet again to denounce atheists and, by implication, their partners in non-belief — agnostics, freethinkers, infidels, and secular humanists. Abbott directly attacked the Freedom From Religion Foundation (FFRF) as an organization from out of state.

While it is true that FFRF’s headquarters are in Wisconsin, FFRF has 700 members in Texas, including me. At its recent annual conference, there were members from 46 states in attendance. It is a national organization with affiliated groups in Texas and members from virtually every state.

The “outside agitator” description has been used forever to denounce anyone or any group that is not from the particular community where a controversy has arisen. In this case, the community involved is Kountze, Texas, located in Hardin County between Beaumont and Woodville, in the heart of what is known as the Big Thicket, an ecologically diverse and sensitive part of southeast Texas.

There is even a national park located there dedicated to preserving the unique natural environment of the area. Members of my family have lived in Hardin County for over 50 years, and I have done legal work there.

The current controversy in Kountze concerns a straight-forward constitutional question: Can cheerleaders who represent the Kountze Independent School District, while acting in their official capacities as school cheerleaders, promote their personal religious views?

Reasonable people might differ on their answer to this question (more about that later), but there is nothing reasonable about Perry and Abbott, both of whom have used religion to gain political advantage. On October 17, Perry and Abbott held a joint press conference to proclaim their undying support for Jesus and the Kountze cheerleaders’ right to press their religious beliefs on everyone attending football games while representing Kountze High School.

Gov. Rick Perry said, “We will not allow atheist groups from outside of the State of Texas to come into the state, to use menacing and misleading intimidation tactics, to try to bully schools to bow down at the altar of secular beliefs.”

Attorney General Abbott chimed in with, “After receiving a menacing letter from an organization with a reputation for bullying school districts, the Kountze [school superintendent] improperly prohibited high school cheerleaders from including religious messages on their game day banners.”

FFRF does not bully anyone. What it does is routinely send letters to governments after receiving a complaint about practices that violate the separation of religion and state, practices which are prohibited by the U.S. Constitution. In response to such a letter from FFRF, the Kountze ISD sought legal advice and concluded that because the cheerleaders were representing the school when they placed bible verses and religious messages on a banner prepared for the football team to burst through at the beginning of each school-sponsored game, the practice should stop.

The cheerleaders, through their parents, then sued the school district in state district court, represented by the Liberty Institute, a fundamentalist legal organization in Plano, Texas, that seeks to inject religion into government at all levels. FFRF is not involved in that law suit, but the group makes a handy whipping boy for political gain by Perry and Abbott. FFRF explained the issue this way:

The Constitution and FFRF are not “preventing freedom of expression,” we are defending freedom of conscience. The Constitution differentiates government (public school) speech from individual speech. Those cheerleaders are free to worship as they like, go to the church of their choice, but not to exploit a public school event, and their school-sponsored podium, to push their personal religious views on an entire stadium. That’s just plain bad manners.

Since the state’s top law enforcer, Attorney General Greg Abbott, and its highest executive officer, Gov. Rick Perry, have openly expressed contempt for atheists and the Establishment Clause, this leads to a climate of intolerance. It takes courage to face down the full apparatus of state government, but we need those brave few to contact FFRF. Don’t let collusion, politicking, and religious fervor in Texas destroy respect for keeping public schools free of religious divisiveness.

Most people seem not to understand that the Constitution is not a self-enforcing document. Unless there is someone willing to ask a judge to determine whether a constitutional violation has occurred, the violation will continue unabated, sometimes for decades or centuries. We had segregated schools until the mid-50s, when several parents stepped forward to contest the separate and unequal public educations afforded their children.

Unless someone is willing to challenge government practices, most politicians are too unprincipled to stand up for the Constitution and end unconstitutional practices, especially when those practices are popular with a vocal group. When it comes to government support of religious practices, fundamentalist and evangelical citizens make their voices heard, and politicians usually acquiesce to their vehemence and emotion.

The closest case to the Kountze cheerleader situation involves having public prayer at football games sponsored by the school district — a government entity established by the state. The U.S. Supreme Court recognized the importance of preserving the secular nature of such high school functions in Santa Fe ISD v. Doe, 530 U.S. 290 (2000).

Santa Fe ISD is a school district near Houston. The school had a policy of electing a Santa Fe High School student to serve as student council chaplain, who would deliver a Christian prayer over the public address system at the beginning of home football games. As explained by FFRF,

One Mormon and one Catholic family filed suit challenging this and related practices as violations of the Establishment Clause, because the policy clearly favored the predominant Protestant viewpoint to the effective exclusion of non-evangelical students and audience members.

Justice John Paul Stevens wrote the majority opinion in Santa Fe ISD, which held that student-led, student-initiated prayer at school events violates the Establishment Clause. The school had claimed that the prayers were a student choice, and that attendance at an extracurricular event like a football game is voluntary. The Court found this rationalization unpersuasive because the prayers were authorized by the public school and took place on public school property at a school-sponsored event.

These salient facts lead a reasonable person to conclude that the school endorses the message of the students, making the students’ remarks public speech, not private religious expressions. Proponents of student-led prayer believe that students should have to choose between attending school functions or not attending to avoid school-sponsored prayer. The Supreme Court disagreed, writing,

The Constitution, moreover, demands that the school may not force this difficult choice upon these students for it is a tenet of the First Amendment that the State cannot require one of its citizens to forfeit his or her rights and benefits as the price of resisting conformance to state-sponsored religious practice.

An earlier U.S. Supreme Court case in 1992 affirmed nearly four decades of court precedent against school prayers. In Lee v. Weisman, 505 U.S. 577, the court held that prayers at public school graduations are an impermissible establishment of religion. Justice Anthony Kennedy wrote for the majority, “if citizens are subjected to state-sponsored religious exercises, the State disavows its own duty to guard and respect that sphere of inviolable conscience and belief which is the mark of a free people.”

While neither of these cases is exactly like the Kountze situation, they raise such similar issues and arise from such similar facts that it is logical to conclude that they control the behavior of the Kountze cheerleaders when they act in an official capacity on behalf of the Kountze ISD. Attorney General Abbott has not explained why these cases should not apply to the Kountze controversy, but he jumped at the chance to intervene officially in the case.

FFRF has noted these two cases, as well as six others that seem to provide adequate precedent to conclude that what the Kountze cheerleaders are doing violates the rights of other students. They include cases concerning prayer at high school graduations, prayer in public schools, devotional Bible-reading in public schools, and pre-football game invocations at public high school football games.

Clearly, the U.S. Supreme Court and lower courts have concluded that public schools have a legal duty to remain neutral toward religion. If the Kountze ISD allows official school representatives — the cheerleaders in this case — to promote religion through the display of signs that include both Bible verses and religious admonitions much like prayers, the Kountze ISD fears that it will be seen as promoting religion. For now, the state district court has ruled that the religious banners can continue. A trial on the issue is set for next summer.

For those people who want government to promote religion, court interventions are a hindrance to their theocratic ambitions. But there is no excuse for the Governor and the Attorney General of Texas to play politics with government promotion of religion. They know what the federal courts have held, but they choose to ignore the holdings — a sort of modern day interposition and nullification intended to undermine the U.S. Constitution, which both have sworn to uphold.