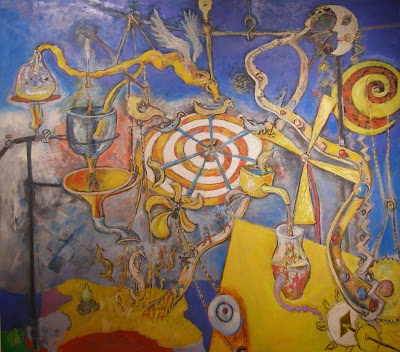 “Perpetual War Machine” by Peter Passuntino / Painting Matters.
The Congress, the President, and
the latest plan for perpetual war

What difference does it make to the dead, the orphans, and the homeless, whether the mad destruction is wrought under the name of totalitarianism or the holy name of liberty and democracy? — Gandhi

The wise men and women of the U.S. Congress are in the midst of deciding that the perpetual war desired by the military-industrial-Congressional complex (Eisenhower’s original formulation before it was edited) will soon become the law of the land.

A defense authorization bill recently passed by the House Armed Services Committee includes a provision that recognizes that we are at war “with al Queda, the Taliban, and associated forces” and gives the president war powers until “the termination of hostilities,” which could mean forever.

President Obama and his successors will be permitted to engage in war until the last terrorist is dead. There was a time — when George W. Bush was president — that I would have thought giving such power to the president to be among the most foolish acts of our political class. After nearly two and a half years of President Obama, I find that I harbor the same thought.

To be clear, I have seen one report that President Obama has not sought this expanded authority. It may be that he does not believe the extra authority is necessary for him to adequately fight terrorism, perhaps because he has found it easy to ignore the consultation-with-Congress requirements of our current law with respect to the bombing of Libya.

Nevertheless, a few representatives enamored with war-making are pushing to give this new unfettered discretion to the president and his replacements.

After considering the history of more than a hundred plus years since the reign of President Teddy Roosevelt, I can’t imagine a worse idea than giving one person the right to engage in war unimpeded by the wise limitations imposed upon the presidency by our founders.

Modern presidents have failed to honor the Constitutional requirement that the country not engage in war without a declaration of Congress approving war. In fact, we have had war under every president since Franklin Roosevelt, who was the last president to seek and get a declaration of war from Congress.

Of course, these violations of the Constitution are as much the fault of Congress as of the presidents who decided that war was the answer to a problem they faced. One explanation is that defense contractors supply an enormous amount of the money our politicians need to get elected. As long as contractors enjoy endless profits from war, they will keep funding politicians who keep those profits coming.

The primary author of the constitutional check on a president’s war power was James Madison, whose thinking is instructive two and a third centuries later:

Of all the enemies of true liberty, war is, perhaps, the most to be dreaded, because it comprises and develops the germ of every other… War is the parent of armies; from these proceed debts and taxes; and armies, and debts, and taxes are the known instruments for bringing the many under the domination of the few. In war, too, the discretionary power of the executive is extended; its influence in dealing out offices, honors and emoluments is multiplied; and all the means of seducing the minds are added to those of subduing the force, of the people… No nation can preserve its freedom in the midst of continual warfare.

From these comments, it is clear that Madison did not anticipate that we would have a huge standing military, always available to be sent throughout the world to protect perceived American interests. He would have been sickened to contemplate 820 U.S. military bases located in 135 countries imposing U.S. hegemony throughout the world.

Congressman John Conyers, in looking at the authorization included in the proposed spending bill, concluded that it “would appear to grant the President near unfettered authority to initiate military action around the world without further congressional approval. Such authority must not be ceded to the President without careful deliberation from Congress.”

Thirty-three members of the President’s own party have requested that the chair of the House Armed Services Committee, Buck McKeon, schedule this perpetual war-making authority provision for public hearings so that the American public can be made aware of it and have a chance to discuss it with their representatives.

The provisions which trouble Conyers and others are found in H.R. 968, the Detainee Security Act of 2011, which will likely be considered as part of the National Defense Authorization Act of Fiscal Year 2012. These provisions would give any president the right to use military force anywhere in the world where terrorism suspects are believed to be present, even if no U.S. citizen has been harmed and the U.S. has not been attacked, or is not under the threat of attack.

The president would be empowered by these new provisions to use military force even within the U.S. and against American citizens. These provisions dishonor both the intent of our founders and the actual words of the Constitution, which provide that the Congress shall declare war, not the president. In our system, it is important that 535 representatives decide when and whether we should go to war, not one person, no matter how well-intentioned or how smart he or she may be.

If you are concerned about the Congress giving unchecked authority to the executive branch to use military force worldwide, there is still time to let your representatives know your views before we embark on what may be irremediable perpetual war.