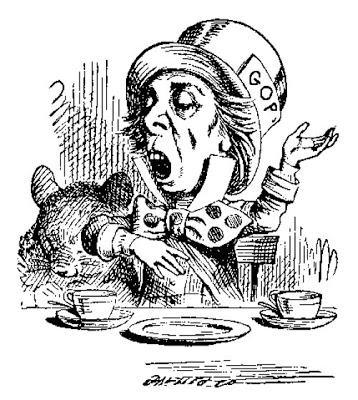 Senior Republican Senator Arlen Specter’s recent defection from the GOP to the Democratic Party has caused an uproar in the toxic hard-core of the remaining Republican party. But it has also brought forth thoughtful, constructive commentary from long-time loyal Republican moderates…

Republican diehards at some point must realize that their invitation-only (Tea) party is over. They must first acknowledge that the vast majority of Americans are simply trying to make it through the economic and societal mess left, in large part, by the last eight years of rogue Republican superintendence. The Grand Old Party is way out of touch with political reality and running mostly on bluster and using a worn out old play book of negativity and exclusion.

Defection from the Republican ranks is notable, with tens of thousands of moderate and centrist Republicans leaving their old party and becoming Democrats or independents. Concerned Americans who have already voted their centrist values rather than hewing to the strident, divisive, self-serving GOP party line.

Senior Republican Senator Arlen Specter’s recent defection from the GOP to the Democratic Party has caused an uproar in the toxic hard-core of the remaining Republican party. But it has also brought forth thoughtful, constructive commentary from long-time loyal Republican moderates like Maine Senator Olympia Snow and former New Jersey Republican Governor Christine Todd Whitman. They have both recently written strong, intelligent Op-Ed articles for The New York Times calling for a reconstituted GOP.

Former Governor Whitman minced no words: “Our democracy desperately needs two vibrant parties. And for Republicans to be that second party, we need to remind the nation of the principles for which we once stood.” Whitman listed those principals as a party “committed to such important values as fiscal restraint, less government interference in our everyday lives, environmental policies that promote a balanced approach between protection and economic interest, and a foreign policy that is engaged with the rest of the world.” The present party seems to have dozed through all their noble ideals for at least the past eight years.

Certainly fiscal restraint was not a hallmark of the Bush-Cheney years. The national debt more than doubled, growing from $5.727 trillion when Bush took office to $11.315 trillion as he hastily cobbled together fiscal bailout legislation as he was leaving office. That legislation included yet another provision to raise the debt ceiling in addition to the seven times Bush had already raised the debt ceiling while in office. For six of those eight years he had a Republican-controlled Congress to back up his reckless, endless spending.

No other administration in history had ever run up such national debt. After the total fiscal irresponsibility of a Republican controlled Congress that allowed mega-banks and mortgage giants to run rampant with virtually no supervision, leading to the worst economic downturn since the Great Depression, it is really hard to be lectured by Republicans about “fiscal responsibility.” And we have not mentioned the costs of the Iraq and Afghanistan wars which had totaled some $840,000,000 at the end of Bush’s term. That’s not far from another trillion bucks.

As far as “less government interference in our everyday lives, environmental policies that promote a balanced approach between protection and economic interest, and a foreign policy that is engaged with the rest of the world,” just analyze those yourself.

For starters, there is Bush’s warrant-less wiretapping of American citizens, unprecedented secrecy and torture, trampling the Constitution, wholesale sellout of our national resources to environmentally hostile energy companies, and a foreign policy that, against the advice of “the rest of the world” led to the unilateral invasion of Iraq, a country which had nothing at all to do with the 2001 9/11 attack.

Just what did happen to Governor Whitman’s “principals” for which her GOP once stood?

Clearly the success and amazing leadership exhibited by President Obama in his first three months in office continues to energize the nation, and the world, even as a global flu pandemic threatens. Obama’s team approach to attacking the GOP debris he inherited has garnered international admiration and support. This has all made the frantic, defeated, remaining conservative Republican leadership angry and more irrational than ever.

Instead of accepting reality and trying to formulate a new platform and bring forward constructive centrist ideas and proposals which would positively engage them with the majority party, they simply continue to implode.

The disappearance of the dinosaurs is generally attributed to a huge asteroid colliding with earth wiping them out. Daily Kos today posted an appropriate graphic that Michael Steele and his party might want to put in their offices and contemplate for a while. The clever, telling logo design even has elements of Leader Limbaugh in it.

This entry was posted in Rag Bloggers and tagged American Society, Republican Party. Bookmark the permalink.