Texas Gov. Perry : Secessionist With His Hand Out 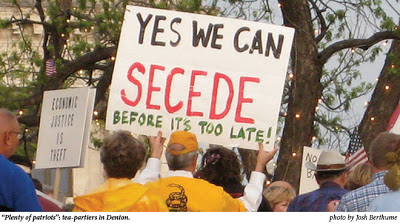 Tea partiers in Denton, Texas. Photo by josh Berthume / The Texas Observer.
‘According to FEMA’s website, Texas has been the site of 13 “major disaster declarations” since Perry took office… since FEMA’s record-keeping began, Texas has received federal disaster assistance more times than any other state.’

Like everyone else, I was amused when Texas Governor Rick Perry, a Republican, requested help from the CDC with swine flu medication just a week or so after he said that the “federal government has become oppressive” and that if Texans started considering seceding from the union, “who knows what might come out of that.” Perry didn’t seem to realize that throwing off the yoke of the federal government would mean no more help when the going got tough.

Today comes news that Perry has issued a disaster declaration for the state of Texas, the first step in getting assistance from federal agencies like FEMA, DHS, and HHS. I decided to take a look at how many times the federal government has bailed Texas out during Perry’s tenure. The results are pretty incredible.

According to FEMA’s website, Texas has been the site of 13 “major disaster declarations” since Perry took office following George W. Bush’s departure in 2001. That includes five instances of severe storms and flooding, two tropical storms, one “extreme wildfire threat,” and Hurricanes Claudette, Rita, Dolly, and Ike. (Texas received significant federal assistance following Hurricane Katrina, but it did not appear on FEMA’s website in the “major disaster declaration” category.)

David Riedman, a public information specialist at FEMA, explained to me that a major disaster declaration is issued when a governor “determines the state’s resources are overrun.” From that point forward, the federal government, under federal law, is required to reimburse the state for at least 75 percent of the cost of recovery. Help is primarily targeted at rebuilding roads and bridges, debris removal, and reparing damage to public buildings. In the relief efforts that are still under way from the damage done by Hurricane Ike, the federal government is reimbursing Texas for 100 percent of all expenses, according to Riedman.

In fact, since FEMA’s record-keeping began, Texas has received federal disaster assistance more times than any other state. 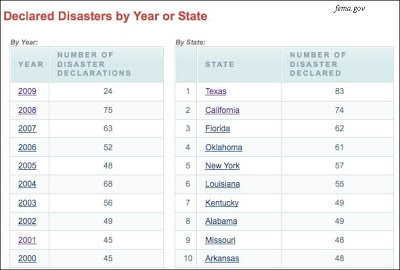 This entry was posted in RagBlog and tagged FEMA, Rick Perry, Texas. Bookmark the permalink.