Losing Our Humor Over Guantanamo 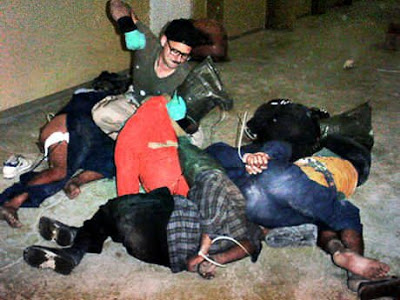 I like to believe that, despite studying Guantánamo for four years, I still have a sense of humor, but last Thursday I lost it, after 258 members of the House of Representatives (including 88 members of President Obama’s own party) voted for an idiotic, paranoid and unjust motion proposed by Rep. Hal Rogers (R-Ken.), which was designed to “Prohibit the transfer of GITMO prisoners, period” (those were his exact words). Just 163 Representatives voted against the motion, which, as JURIST described it, also supports “adding Guantánamo detainees to the federal ‘no fly’ list, and adopting Senate language forbidding the release of photos showing detainee abuse.”

Just in case there was any doubt about the motion, Rep. Rogers, in his inimitable style, explained that he was concerned with “protecting the American people from all threats … including the warped intentions of terrorists and radical extremists,” and proceeded to explain that “This motion strengthens the House bill’s current restrictions on Guantánamo Bay detainees by ensuring their names have been put on the No Fly list and by clearly prohibiting their transfer to the United States — for whatever reason.”

After lambasting the Obama administration for having “No plan” for how to close Guantánamo, Rep. Rogers explained that “this motion prohibits the granting of any immigration benefit for any reason. Without such a benefit, there is no legal way to bring these terrorists to American soil and in our constituents’ backyards. And, that means these terrorists cannot be granted the same constitutional rights as American citizens.”

He added, “After all, these detainees are enemy combatants, caught on the battlefield. They are NOT common criminals and they should not be granted legal standing in our criminal courts by bringing them onto US soil. From my point of view, we cannot waver on this issue, nor can we be weak. There is no reason these terrorists, who pose a serious and documented threat to our nation, cannot be brought to justice right where they are in Cuba. And, I certainly think that is where the American people stand on this issue — they don’t want these terrorists in their hometowns, inciting fellow prisoners, abusing our legal system, and terrorizing their communities.”

This, then, is the reason that I have lost my sense of humor. In May, members of the US Senate voted by 90-6 to approve an amendment to the Supplemental Appropriations Act of 2009, eliminating $80 million from planned legislation intended to fund the closure of Guantánamo, and specifically prohibiting the use of any funding to “transfer, relocate, or incarcerate Guantánamo Bay detainees to or within the United States.” Defending the amendment, Senate Majority Leader Harry Reid (D-NV), speaking for himself and his spineless colleagues who had bowed to a Republican fearmongering campaign, said, “This is neither the time nor the bill to deal with this. Democrats under no circumstances will move forward without a comprehensive, responsible plan from the president. We will never allow terrorists to be released into the United States.”

In June, the House of Representatives followed up by passing a spending bill turning down the administration’s request for $60 million to close Guantánamo, which, as JURIST described it, “placed limits on the government’s ability to transfer detainees to the US and release detainees to foreign countries.” Approved by a vote of 259-157, the bill also prohibited funds from being used to release detainees from Guantánamo into the United States. In JURIST’s words, “The legislation [requires] the president to submit to Congress a detailed plan documenting the costs and risks of transferring a detainee to the US for trial or detention at least two months before the detainee is to be transferred. Additionally, the president [has] to notify the governor and legislature of the state to which the detainee is to be transferred at least 30 days before the transfer and must show that the detainee does not pose a security risk. The bill also requires that the president submit a report to Congress before releasing a detainee into his country of origin or last habitual residence unless that country is the US.

Last Thursday’s vote was for a non-binding motion to instruct conferees to follow Rep. Rogers’ motion (see an explanation here) rather than binding legislation, but, at the very least, it signals that lawmakers on both sides of the aisle are determined to scupper Barack Obama’s pledge to close Guantánamo by January 22, 2010, for two indefensible reasons.

The first is the NIMBY card (Not In My Back Yard), in which lawmakers wail, as Rep. Rogers put it, that “the American people … don’t want these terrorists in their hometowns, inciting fellow prisoners, abusing our legal system, and terrorizing their communities.” This requires everyone involved to conveniently forget that America’s Supermax prisons are the envy of prison-lovers the world over, that convicted mass-murdering criminals — including some convicted of terrorism — are safely locked away in these prisons, and that the rest of the world is looking on and laughing at the lawmakers’ feeble paranoia.

However, the second reason for my despair is rather more fundamental. To hear Harry Reid, the Senate Majority Leader, use the word “terrorists” when referring to the Guantánamo prisoners, and to hear this same word repeated ad infinitum by Rep. Rogers, and by those many members of the Senate and the House who have persistently voted to prevent the closure of Guantánamo, is to step back into those dark months after the 9/11 attacks, when former Vice President Dick Cheney and his closest advisors were hatching their plans to hold anyone who ended up in US custody as an “enemy combatant” — in other words, neither as a criminal nor as a prisoner of war, but as a whole new category of non-being without rights.

It involves stepping back to a time when Cheney and his associates were hatching their plans to hand out bounty payments, averaging $5,000 a head, to the US military’s Afghan and Pakistani allies, who seized at least 86 percent of the men who ended up in Guantánamo, the majority of whom were not “caught on the battlefield,” as Rep. Rogers cla.

It also involves stepping back to when these same men — and defense secretary Donald Rumsfeld — were hatching their plans to prevent the military from conducting competent tribunals under Article 5 of the Geneva Conventions.

Pioneered by the US, and conducted during every war from Vietnam onwards, competent tribunals were designed to separate soldiers from civilians, in situations in which enemy soldiers did not wear uniforms, by holding tribunals close to the time and place of capture, in which these men could call witnesses to establish their credentials. In the first Gulf War, these tribunals led to nearly three-quarters of 1,200 men being released, but in Afghanistan the administration’s decision not to proceed with the tribunals (which was dictated from the highest levels of government) not only contributed to the filling of Guantánamo with people who were neither soldiers nor terrorists, but also led the administration to conclude that the humane standards of treatment required by the Geneva Conventions for all prisoners (whether uniformed personnel or not) did not apply to “enemy combatants.”

This was just the beginning. Voting to prevent the Obama administration from bringing Guantánamo prisoners to the US for any reason — even for federal court trials — endorses the notion that, having randomly rounded up hundreds of prisoners, and having refused to screen them, it was then justifiable to deprive them of the protections of the Geneva Conventions and to transport them to Guantánamo, where they continued to be held without rights, and where, if the lawmakers had their way, they would remain in that perpetual limbo.

What the nation’s lawmakers seem to be forgetting is that the legal black hole of Guantánamo’s early years was only maintained until June 2004, when no less a body than the US Supreme Court was required to intervene. The Supreme Court took the unprecedented step of granting the prisoners habeas corpus rights because, although some of them may well have been soldiers, who should have been held as prisoners of war, or terrorists, who should have been prosecuted as criminals, the Bush administration’s decision to hold them as “enemy combatants” without rights meant that those who claimed that they were innocent men seized by mistake — perhaps in connection with those bounty payments mentioned above — had no way whatsoever of challenging the basis of their detention. Without the intervention of the Supreme Court, they could have been held for the rest of their lives without ever having been screened adequately to determine whether they were, in fact, terrorists, soldiers or innocent men seized by mistake or sold for money.

Even then, this miserable story was far from over, as lawmakers should recall. In an attempt to ignore the impact of the Supreme Court’s ruling, the Bush administration introduced one-sided military tribunals to evaluate the prisoners’ cases, relying on supposed evidence that in fact consisted largely of “confessions” extracted from other prisoners, either through torture or coercion, or through bribery (the promise of better living conditions, or the false promise of freedom), and persuaded Congress (including many of the same cowardly propagandists responsible for the votes in May, June and last Thursday) to pass two hideously flawed pieces of legislation — the Detainee Treatment Act of 2005 and the Military Commissions Act of 2006 — which purported to strip the prisoners of the habeas rights granted by the Supreme Court.

Last June, the Supreme Court rose up again, this time granting the prisoners constitutionally guaranteed habeas corpus rights, and setting in motion a process of reviews that, to date, has led to District Court judges examining the government’s supposed evidence in 38 cases, and ruling that, in 30 of these cases (in other words, in 79 percent of the cases), the government failed to establish that the men in question were members of, or supported al-Qaeda and/or the Taliban. If the lawmakers cared to read the rulings, they would discover that this was largely because the judges concluded that the government was relying on supposed evidence that in fact consisted largely of “confessions” extracted from other prisoners, either through torture or coercion, or through bribery (the promise of better living conditions, or the false promise of freedom).

Fortunately, the lawmakers are no longer able to prevent these cases from taking place — as no doubt, if they were able, they would yet again cast the remaining prisoners into a lawless abyss — but by making such sweeping generalizations about the “terrorists” in Guantánamo, and about preventing the government from transferring any of these “terrorists” to the US mainland to be imprisoned and to face trials, they are committing a number of grievous errors.

They are preventing justice from being delivered in the cases of the small number of prisoners actually accused of involvement in the 9/11 attacks and other acts of international terrorism, and they are shamelessly, ridiculously, and unforgivably tarring everyone held at Guantánamo as a “terrorist,” even though the majority of the men have never been charged with any crime, even though the lack of screening and the bounty payments that I mentioned above have been assiduously chronicled by lawyers and writers — myself included — who have not succumbed to a witless parroting of Dick Cheney’s hollow propaganda, and even though judges in US courts continue to demonstrate that, behind the hype and hyperbole, the majority of these men are not “terrorists” at all.

My sense of humor will return (you don’t deal with Guantánamo day in and day out without having a sense of humor, however dark), but my despair at the spinelessness and stupidity of the majority of the nation’s lawmakers will only dissipate when these men and women can be bothered to examine the facts, rather than letting themselves remain infected by the lies and paranoia of the most disgraceful Vice President in American history.

[Andy Worthington is the author of The Guantánamo Files: The Stories of the 774 Detainees in America’s Illegal Prison (published by Pluto Press, distributed by Macmillan in the US, and available from Amazon — click on the following for the US and the UK).]