Many Ways Industrial Agriculture Is Making Us Sick 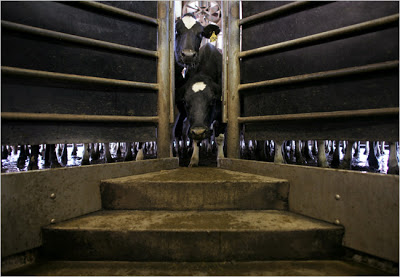 MORRISON, Wis. — All it took was an early thaw for the drinking water here to become unsafe.

There are 41,000 dairy cows in Brown County, which includes Morrison, and they produce more than 260 million gallons of manure each year, much of which is spread on nearby grain fields. Other farmers receive fees to cover their land with slaughterhouse waste and treated sewage.

In measured amounts, that waste acts as fertilizer. But if the amounts are excessive, bacteria and chemicals can flow into the ground and contaminate residents’ tap water.

In Morrison, more than 100 wells were polluted by agricultural runoff within a few months, according to local officials. As parasites and bacteria seeped into drinking water, residents suffered from chronic diarrhea, stomach illnesses and severe ear infections.

“Sometimes it smells like a barn coming out of the faucet,” said Lisa Barnard, who lives a few towns over, and just 15 miles from the city of Green Bay.

Tests of her water showed it contained E. coli, coliform bacteria and other contaminants found in manure. Last year, her 5-year-old son developed ear infections that eventually required an operation. Her doctor told her they were most likely caused by bathing in polluted water, she said.

Yet runoff from all but the largest farms is essentially unregulated by many of the federal laws intended to prevent pollution and protect drinking water sources. The Clean Water Act of 1972 largely regulates only chemicals or contaminants that move through pipes or ditches, which means it does not typically apply to waste that is sprayed on a field and seeps into groundwater.

As a result, many of the agricultural pollutants that contaminate drinking water sources are often subject only to state or county regulations. And those laws have failed to protect some residents living nearby.

To address this problem, the federal Environmental Protection Agency has created special rules for the biggest farms, like those with at least 700 cows.

But thousands of large animal feedlots that should be regulated by those rules are effectively ignored because farmers never file paperwork, E.P.A. officials say.

And regulations passed during the administration of President George W. Bush allow many of those farms to self-certify that they will not pollute, and thereby largely escape regulation.

In a statement, the E.P.A. wrote that officials were working closely with the Agriculture Department and other federal agencies to reduce pollution and bring large farms into compliance.

Agricultural runoff is the single largest source of water pollution in the nation’s rivers and streams, according to the E.P.A. An estimated 19.5 million Americans fall ill each year from waterborne parasites, viruses or bacteria, including those stemming from human and animal waste, according to a study published last year in the scientific journal Reviews of Environmental Contamination and Toxicology.

The problem is not limited to Wisconsin. In California, up to 15 percent of wells in agricultural areas exceed a federal contaminant threshold, according to studies. Major waterways like the Chesapeake Bay have been seriously damaged by agricultural pollution, according to government reports.

In Arkansas and Maryland, residents have accused chicken farm owners of polluting drinking water. In 2005, Oklahoma’s attorney general sued 13 poultry companies, claiming they had damaged one of the state’s most important watersheds.

It is often difficult to definitively link a specific instance of disease to one particular cause, like water pollution. Even when tests show that drinking water is polluted, it can be hard to pinpoint the source of the contamination.

Despite such caveats, regulators in Brown County say they believe that manure has contaminated tap water, making residents ill.

“One cow produces as much waste as 18 people,” said Bill Hafs, a county official who has lobbied the state Legislature for stricter waste rules.

“There just isn’t enough land to absorb that much manure, but we don’t have laws to force people to stop,” he added.

In Brown County, part of one of the nation’s largest milk-producing regions, agriculture brings in $3 billion a year. But the dairies collectively also create as much as a million gallons of waste each day. Many cows are fed a high-protein diet, which creates a more liquid manure that is easier to spray on fields.

In 2006, an unusually early thaw in Brown County melted frozen fields, including some that were covered in manure. Within days, according to a county study, more than 100 wells were contaminated with coliform bacteria, E. coli, or nitrates — byproducts of manure or other fertilizers.

“Land application requirements in place at that time were not sufficiently designed or monitored to prevent the pollution of wells,” one official wrote.

Some residents did not realize that their water was contaminated until their neighbors fell ill, which prompted them to test their own water.

“We were terrified,” said Aleisha Petri, whose water was polluted for months, until her husband dumped enough bleach in the well to kill the contaminants. Neighbors spent thousands of dollars digging new wells.

At a town hall meeting, angry homeowners yelled at dairy owners, some of whom are perceived as among the most wealthy and powerful people in town.

One resident said that he had seen cow organs dumped on a neighboring field, and his dog had dug up animal carcasses and bones.

“More than 30 percent of the wells in one town alone violated basic health standards,” said Mr. Hafs, the Brown County regulator responsible for land and water conservation, in an interview. “It’s obvious we’ve got a problem.”
Skip to next paragraph
Toxic Waters
260 Million Gallons

Articles in this series are examining the worsening pollution in American waters, and regulators’ response.
All Articles in the Series » Video Trailer for Next Installment
Find Water Polluters
Near You

Search data on more than 200,000 facilities around the nation permitted to discharge pollutants.
Clean Water Act Violations: The Enforcement Record

Readers shared their thoughts on this article.

But dairy owners said it was unfair to blame them for the county’s water problems. They noted that state regulators, in their reports, were unable to definitively establish the source of the 2006 contamination.

One of those farmers, Dan Natzke, owns Wayside Dairy, one of the largest farms around here. Just a few decades ago, it had just 60 cows. Today, its 1,400 animals live in enormous barns and are milked by suction pumps.

In June, Mr. Natzke explained to visiting kindergarteners that his cows produced 1.5 million gallons of manure a month. The dairy owns 1,000 acres and rents another 1,800 acres to dispose of that waste and grow crops to feed the cows.

“Where does the poop go?” one boy asked. “And what happens to the cow when it gets old?”

“The waste helps grow food,” Mr. Natzke replied. “And that’s what the cow becomes, too.”

“All of our waste management is reviewed by our agronomist and by the state’s regulators,” he added. “We follow all the rules.”

But records show that his farm was fined $56,000 last October for spreading excessive waste. Mr. Natzke declined to comment.

Many environmental advocates argue that agricultural pollution will be reduced only through stronger federal laws. Lisa P. Jackson, the E.P.A. administrator, has recently ordered an increase in enforcement of the Clean Water Act. Tom Vilsack, the agriculture secretary, has said that clean water is a priority, and President Obama promised in campaign speeches to regulate water pollution from livestock.

But Congress has not created many new rules on the topic and, as a result, officials say their powers remain limited.

Part of the problem, according to data collected from the E.P.A. and every state, is that environmental agencies are already overtaxed. And it is unclear how to design effective laws, say regulators, including Ms. Jackson, who was confirmed to head the E.P.A. in January.

To fix the problem of agricultural runoff, “I don’t think there’s a solution in my head yet that I could say, right now, write this piece of legislation, this will get it done,” Ms. Jackson said in an interview.

She added that “the challenge now is for E.P.A. and Congress to develop solutions that represent the next step in protecting our nation’s waters and people’s health.”

A potential solution, regulators say, is to find new uses for manure. In Wisconsin, Gov. Jim Doyle has financed projects to use farm waste to generate electricity.

But environmentalists and some lawmakers say real change will occur only when Congress passes laws giving the E.P.A. broad powers to regulate farms. Tougher statutes should permit drastic steps — like shutting down farms or blocking expansion — when watersheds become threatened, they argue.

However, a powerful farm lobby has blocked previous environmental efforts on Capital Hill. Even when state legislatures have acted, they have often encountered unexpected difficulties.

But agriculture is among the state’s most powerful industries. After intense lobbying, the farmers’ association won a provision requiring the state often to finance up to 70 percent of the cost of following the new regulations. Unless regulators pay, some farmers do not have to comply.

In a statement, Adam Collins, a spokesman for the Wisconsin Department of Natural Resources, said farmers can only apply waste to fields “according to a nutrient management plan, which, among other things, requires that manure runoff be minimized.”

When there is evidence that a farm has “contaminated a water source, we can and do take enforcement action,” he wrote.

But anger in some towns remains. At the elementary school a few miles from Mr. Natzke’s dairy, there are signs above drinking fountains warning that the water may be dangerous for infants.

“I go to church with the Natzkes,” said Joel Reetz, who spent $16,000 digging a deeper well after he learned his water was polluted. “Our kid goes to school with their kids. It puts us in a terrible position, because everyone knows each other.

“But what’s happening to this town isn’t right,” he said.

1 Response to Many Ways Industrial Agriculture Is Making Us Sick