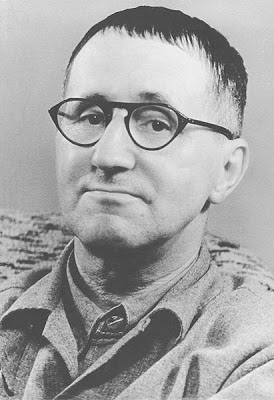 Bertolt Brecht lies in his grave. The alarm goes off and off. Time to get up again. Evil-doing comes like falling rain. Get up. We need you.

In the grey light before morning the pine trees piss
And their vermin, the birds, raise their twitter and cheep.
At that hour in the city I drain my glass, then throw
My cigar butt away and worriedly go to sleep.

No, up. Not sleep. Get up. It’s time. Fifteen days the rain is falling. The birds have stopped their cheeping. Cheep, BB, cheep at least. Twitter. Piss. Someone will hear. Someone will understand. Here’s my crust of bread. Eat, BB, eat, then speak. Get up and speak.

Like one whose blood flows from a wound and who awaits the doctor: his blood goes on flowing. So do we come forward and report that evil has been done.

Yes! Good. Come forward. Report. Report on the good times that starve the millions and poison the world.

The first time it was reported that our friends were being butchered there was a cry of horror. Then a hundred were butchered. But when a thousand were butchered and there was no end to the butchery, a blanket of silence spread. When evil-doing comes like falling rain, nobody calls out ‘stop!’

When crimes begin to pile up they become invisible. When sufferings become unendurable the cries are no longer heard. The cries, too, fall like rain in summer.

And rain also in winter. And the tree limbs snap, and the wires break, and people huddle under what blankets they have, and the circus band blares out its tunes, and some there cackle and others smirk. I am discouraged, BB. What will become of us?

Of those cities will remain what passed through them, the wind!

And then? When it all comes crashing to the ground, what then? What shall we do?

— Remember:
Hatred, even of baseness
Contorts the features.
Anger, even against injustice
Makes the voice hoarse. Even we,
Who wanted to prepare the ground for friendliness
Could not ourselves be friendly.

Bertolt Brecht wrote poems and essays and plays. He spoke up for the poor. He said, “First, people have to be able to feed their faces — then they can think about morality.” He was number one on Hitler’s hit list. We need his voice today.

Here — from the grave — is what he says:

Nowadays, anyone who wishes to combat lies and ignorance and to write the truth must overcome at least five difficulties. He must have the COURAGE to write the truth when truth is everywhere opposed; the KEENNESS to recognize it, although it is everywhere concealed; the SKILL to manipulate it as a weapon; the JUDGMENT to select those in whose hands it will be effective; and the CUNNING to spread the truth among such persons.” – Bertolt Brecht, Five Difficulties in Writing the Truth