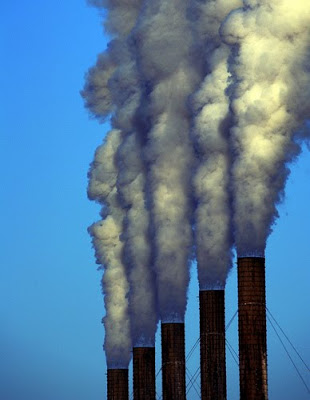 Image from This Week in Nuclear.
Radioactive fallout:
Vermont Yankee one of 27 U.S. reactors
Known to leak carcinogenic tritium

Like a decayed flotilla of rickety steamers, at least 27 of America’s 104 aging atomic reactors are known to be leaking radioactive tritium, which is linked to cancer if inhaled or ingested through the throat or skin.

The fallout has been fiercest at Vermont Yankee, where a flood of cover-ups has infuriated and terrified near neighbors who say the reactor was never meant to operate more than 30 years, and must now shut.

In 2007 one of Yankee’s 22 cooling towers simply collapsed due to rot.

Now the Nuclear Regulatory Commission has confirmed tritium levels in a monitoring well at Vernon to be 3.5 times the federal safety standard. The leaks apparently came from underground pipes whose very existence was recently denied by VY officials in under-oath testimony at a public hearing. Vermont’s pro-nuclear Republican Governor Jim Douglas has termed the event “a breach of trust that cannot be tolerated.”

Yankee is owned by Entergy, a Mississippi-based consortium that also owns New York’s Indian Point reactor, which suffered an internal gusher of radioactive water in May, 2009. Another leak has just been found at Oconee in South Carolina. Illinois’ Braidwood leaked so many millions of gallons of tritium-laced water that its owner, Exelon, was forced to buy a new municipal water system for a nearby town.

Entergy says none of Yankee’s tritium has been found in local drinking water or in the Connecticut River, which supplies the plant’s cooling water. Vernon sits near Vermont’s southeast border with Massachusetts, across the river from New Hampshire. “The existence of tritium in such low levels does not present a risk to public health or safety whatsoever,” says the company’s Robert Williams.

But VY is just the latest of more than two dozen U.S. nuclear plants — many built in the 1960s and ’70s — to be found with leaking tritium.

Last year at New Jersey’s Oyster Creek, tritium was reported leaking a second time shortly after Exelon got it a 20-year license extension. Entergy’s Pilgrim reactor, at Plymouth, Massachusetts, has recently leaked tritium into the ground.

The NRC’s Neil Sheehan has confirmed leaks involving 27 of 104 licensed U.S. reactors, and says that probably doesn’t account for all of them. At Yankee, Oyster Creek and elsewhere, rotting pipes are the likeliest culprit, but no one is 100% certain.

The epidemic has escalated public dismay. Vermont state Representative Tony Klein, chair of House Natural Resources and Energy Committee, says that “when you have public officials that the public depends on for their health and welfare making casual statements that a radioactive substance is not harmful to you, I think that’s ludicrous.”

For decades the Encylopedia Britannica, National Academy of Sciences and other primary scientific bodies have confirmed that no dose of radiation, no matter how small, can ever be deemed perfectly safe. “There is no threshold of exposure below which low levels of ionizing radiation can be demonstrated to be harmless or beneficial,” says Richard R. Monson, associate dean for professional education and professor of epidemiology at the Harvard School of Public Health.

Thus far the NRC has granted a series of license renewals to aging reactors. But by virtue of a long-standing agreement with Entergy, the Vermont Legislature can deny Yankee’s request for a 20-year extension. In the 1990s local groups like the Citizen’s Awareness Network helped force down the Yankee Rowe plant on the Deerfield River in Massachusetts, about 25 miles southwest of Vernon. The root cause was concern over embrittlement of the elderly reactor’s core, a key to the future of all other aging nukes.

In Vermont, angry debate has also arisen over Entergy’s dwindling decommissioning fund, which has been slashed by a declining stock market. Entergy has proposed spinning off plant ownership to a shell corporation whose assets may be even more dubious. But area residents also fear Entergy may be pushing Yankee operations in an attempt to find the source of its leaks.

With VY operating under duress, Katz and others report an increasing wave of concern among local citizens starting to think seriously about how they might evacuate if Entergy keeps pushing. “This plant appears to be leaking from its reactor piping, but they don’t really know where,” she says. “They don’t want to shut down because they’re afraid they’ll never get back up. Entergy is choosing to protect its bottom line rather than the health and safety of our community.”

Indeed, a desperate national industry now pushing for massive federal subsidies to build new reactors may not survive a flood of elderly clunkers being forced to close by the weight of their own contamination. “This is an industry trying to build a new fleet of Titanics while the old ones are sinking,” says Katz.

Amidst the gusher of tritium leaks, Governor Douglas wants to postpone the legislature’s vote on VY’s license extension. But his term expires in November, and all five Democratic gubernatorial candidates are pledged to a Yankee shutdown.

What happens next will be defined by fierce grassroots activism crashing into a flood of corporate money in support of a rickety old reactor being operated with increasing recklessness.

The highly hyped “reactor renaissance” — and much more — may hang in the balance. Stay tuned.

[Harvey Wasserman is Senior Advisor to Greenpeace USA and the Nuclear Information and Resource Service, and Senior Editor of www.freepress.org, where this article also appears. His Solartopia! Our Green-Powered Earth is at www.harveywasserman.com.]