MARIANN G. WIZARD :
BOOKS | ‘Life Is a Butt Dial: Tales from a Life Among
the Tragically Hip’ 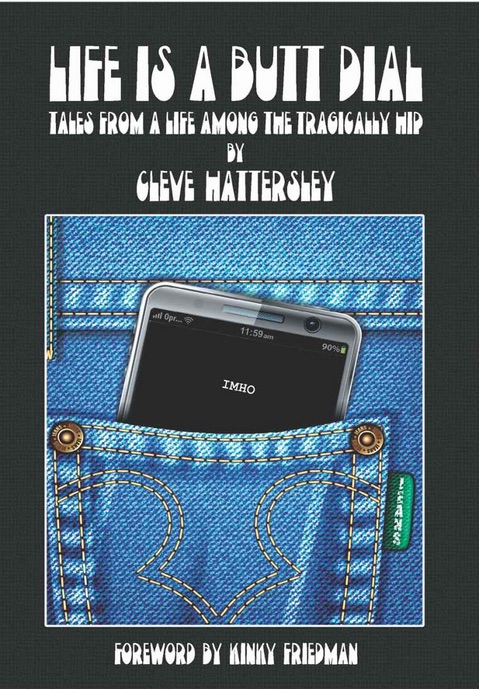 When it’s the Dog Days and the second summer of Covid and the headlines are ugly and even Cousin Junebug has stopped posting up cute puppy pictures, it’s time for a cool, light summer read!

Candidly crediting always having the best weed for his easy camaraderie with many of the biggest names in show business and sports over the last half-century, Cleve name-drops unabashedly, and why should he be abashed? From James Brown and Bo Diddley to Abbie Hoffman and Robin Williams to the New York Yankees, he toked, joked, and/or coked with the stars and celebs in greenrooms, hotel rooms, locker rooms, and night clubs after closing, when the real jams come out.

The book is a lot lighter on autobiographical details
than most memoirs.

The book is a lot lighter on autobiographical details than most memoirs, maybe because Cleve has seen up close the pitfalls of confusing private life with one’s cool stories. But for many Rag Blog readers, that won’t be a problem, because we’ve “known” Cleve, his fine fiddlin’ wife Sweet Mary, and melodious rock diva sister Lissa Hattersley since the Olden Days.

Cleve worked at the Fillmore East in New York City for Bill Graham, along with about 10 other people from his hometown, Canandaigua, New York, most of them sharing an apartment on East Third Street and a fondness for the great Jewish dairy foods at Ratner’s Restaurant. He went back and forth to San Francisco a lot and could hang out at the Fillmore West whenever he was there. San Francisco was crawling with exploring Austinites at the time. In Haight-Ashbury, he met soon-to-be 13th Floor Elevators front man Roky Erickson through Big Rikki Moursund (later to become The Guacamole Queen of the Armadillo World Headquarters), a meet-up that in some fateful sense “pointed him to Texas.”

Greezy Wheels, the ever-evolving band/family/multi-media event of which Cleve, Mary, and Lissa are the cohesive core, started entertaining Austin audiences in the early 1970s and became “the de facto house band” at the ‘Dillo. Like a lot of other people trying to make ends meet, Cleve also sold marijuana. Starting in 1973, he did 11 months in Huntsville (seat of Texas’ prison industry) on a seven-year sentence. Like any sensible person in any jail where the option exists, he began to attend church and sing in the church choir. This is a way to accrue good time for early release. But after one church solo that had “everybody but the warden dancing in their seats,” he was told by said warden to “never again” do that in his church! But he was no fool, this warden, and assigned Hattersley to the Prison Rodeo Band, where he performed, among other tunes, a signature version of “Stagger Lee,” delighting attendees of these popular public events.

Greezy Wheels recorded two albums with London Records, in London, England, but did not rocket to superstardom. As other Texas musicians have observed, it gets mighty cold in England. Later on, he managed both the iconic Lone Star Cafe and Blue Note Jazz Club in NYC, sites of many of his celebrity encounters. I’m not sure how all of those events fit together — they pop up in short chapters that don’t run chronologically — but it doesn’t really matter, it’s the “cozmic connections” that pop anyway.

Returning to Austin, the band was reborn with old and new members. They played just about everywhere around Texas and elsewhere and pulled their fair share and more of benefits for worthy causes. In 2013 they were inducted into the Austin Music Hall of Fame, and everyone who had ever been in the band for the previous 50 years – 18 people! – took the stage as a group.

In the first decade of the 2000s, Cleve managed, as much as anyone could have managed, singer/songwriter/entertainer Kinky Friedman’s two runs for Governor of Texas as an independent candidate. Friedman, the self-styled “Texas Jewboy” from Kerrville, coulda been a contender, maybe, but made the mistake of writing — and then believing — his own p.r. He turned out at the time to be all hat and no cattle in terms of policy initiatives that might have galvanized voters looking for an alternative to Tweedledumb and Tweedledumber. More recently, Kinky has written well-turned mystery tales, with himself, the performer, as an unlikely-but-lucky sleuth. Lately he’s returned to recording, I’m told, with a more serious and, shall we say, “adult” perspective. If this trend continues, he might make a fine US Senator one day!

As Cleve’s mostly humorous tales unfurl and meander, never in a straight line, from coast to coast and show to show, the source of his equanimity and the book’s title begin to emerge. Shit happens: shows get cancelled, the bus breaks down, deals go sour, people quit on you, your heart’s desire changes, and it doesn’t help to get mad. Personally somewhat brash and effusive, Hattersley does a cute shtick in the book, portraying himself as a shy slacker with a sensitive stomach and an allergy to stress. He did not include some of the most challenging “butt dials” life has handed him and Mary – see above re private life vs. fun stories — but let’s just say this: even if it’s a big ol’ “butt dial,” Cleve is gonna answer the phone!

The road goes ever onward and it’s the music, and the community the music creates, that count.

The road goes ever onward and it’s the music — and the community the music creates – that count, finally. Greezy Wheels has always been distinguished by its harmonies as well as its members’ individual virtuosity, both reflected in this charming account. And Cleve Hattersley may have lived life in the fast lane, but he’s a savvy driver. Despite its gossipy tell-all tone, Life Is a Butt Dial isn’t going to hurt anybody. The few folks he describes as harses arses already know they are and are proud of it! And in these times, its underlying kindness is worth the ticket price to this tilt-a-whirl of tales.

The book has a selection of colorized and black and white images that will resonate with anyone who ever danced at the One Knite, Soap Creek Saloon, Houston’s Liberty Hall, any of Willie’s picnics, the Lone Star Cafe, or any other legendary music scene; pure candy! And at the very end, a surprising (to me!) dozen of Cleve’s marvelous sketch portraits of illustrious faces capture a dash of star dust.

The only thing that might make this book more fun would be a selection of Greezy’s tunes, oh, but look: there are more cool photos and links to Greezy music (and some awesome videos!) at www.greezywheels.com! My new fave: “In the Still of the Night.” Oh! my goodness, SWEET Mary!! And there’s even more on YouTube.com, including 2019’s “White Fear in America” at Greezy Wheels — White Fear In America — YouTube. The pandemic has disrupted live music to a shocking degree, and sidelined book launch events for Life Is a Butt Dial, but these guys don’t quit. Check it all out, Sweet Peeps, and remember to support independent artists, writers, and musicians like Cleve Hattersley and Greezy Wheels! Keep on dancing!

Mariann Garner-Wizard was among the founders of The Rag, The Rag Blog‘s print predecessor, and active in civil rights and liberties, antiwar, and other progressive movements. She claims credit, with three others, for the fact of public ownership of Austin’s Public Access Television Studio. She has authored three books of poetry, a hempseed nutrition cookbook, and a satiric history of the Republican Party; co-authored a 1972 study of the antiwar movement in the US military; and is found in social histories, poetry journals, and activist publications. Her papers are available to researchers at the Briscoe Center for American History, the University of Texas at Austin. Mariann is a regular contributor to publications of the American Botanical Council). She lives in Belize, Central America, but nowhere near the beach.

This entry was posted in RagBlog and tagged Books, Cleve Hattersley, Greezy Wheels, Life Is a Butt Dial, Memoir, Rock and Roll. Bookmark the permalink.