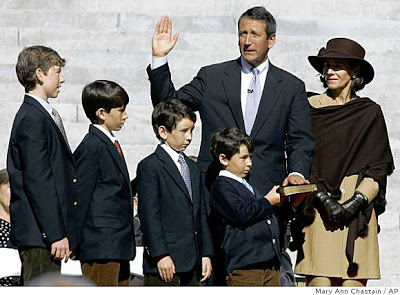 South Carolina Gov. Mark Sanford takes the oath of office for a second term in 2007 with his wife, Jenny, and sons (from left) Marshall III, Landon, Bolton and Blake. Lessee, that’s two oaths down and counting. Photo by Mary Ann Chastain / AP.

Sanford’s admission of the affair this week… was the stuff of nightmares for Republican Party leaders.

The GOP has gone through some rough political patches, but thanks to the tabloid-style love tango between high-profile South Carolina Gov. Mark Sanford and his mysterious Argentine mistress, the party and its prospects for 2010 and beyond are looking colder than a Patagonian winter.

Sanford’s admission of the affair this week — he told staffers he was taking an extended hike on the Appalachian Trail but later was caught stepping off a plane from Buenos Aires — was the stuff of nightmares for Republican Party leaders.

Once considered on the short list for a 2012 presidential bid, Sanford instead became the target of late-night comedians for going missing from his state job and being unfaithful to his wife.

His amorous adventure leaves the GOP’s top leadership bench for next year’s congressional elections and the 2012 presidential contest looking decidedly empty. It comes on the heels of problems involving some of its aspiring stars, with questions of hypocrisy swirling over a party that holds up moral values and the sanctity of marriage.

Last week, Nevada Sen. John Ensign, chairman of the Republican Policy Committee, admitted to an affair with a former staffer. That followed a parade of headlines about other conservative GOP legislators in recent years: Idaho Sen. Larry Craig, caught soliciting sex from a man in a public restroom; and junior Louisiana Sen. David Vitter, considered one of the GOP’s hopes for 2010, who turned up on the client list of the notorious “D.C. Madam.”

In addition, Alaska Gov. Sarah Palin, last year’s GOP vice presidential candidate and still a favorite of conservatives, has been hurt by news about her daughter, an unwed mother, as well as by alleged ethics violations and questions about her public relations judgment after laying into late-night TV host David Letterman for his jokes about her.

Sanford’s spectacular meltdown over infidelity — the second such scandal in two weeks with a major party figure – underscores the pressing need for new faces and leaders to take the Republican Party into the future, some political activists say.

“The party is at a real crossroads and needs to figure out who the voices of the future are,” said Mindy Tucker Fletcher, spokeswoman for the 2000 presidential campaign of George W. Bush, “and let them run, let them speak and promote them. There are growing pains. The key word is ‘pain.’ “

Give women a chance

Andrea Dew Steele, founder and president of Emerge America, a national organization based in San Francisco that trains Democratic women to run for office, agreed that the Sanford scandal poses a challenge that applies to both political parties. “Let’s see if we can elect more women to office,” she said, “and give them a chance to see if they can do better in power.”

Still, GOP members were furious with the South Carolina governor, not only for his particularly wacky behavior that included deserting four children on Father’s Day weekend to meet up with his paramour but also going MIA from his job.

Equally galling was his timing — the Sanford scandal exploding just as Republicans were gaining ground in the polls on President Obama and the Democrats on issues like the size of the federal deficit and concerns over Obama’s health care policy.

“I am mad enough to swallow a horned toad backward,” GOP strategist Patrick Dorinson of Sacramento wrote on Politico.com. “In my mind he is… a pitiful excuse for a real man. He not only has feet of clay, he has a spine of one as well.”

While Sanford’s aides suggested that he would hang tough and not resign, many party activists took to the airwaves to urge him to give up – and go away.

“I suggest he get out of office right now and let us be done with this whole sordid affair,” GOP strategist Trent Duffy told MSNBC. “Some of these people who have lost the public trust need to hang it up…This is a bad day for Republicans. Our party does need fresh faces. Maybe we can get a community organizer who can come out of nowhere and become the president of the United States.”

Tucker Fletcher, a leading endorser of California GOP gubernatorial candidate Meg Whitman, said female candidates could be the answer. She argued that the former eBay CEO’s effort to get elected in California shows how the GOP can put those concerns into action — and take the call for change seriously.

“I’m optimistic that it will get better,” Tucker Fletcher said, “but we keep going back to the scenario of women and blacks and people we want to join our party. We have to give them a reason to. We have to resonate with a bigger cross-section of people.”

Thanks to BuzzFlash / The Rag Blog