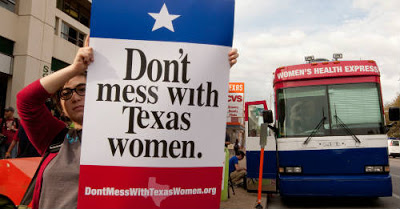 Low-income women are being hit hardest by the legislative cutbacks, the study’s authors note.

Deep slashes to family planning funds made during Texas’ last legislative session have caused 53 clinics that provide family planning services to shutter their doors, according to a new article in the New England Journal of Medicine.

Additionally, 38 clinics reduced their hours, and many of the existing clinics have been forced to lay off staff and cut back basic services as a result of “the most radical” legislative effort to curb reproductive health funding in the nation, the study finds.

These findings mark the first stage in an ongoing three-year analysis — conducted by the Population Research Center at the University of Texas at Austin — of the short- and long-term effects of Texas’ budget cuts to family planning services and reproductive health care.

During the 2011 legislative session, lawmakers decreased family planning dollars from $111 million to $38 million over two years and created a three-tiered funding system, which granted priority funding to “comprehensive” primary care providers (known as “federally qualified health centers“) and placed clinics that primarily provide family planning services, like Planned Parenthood, at the bottom of the funding pyramid.

In response to the legislative cuts, the Texas Department of State Health Services reduced the number of funded family planning agencies from 76 to 41, as noted in the study. DSHS spokesperson Chris Van Deusen told The American Independent in an email that there were 300 state-supported family planning clinics in 2011, and this year there are 143.

To get those numbers, the sociologists conducting this research surveyed 56 reproductive health service directors, who shared on-the-ground realities of the drastic cuts. Researchers were told that many clinics reduced their services in response to the budget cuts.

“Facing severe budget cuts, most clinics have restricted access to the most effective contraceptive methods because of their higher up-front costs,” the report says.

For instance, methods such as the intrauterine device (IUD), typically costing clinics around $250 each, are now rarely offered. Patients are being directed toward birth control pills as a result, but even then, fewer packs of pills are disbursed per visit, which can end up decreasing the likelihood that women will actually continue the drug. In turn, that can potentially lead to higher rates of unintended pregnancy and abortion, the report says.

The projection falls in line with estimates from the bipartisan Legislative Budget Board, which — in an analysis obtained last year by The Texas Observer — predicted that family planning budget cuts could lead to more than 20,000 additional births for women eligible for Medicaid.

“The health community is raving about how the most promising opportunity to decrease the rate of unintended pregnancy in the future is in these long-acting methods, like IUDs,” University of Texas at Austin professor Joseph Potter, who co-authored the study, told TAI. “And here we are, pretty clearly going backward, not forward.”

The extensive cuts are also forcing providers to charge women for services once covered by public funds. According to the study, those who are unable to pay the newly adopted fees for services like preventative well-woman exams are turned away, and those who can pay are opting for less effective methods of contraception, buying fewer pill packs, and forgoing sexually transmitted infection testing.

In addition, out of those surveyed, 35 organizations can no longer provide discounted contraceptives and are no longer exempt from parental consent laws for teens seeking access to birth control. As a result, teens must travel farther to get contraceptives. Texas has one of the highest rates of teen births in the nation, ranking fourth overall in 2010, with 52.2 births per 1,000 women aged 15 to 19, according to the Centers for Disease Control and Prevention.

As funding is slashed, surviving clinics are increasingly dependent on the Medicaid-based Women’s Health Program for service reimbursements, Potter said, but 90 percent of the federal-state program is slated to be cut due to objections raised by conservative lawmakers over Planned Parenthood’s inclusion in the funding stream, signifying an even greater burden on the already fragile network.

To offset the shortage of providers in the ragged landscape, researchers found, local hospitals in some communities are offering their space and services to help care for women, but they too are strained.

“We are witnessing the dismantling of a safety net that took decades to build and could not easily be recreated even if funding were restored soon,” the report says.

Potter cast serious doubt on the ability of the network to absorb displaced WHP patients.

“It’s very hard to imagine how a whole new infrastructure is somehow going to take over that volume of services,” he said. “Jeopardizing the interdependence between the clinics and the program may well cause the leaky ship to sink.”

Low-income women are being hit hardest by the legislative cutbacks, the study’s authors note, writing: “Disadvantaged women must choose between obtaining contraception and meeting other immediate economic needs. And, as one of our interviewees pointed out, providers are put in the position of ‘trying to decide, out of the most vulnerable, who is the most, most vulnerable.’”

Potter testified at a recent Department of State Health Services public hearing on the exclusion of Planned Parenthood from the Women’s Health Program. He described family planning clinics as being on the “edge of survival.” The clinics’ legs have been severely weakened, he said at the time, and the network is stressed overall, leading to deeper reductions in contraception access.

Potter told TAI that his next step is conducting focus groups across eight regions in the state to evaluate how women are reacting to the changes in reproductive health care. Ideally, the data collected thus far will aid in the decision-making process during the upcoming 2013 legislative session, but the full impact won’t be felt until the following session, he said.

While the study says that “[t]ime will reveal the full effects of these budget cuts on the rates of unintended pregnancies and induced abortions and on state and federal health care costs,” current damage is apparent.

“Already, the legislation has created circumstances that force clinics and women in Texas to make sacrifices that jeopardize reproductive health and well-being,” the study says.

The study’s authors suggest the landscape in the Texas may serves as a cautionary tale to other states seeking to curb family planning funds.

“Texas’s experience may be a harbinger of the broader impact of eliminating public funding for family planning,” the report says.

The report concludes that members of Congress and state lawmakers “should consider the results of such research and take a hard look at the implications for women, families, and communities of restricting access to contraception.”

[Mary Tuma is a reporter for The American Independent. She has worked for The Houston Chronicle and Community Impact Newspaper, and interned at The Texas Observer. Tuma graduated from The University of Texas’ School of Journalism where she served as an associate editor at The Daily Texan and was president of the Society of Professional Journalists. Read more articles by Mary Tuma on The Rag Blog.]