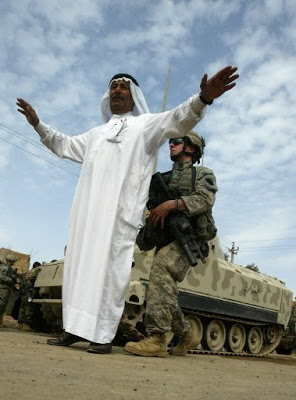 A senior enlisted U.S. Army soldier — Master Sergeant John Hatley — was convicted two days ago by a military jury in Germany of executing four handcuffed, blindfolded Iraqi men by shooting them in the backs of their heads.

That’s a newsworthy (and, of course, gruesome) story in and of itself, but there’s a story behind the story.

Many readers will recall the case of Scott Beauchamp — the Army Private who took his story of out-of-control soldiers in the line of duty to the pages of The New Republic and soon thereafter found himself on the receiving end of attacks from conservatives across the establishment and beyond.

Some of those conservatives, including the Weekly Standard’s Michael Goldfarb, participated in a concerted (and inaccurate) effort to discredit Beauchamp and tar, for lack of patriotism, the notoriously dovish New Republic and, by association, liberals everywhere.

For his reporting, Goldfarb relied on some…let’s call them
“questionable” sources and even got an assist, in a bizarre breach of protocol, from Beauchamp’s First Sergeant, who took to the blogosphere to make the case against the beleaguered Private. “My soldiers [sic] conduct is consistently honorable.”

This soldier has other underlining [sic] issues which I’m sure will come out in the course of the investigation. No one at any of the post we live at or frequent, remotely fit the descriptions of any of the persons depicted in this young man’s fairy tale. I can’t and won’t divulge any information regarding this soldier, but I do sincerely appreciate all the support from the people back home. Again, this young man has a vivid imagination and I promise you that this by no means reflects the truth of what is happening here.

The name of that Non-Commissioned Officer might ring a bell: John Hatley. And he seems to have protested a bit too much. Hatley had, in fact, committed the murders before he took to the Internet to defend himself and his fellow soldiers against charges of recklessness. We excitedly await Goldfarb’s statement on the issue.

Goldfarb, you might remember, turned his 15-minutes of fame into a campaign seasons’ worth, serving as deputy communications director for John McCain’s presidential bid during which time he put his deep concern for the facts to good use. After that bid failed, he returned to the Weekly Standard, which seems to regard the entire episode as a job well done.